Missiles strike Syrian Army sites, speculation is that Israel might be responsible 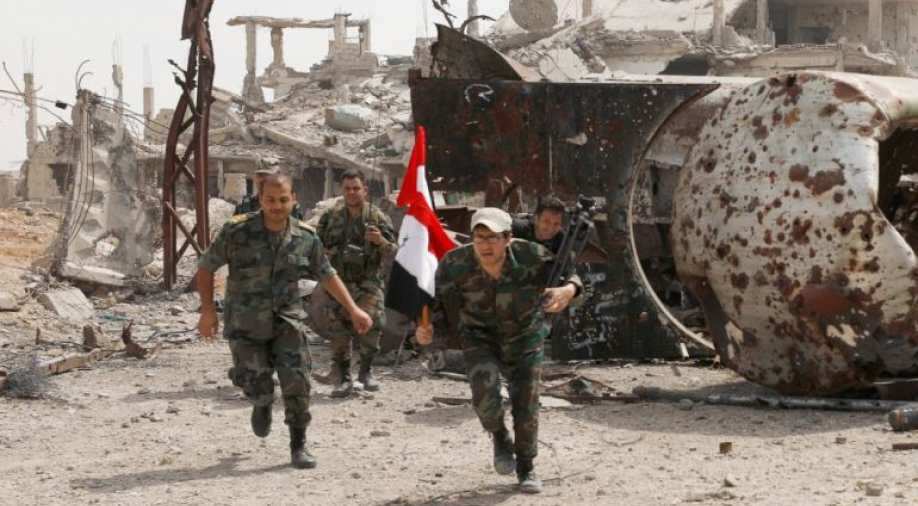 The Syrian army unleashed a massive bombardment against one rebel enclave on Monday and prepared for the withdrawal of insurgents from another as President Bashar al-Assad pushes to crush the rebels' last besieged strongholds.

However, missile strikes against several government military bases on Sunday - not claimed by any party despite speculation in Israel that its military was responsible - underscored the risks of a wider escalation in the seven-year conflict.

More than 140 Syrian army air strikes hit the town of Rastan and surrounding villages in the rebel enclave between the cities of Hama and Homs early on Monday alongside sustained shelling, the Syrian Observatory for Human Rights war monitor said.

Last week a Syrian government minister said the enclave would be the army's next target after retaking all rebel areas around the capital, a goal it looks closer to achieving with Monday's expected insurgent withdrawal from south Damascus.

Despite Assad's ever-stronger position against rebels since Russia's entry into the war in 2015 brought a string of battlefield victories, the involvement of numerous regional and global powers threatens to inflame the war further.

Nobody has claimed responsibility for the missile attacks that struck several bases near Hama and Aleppo overnight, causing large explosions, and the Syrian army has blamed only "aggression" by its enemies.

However, Israel has previously carried out strikes in Syria to stop Assad's ally Iran getting stronger there or transferring weapons to the Lebanese group Hezbollah, and there is widespread speculation in Israel that it was behind the attack.

Israel's Intelligence Minister Israel Katz would not comment on the strikes, but added that Israel "has made it unequivocally clear at all levels that it will not allow an Iranian front in Syria to be established".

A spokesman for Israel's military said it would not comment on foreign reports. But Amos Yadlin, a former head of Israeli military intelligence, said Israel was likely behind the strikes.

"Israel has to decide: 'are we confronting Iran in Syria before they have the full advanced weapons capabilities' ... or do we wait ... let them build a huge military capability in Syria and meet them in a future war and pay a very high price?"

Diplomats have warned of a possible major escalation between Israel and Iran in Syria as Assad and his allies take more territory from rebels.

The United States, Jordan and Assad's main ally Russia have declared a ceasefire zone in southwest Syria, near the border with Israel, and on Monday Secretary of State Mike Pompeo said Washington's strategy there "remains unchanged".

The Observatory said at least 26 people - mostly Iranians and members of an Iran-backed Iraqi militia - were killed in Sunday's strikes, and that dozens more people were missing.

Speaking in Israel on Sunday, Pompeo said the United States was "deeply concerned about Iran's dangerous escalation of threats towards Israel and the region" and said it was critical for the two allies to work together to stop it.

Iran's semi-official Tasnim news agency said no Iranian base had been hit or Iranians killed. Alaeddin Boroujerdi, a senior Iranian member of parliament met Assad on Monday and said Iran would keep its military advisers in Syria until the war ended.

Tehran and its allies blamed Israel for an April 9 air strike on the Tiyas air base in Syria, in which several Iranian military personnel were killed, and Iran has warned it would not go "without response".

The Syrian army's assault on the pocket between Homs and Hama - the most populous remaining besieged area in Syria - included air strikes and artillery, said the Britain-based Observatory.

Reinforcements arrived in government-held areas before the bombardment, which targeted Rastan, the biggest town in the pocket, and several nearby villages, the Observatory said.

Syrian rebels hold large swathes of both northwest and southwest Syria. An alliance of Kurdish and Arab militias backed by the United States holds large parts of northern and eastern Syria after an offensive against Islamic State last year.

The pocket in southern Damascus is split between areas held by Islamic State and rebel groups. It has been the focus of a massive bombardment and intense fighting since the Syrian army recaptured eastern Ghouta earlier this month.

Late on Sunday, state media reported that one of the rebel groups there, the jihadist Tahrir al-Sham alliance, which includes Syria's former al-Qaeda affiliate, had agreed to withdraw to opposition-held Idlib province in northern Syria.

Footage on state television on Monday showed what it said was preparations for that withdrawal, along with the departure of buses in northern Syria to evacuate civilians from two government-held villages besieged by insurgents.

The surrender deal for Tahrir al-Sham in south Damascus was part of a deal to allow about 5,000 people to leave the two government-held Shi'ite villages, al-Foua and Kefraya, it said.

However, SANA state news agency reported continued intensive bombardment of al-Hajar al-Aswad, another area in the south Damascus pocket where Islamic State fighters are based.