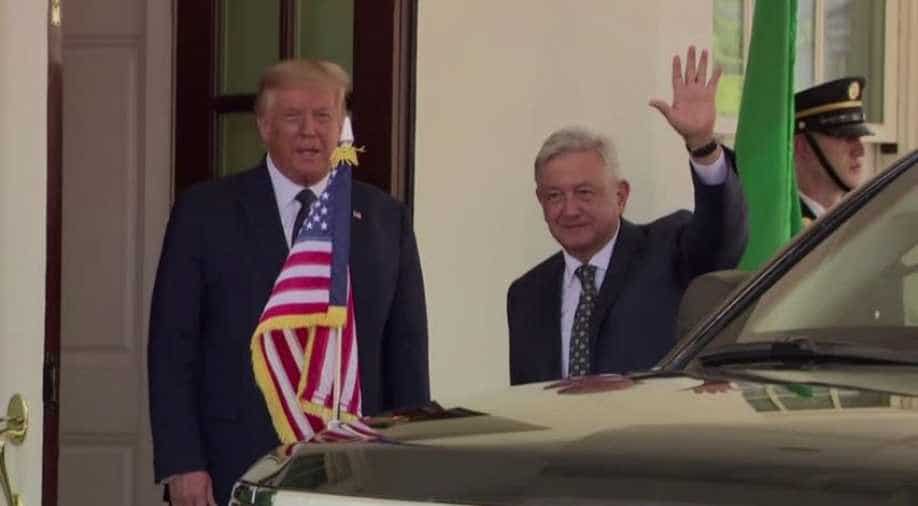 The spectacle of Lopez Obrador and Trump lavishing praise on each other on Wednesday was a far cry from the tension that has plagued bilateral ties since the American launched his bid for power in 2015 with repeated threats and jibes against Mexico.

Defying warnings that to seek out Donald Trump was to court disaster, Mexican President Andres Manuel Lopez Obrador instead emerged from their first meeting as a "cherished friend" of his U.S. counterpart, even as some Democrats looked on uneasily.

The spectacle of Lopez Obrador and Trump lavishing praise on each other on Wednesday was a far cry from the tension that has plagued bilateral ties since the American launched his bid for power in 2015 with repeated threats and jibes against Mexico.

Meeting at the White House, the two leaders pledged to strengthen economic ties, and largely avoided the subject of immigration that Trump has used to extract concessions from Mexico on border security and trade since he took office in 2017.

"The forecasts were wrong. We didn`t fight. We`re friends and we`re going to continue being friends," Lopez Obrador said, the leftist leader facing Trump as the two addressed the media before a dinner at the White House.

But while Mexican officials celebrated the generous words and warm sentiments, some Democratic lawmakers expressed concern that the encounter had been little more than a campaign ploy by the Republican Trump as he seeks to secure re-election in November.

"I think the meeting, for the most part, was a dog and pony show," Jesus Garcia, a Mexican-born Democratic congressman from Illinois, told cable TV network C-SPAN.

"It`s also very telling that President Lopez Obrador would come and only meet with President Trump and not even arrange for a phone call with (Joe) Biden," he added.

Lopez Obrador said he would take no sides in the U.S. election and that it would not be right for him to speak to former Vice President Biden as the Democratic presidential candidate because he was on a work visit to Washington.

Garcia was one of more than a dozen members of the Hispanic Caucus - all of them Democrats - who in a letter had urged Trump to cancel the meeting, which they condemned as an attempt to distract from the coronavirus pandemic and to politicise U.S.-Mexico relations.

The United States is home to more than 35 million people of Mexican origin and critics of both leaders fear the get-together could help Trump woo voters from that community.

Trump described Mexican migrants as rapists and drug runners during his last election campaign, promising to keep them out with a border wall which he said Mexico would pay for.

Biden himself pointed to this in a terse statement issued shortly after the two leaders met.

On Wednesday, Trump struck a quite different tone, referring to Lopez Obrador and Mexico as "cherished friends."

"Mexican Americans uplift our communities and they strengthen our churches and enrich every feature of national life," Trump said. "They are hardworking, incredible people."

While in opposition, Lopez Obrador compared Trump to Adolf Hitler for his treatment of migrants. He pledged to defend them if he won the presidency, which he did in July 2018.

On Wednesday, Lopez Obrador thanked Trump for treating Mexico with "kindness and respect."

That angered domestic critics of the Mexican leader, who were also upset he did not publicly bring up the wall, or Trump`s attempts to repeal a program that has protected so-called Dreamer immigrants in the United States, many of Mexican origin.

In a statement, Sylvia Garcia, a Democratic congresswoman from Texas, expressed dismay that immigration had been ignored at the meeting, which she saw as "another White House photo op."

Even if Lopez Obrador`s intention had been to defend Mexico, his support for Trump only made it more likely that the real estate mogul would serve another four years, said Andres Rozental, a former Mexican deputy foreign minister.

"Trump has been bad news for Mexico for five years," said Rozental. "I`m afraid ... that he will use this to his political advantage and that we will be caught in the crosshairs again."

If Biden, who is leading in U.S. opinion polls, defeats Trump in November, Wednesday`s scenes in Washington could weigh on relations with a Democratic administration, said Jorge Buendia, head of Mexican polling firm Buendia & Laredo.

A Democratic government may also be less indulgent toward Lopez Obrador on his nationalist energy agenda, which has threatened major investments in renewable power generation, a key issue for many on the left of the U.S. political spectrum.