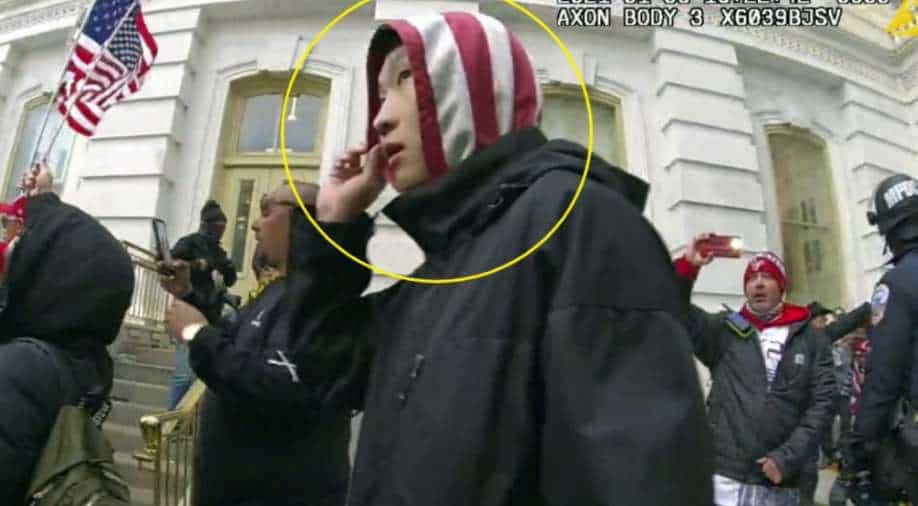 The reservist, Jia Liu, 26, of the New York City borough of Queens, and the nurse, Steven Rodriguez, 27, of Long Beach, New York, plotted to distribute the fraudulent vaccination cards to people who were not vaccinated, including Marine reservists who were trying to evade the Pentagon’s vaccine requirement for members of the military, prosecutors said

A Marine Corps reservist who was charged with entering the Capitol during the riot on Jan. 6, 2021, is now accused of conspiring with a nurse to steal, forge and distribute hundreds of fraudulent coronavirus vaccination cards, prosecutors said Thursday.

The reservist, Jia Liu, 26, of the New York City borough of Queens, and the nurse, Steven Rodriguez, 27, of Long Beach, New York, plotted to distribute the fraudulent vaccination cards to people who were not vaccinated, including Marine reservists who were trying to evade the Pentagon’s vaccine requirement for members of the military, prosecutors said.

Michael Driscoll, assistant director in charge of the FBI’s New York field office, said the scheme resulted in more than 300 stolen or false vaccination cards circulating through the community as well as the destruction of “multiple doses” of the coronavirus vaccine.

Liu was also charged with one count of conspiring to defraud the Defense Department for providing fraudulent vaccination cards to Marine reservists, prosecutors said.

“By deliberately distributing fraudulent COVID-19 vaccination cards to the unvaccinated, the defendants put military and other communities at risk of contracting a virus that has already claimed nearly 1 million lives in this country,” Breon Peace, U.S. attorney for the Eastern District of New York, said in a statement.

Both men pleaded not guilty Thursday in US District Court for the Eastern District of New York.

Benjamin Yaster, a lawyer for Liu, declined to comment on the charges.

“The charges are disturbing, obviously,” Gary Farrell, a lawyer for Rodriguez, said in an email. “This young man has no prior record and has a good family, which is why he was released on an unsecured signature bond with the consent of the government.”

Buyers could also be entered into immunisation databases, which allowed them to receive the Excelsior Pass, which displays a user’s vaccination status in a digital app, prosecutors said.

As part of the scheme, Liu bought blank vaccination cards from Rodriguez and then forged and distributed them for a profit, prosecutors said.

Liu also directed buyers to meet Rodriguez at his clinic in Hempstead, New York, which was not identified in court records, prosecutors said.

At the clinic, Rodriguez would destroy a vial of the vaccine, and then record the dose on a vaccination card as if he had administered it to the buyer, prosecutors said. He would then enter the information into immunization databases, falsely indicating that the buyer had been vaccinated, prosecutors said.

Both men promoted the scheme on encrypted messaging apps and on social media, using code names for the vaccination cards such as “gift cards,” “Cardi Bs,” “Christmas cards” and “Pokemon cards.”

Liu was already facing charges in connection with the riot on Jan. 6, 2021, when a mob of Donald Trump supporters stormed the Capitol and attacked police officers as Congress was seeking to certify the results of the 2020 presidential election.

Liu, who was seen on video footage entering the Capitol in a black jacket with an American flag hood over his head, was charged last year with four counts, including disorderly conduct in a capitol building, prosecutors said. That case is still pending.