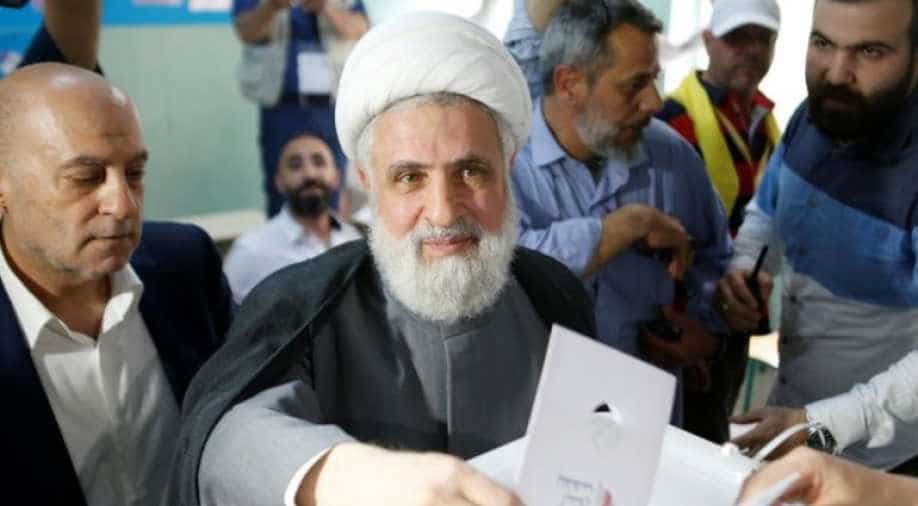 The two main protagonists of the country's first legislative polls in almost a decade did not wait for final results to comment on the implications of a vote which was also marked by low turnout.

Hezbollah leader Hassan Nasrallah called the vote "a great political and moral victory for the resistance option that protects the sovereignty of the country."

The Iran-backed Shiite movement and its allies look set to secure a parliament bloc large enough to thwart attempts for it to disarm, a longstanding demand of its political enemies.

"The make-up of the new legislative chamber represents a guarantee and a great strength to protect this strategic choice and to protect the golden equation -- the army, the people and the resistance," Nasrallah said.

The man who has led calls internally for Hezbollah to lay down its arms is Hariri, whose Sunni-dominated Future Movement -- less dominant since it lost Saudi Arabia's lavish support -- lost a third of its seats.

Hariri told reporters his party had won 21 seats, a drop from the 33 it controlled in the outgoing legislature.

"We were betting on a better result," the premier said.

Results announced late Monday by the interior ministry confirmed the trend, though vote counting had not yet ended in one electoral district.

The number of Hezbollah lawmakers in the 128-seat parliament may not increase from the current 13 but astute pre-electoral tactics have secured it enough allies to withstand challenges on strategic issues.

"Hariri's loss will be the distinguishing mark of these elections, which will have consequences on the battle to form a new government," the pro-Hezbollah Al-Akhbar daily wrote earlier on Monday.

Hezbollah, which was created in the 1980s to fight against Israel and currently battles in Syria alongside regime forces, is listed as a terror organisation by the United States.

The group, whose arsenal outguns the army's, does not derive its dominant status on the Lebanese scene from the ballot box but the new breakdown of parliament is set to increase its political legitimacy.

Lebanon's unique brand of sectarian-driven, power-sharing politics mean rival factions often end up in the same government, as is the case now where Hezbollah is represented in Hariri's cabinet.

"We hope that all Lebanese political stakeholders will continue to act responsibly in the days following polling to protect Lebanon's stability, which should include the swift formation of a government," said UN spokesman Stephane Dujarric.

The constitution stipulates that parliament is equally split between Muslims and Christians, whose biggest party, led by President Michel Aoun has been a Hezbollah ally.

"The biggest swing vote will be President Aoun's group, which will move among the other blocs. Hezbollah will benefit from the lack of a broad coalition against it," political analyst Imad Salamey said.

Lawmakers had extended their own mandate three times since 2009, ostensibly over security concerns linked to the war in neighbouring Syria and political divisions that led to long and crippling institutional crises.

A higher turnout than the 49.2 percent announced overnight had been expected after the long electoral hiatus but the new pre-printed ballots used Sunday appeared to confuse some voters.

Some voters also said the sometimes absurd web of local alliances that saw some parties work together in one district and compete in others had put them off.

Senior political leaders, including Hariri himself and Interior Minister Nohad Machnouk whose task it was to supervise the vote, admitted that new voting rules tested for the first time had been perplexing for the electorate.

Lebanon has often been a scene where the rivalry between the region's two heavyweights Iran and Saudi Arabia has played out, but their political clients in this election seemed content to maintain the status quo.

In line with the "national pact" dating from independence in 1943, the president must be a Maronite Christian, the prime minister a Sunni Muslim and the parliament speaker a Shiite.

Nabih Berri, who heads the Shiite party Amal and was allied with Hezbollah, looks certain to keep the position of speaker he has held since 1992.

And the Lebanese Forces party of former warlord Samir Geagea were set to score significant gains, with a projected 15 seats.

Despite the disappointing turnout among an electorate, which included around 800,000 people who were too young to vote in the previous general polls, the new electoral law allowed one candidate from a civil society list to break into parliament.

Paula Yacoubian is a prominent journalist who long hosted a show on a television channel owned by Hariri, but has cast herself as an independent.