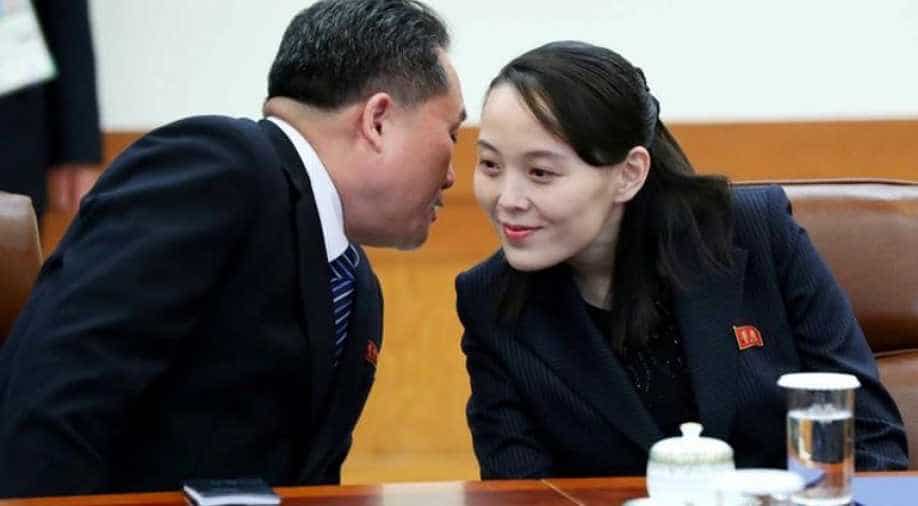 Ri Son-kwon, chairman of the Committee for the Peaceful Reunification of the Fatherland talking to Kim Yo-Jong, the sister of Kim Jong-un before their meeting at the Presidential Blue House in Seoul. Photograph:( Reuters )

On April 30, Park Sang-hak, an activist who had led a similar campaign in 2000, announced that he launched 10 advertising balloons carrying 500,000 leaflets, 500 mini booklets and nearly 5,000 $1 bills in border provinces. The act took place between Sunday and Thursday.

"We regard the manoeuvres committed by the human scum in the south as a serious provocation against our state and will look into an action corresponding to them," Kim Yo-jong warned.

"We have already seriously warned the South Korean authorities of the consequences to be entailed by their wrong act of giving a silent approval to the human scum's wild moves for North-South relations," she added.

The act took place despite a ban from South Korea against spreading anti-Pyongyang literature after North Korea had warned that it will cut all communication with South Korea if any leaflets or other literature material against Kim Jong Un or the country is circulated.

Any violation of the law is punishable by up to three years in prison or 30 million won ($27,500) in fines.