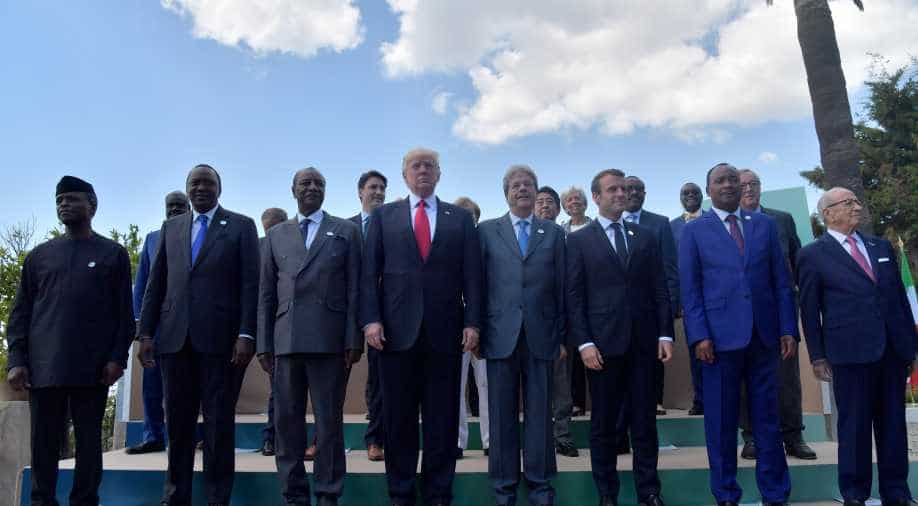 Leaders of the G7 and leaders of some African countries were invited for a two-day summit. Photograph:( AFP )

President Donald Trump said Saturday he would decide next week whether the United States would abide by the 2015 Paris agreement on cutting global carbon emissions.

His announcement came as a summit of G7 leaders in Sicily wrapped up in deadlock on the issue, with US partners voicing frustration at the president's failure to commit to the deal aimed at stemming global warming.

"I will make my final decision on the Paris Accord next week!" Trump tweeted.

The US leader, concluding his first overseas trip in office, later left for home without giving the customary close-of-summit news conference.

The meeting's final declaration reflected a stalemate between the US and the six other participating countries, who are all strongly committed to the Paris accord.

"The United States of America is in the process of reviewing its policies on climate change and on the Paris Agreement and thus is not in a position to join the consensus on these topics," it stated.

"Understanding this process, the (other participants) reaffirm their strong commitment to swiftly implement the Paris Agreement...

"In this context, we all agree on the importance of supporting developing countries."

German Chancellor Angela Merkel criticised what she called "a very difficult, not to say very unsatisfactory" discussion with Trump on the issue.

"Here we have a situation of six against one, meaning there is still no sign of whether the US will remain in the Paris accord or not," she said.

French President Emmanuel Macron struck a more positive note, saying the talks had been useful. "I think there was progress and there was a real discussion and exchange of views," he said, voicing hope that Trump would decide to keep his country within the Paris framework.

Other delegates concurred that it was "six against one" at the gathering of leading democracies spanning North America, Europe and Japan.

Under Trump, who once called climate change a "hoax" perpetrated by China and wants to boost the US coal industry, Washington has resisted intense pressure from its partners to commit to respecting the global 2015 accord on curbing carbon emissions.

But Gary Cohn, Trump's economic advisor, on Friday said the president had told his G7 colleagues that he regarded the environment as important.

"His views are evolving, he came here to learn," Cohn said. "His basis for decision ultimately will be what's best for the United States."

The United States is the world's biggest carbon emitter after China.

Trump had said he would listen to what US partners have to say at the G7 before making a decision on how to proceed.

Abandoning the Paris agreement would carry a high political cost internationally, with Europe, Canada, China and Japan all strongly committed to the deal.

It would also be fiercely opposed at home by environmental activists and by American corporations that are investing heavily in cleaner technology.

French Environment Minister Nicolas Hulot, in an interview to be published on Sunday in Le Parisien newspaper, said he found it unlikely "Trump would want to put his country in such an impasse."

"If Donald Trump decides to pull his country out of the Paris climate agreement, it would provoke a strong reaction from many American states, cities and economic players who are committed to developing renewable energy," Hulot said. "(...) It would be going tragically against the grain of history."

Greenpeace regretted the outcome but held out hope that Trump might change tack.

"Europe, Canada and Japan stood up today and made a stand, revealing again how far Trump is out of step with the rest of the world on climate change," Jennifer Morgan, Greenpeace's international executive director, said in Sicily.