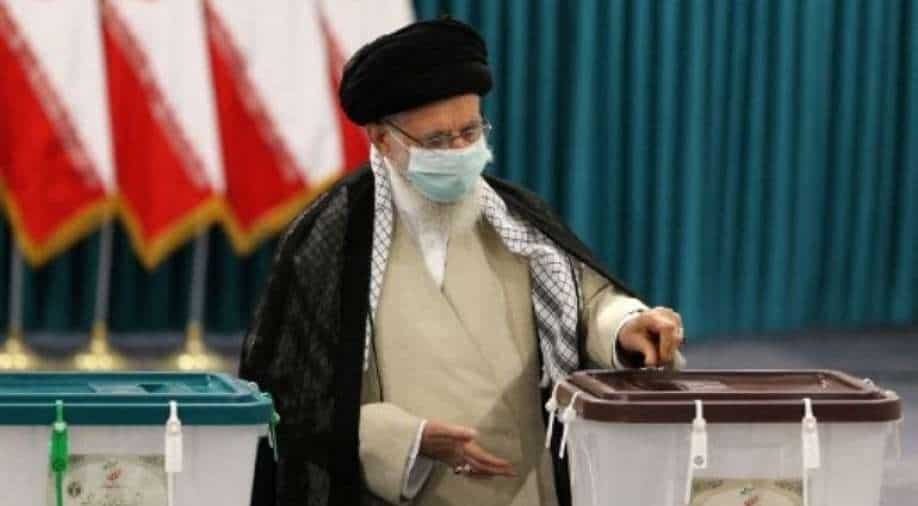 Iran's Supreme Leader Ayatollah Ali Khamenei wears a face mask as he casts his ballot on June 18, 2021, on the day of the Islamic republic's presidential election. Photograph:( AFP )

Iran's supreme leader opened a presidential election Friday in which ultraconservative cleric Ebrahim Raisi is seen as all but certain to coast to victory over his vetted rivals.

After a lacklustre campaign, turnout is expected to plummet to a new low in a country exhausted by a punishing regime of US economic sanctions that dashed hopes for a brighter future.

The supreme leader, Ayatollah Ali Khamenei, cast the first ballot in Tehran and then urged Iran's nearly 60 million eligible voters to follow suit before polls are set to close at midnight (1930 GMT).

"The sooner you perform this task and duty, the better," the 81-year-old Khamenei said. "Everything that the Iranian people do today until tonight, by going to the polls and voting, serves to build their future."

But enthusiasm has been dampened by the disqualification of many candidates and the deep economic malaise which has sparked spiralling inflation and job losses, the crisis deepened by the Covid pandemic.

"I'm not a politician, I don't know anything about politics," a Tehran car mechanic who gave his name as Nasrollah told AFP. "I have no money. All families are now facing economic problems.

"How can we vote for these people who did this to us? It's not right."

Election placards are relatively sparse in Tehran, dominated by those showing the austere face of frontrunner Raisi, the 60-year-old chief of the judiciary, in his trademark black turban and clerical robe.

Raisi has been named in Iranian media as a possible successor to Khamenei.

For the exiled Iranian opposition and rights groups, Raisi's name is indelibly associated with the mass executions of leftists in 1988, when he was deputy prosecutor of Tehran's Revolutionary Court, although he has denied involvement.

The election winner will take over in August as Iran's eighth president from incumbent Hassan Rouhani, a moderate who has served the maximum of two consecutive four-year-terms allowed under the constitution.

Ultimate political power in Iran, since its 1979 revolution toppled the US-backed monarchy, rests with the supreme leader.

But the president, as the top official of the state bureaucracy, also wields significant influence in fields from industrial policy to foreign affairs.

Rouhani's key achievement was the landmark 2015 deal with world powers under which Iran pledged to limit its nuclear programme and refrain from acquiring the atomic bomb in return for sanctions relief.

But high hopes for greater prosperity and a reopening to the world were crushed in 2018 when then-US president Donald Trump withdrew from the accord and launched an economic and diplomatic "maximum pressure" campaign against Iran.

While Iran has insisted its nuclear programme is for peaceful purposes only, Trump accused it of secretly seeking the bomb and of destabilising the wider Middle East through armed proxy groups.

As old and new US sanctions hit Iran, trade dried up and foreign companies bolted. The economy nosedived and spiralling prices fuelled repeated bouts of social unrest which were put down by security forces.

Iran's ultraconservative camp -- which deeply distrusts the United States, labelled the "Great Satan" or the "Global Arrogance" in the Islamic republic -- attacked Rouhani over the failing deal.

Despite this, there is broad agreement among all the election candidates that the country of 83 million must seek an end to the painful US sanctions in ongoing talks in Vienna aiming to revive the nuclear deal.

Out of an initial field of almost 600 hopefuls for the presidency, only seven -- all men -- were approved to run by the Guardian Council, a body of 12 clerics and jurists.

Then, two days before the election, three of the seven approved candidates dropped out of the race.

The only reformist still running is low-profile former central bank chief Abdolnaser Hemmati, who has promised to revive the economy and, unusually in Iran, heavily involved his wife in campaigning.

"For the first time since the foundation of the Islamic republic, the election of the president will take place without any real competition," wrote former French ambassador Michel Duclos in a commentary for Paris think-tank the Institut Montaigne.

Tehran blacksmith Abolfazl told AFP of his disappointment as a patriot who took part in the 1979 revolution.

"I am over 60 years old, and in my youth I revolted against the shah of Iran," he said. "I took part in a revolution to choose for myself, not so others can choose for me.

"I love my country, but I do not accept these candidates."

Iran has often pointed to voter participation for democratic legitimacy -- but polls signal the turnout may drop below the 43 percent of last year's parliamentary election.

Results are expected around noon Saturday. If no clear winner emerges, a runoff will be held a week later.