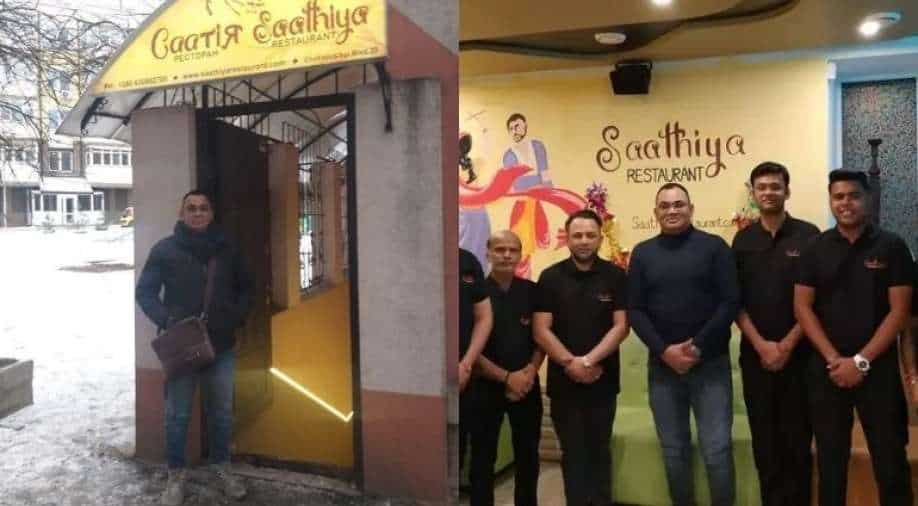 Manish Dave, an Indian restaurant owner in Ukraine's embattled capital Kyiv, stepped in as Russia's attack on the country continued.

Residents of Kyiv were strongly urged to seek shelter due to the attack. In the midst of the deadly clashes, Dave's basement eatery has transformed into a makeshift shelter. Here, dozens of children, pregnant women, students, homeless people, and older locals have gathered to seek shelter.

During a telephonic interview with the Washington Post, Dave, 52, said “I will continue to offer shelter and food for as long as I can”.

The restaurant has housed and fed more than 130 people since Russia declared war on Thursday.

David moved from Vadodara in the Indian state of Gujarat to Kyiv in October 2021 with the intention of opening an Indian restaurant. Thousands of Indian students live in the region and he wanted to give them a taste of home.

In January, he opened Saathiya Restaurant in an underground space at Bogomelets National Medical University, but disaster struck before the business could become profitable.

Dave recalled that everything was going smoothly. And then everything fell apart.

“There was fire, blasts, bombs,” he added, describing the experience as scary.

While a barrage of explosions erupted, and civilians desperately sought shelter, Dave had an epiphany: "A basement is a safe place."

“The place is so big, and I should help.”

First, he invited his regular customers - who are primarily students - to stay in his restaurant in the basement. After that, he posted an invitation to anyone in need of shelter and food on Telegram.

“If you don’t have any proper safe place to stay during this time, please go here,” he wrote, including the address of his restaurant.

Soon, strangers began arriving; Dave has been feeding shelter seekers for free. A traditional Indian dish like dal served with rice is prepared by him and his staff.

Additionally, they prepared simple pasta and other European dishes that are easy to prepare in large quantities and inexpensive to prepare. The influx of people has forced them to ration resources.

The restaurant is currently closed and will remain closed for the foreseeable future.

He refuses to accept funds from those who ate or stayed at his restaurant. As an alternative to financial assistance, Dave is asking people to purchase groceries so that he can continue taking care of those in need for as long as possible.