In his speech on the anniversary of Capitol riots, Biden deems Trump as a 'defeated former President' 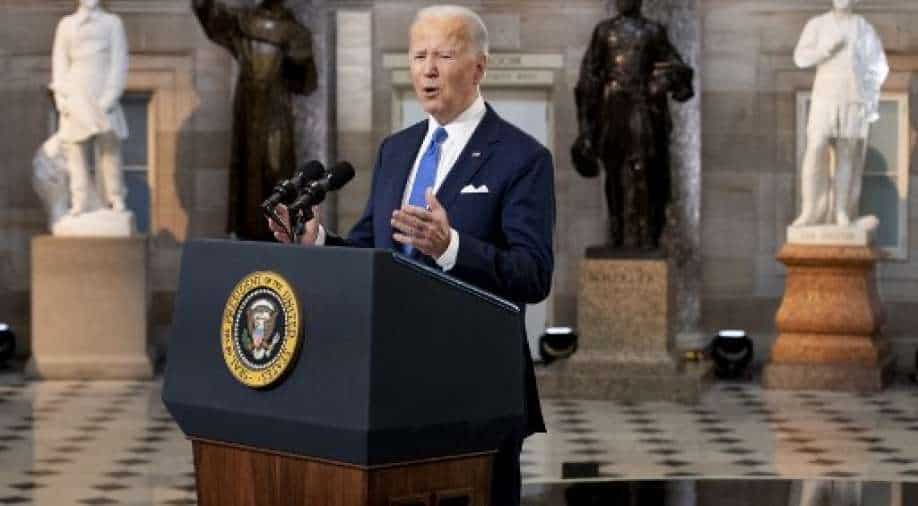 In his speech on the anniversary of Capitol riots, Biden deems Trump as a 'defeated former President' Photograph:( AFP )

Continuing his speech, Biden further said that the US and the entire world were locked in a battle between democracy and authoritarianism

On the first anniversary of the US Capitol riots, President Joe Biden made a powerful speech as he accused his predecessor Donald Trump of blocking the democratic transfer of power on January 6, 2021, as he deemed him as a "defeated former president."

"Even before the first ballot was cast, the former president was preemptively sowing doubt about the election results. He built his lie over months. It wasn’t based in any facts. He was just looking for an excuse, a pretext to cover for the truth," he said.

"Defeated by a margin of over 7 million of your votes, and a full and free and fair election. There is simply zero proof the election results were inaccurate."

Also read | One year of US Capitol Riots: Key takeaways and prominent faces of the day that divided America

On January 6, 2021, the US lawmakers were moving towards certifying Joe Biden’s victory in the election and pro-Trump protesters stormed the US Capitol to disrupt the legitimate transfer. The horrifying scene forced Congress to put a sudden pause on the ceremonial event confirming Biden's sweeping win in the elections. In the aftermath, the doors of the Senate were locked and a citywide curfew was announced.