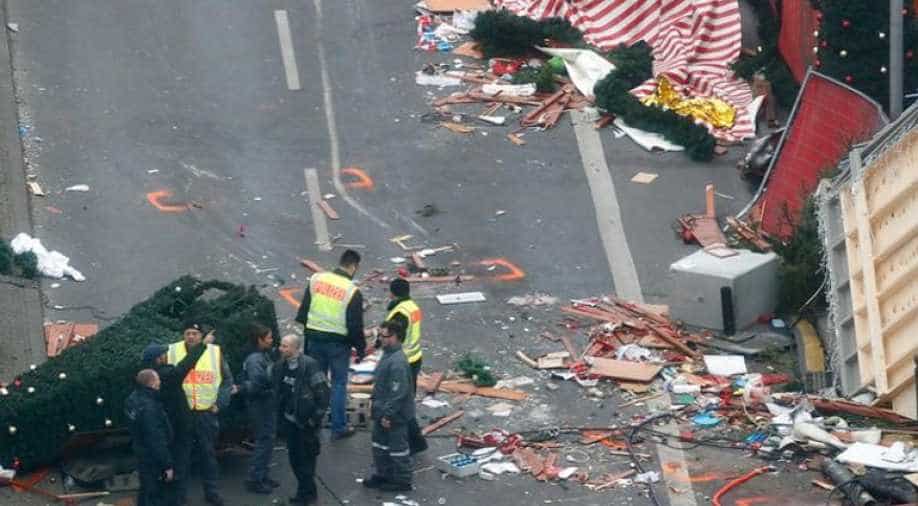 The Berlin police tweeted that 'we remain especially vigilant', urging Berliners to do the same. Photograph:( Reuters )

A Pakistani asylum-seeker suspected of ploughing a lorry into a Berlin Christmas market and killing 12 people may not be the right man, police said Tuesday, sparking fears the real killer could be on the run.

As the shellshocked German capital reeled from the country's deadliest attack of recent years, doubts emerged over whether the man detained overnight actually committed the atrocity.

Twelve people were killed and almost 50 wounded, 18 seriously, when the lorry tore through the crowd Monday, smashing wooden stalls and crushing victims, in scenes reminiscent of July's deadly attack in the French Riviera city of Nice.

"It is indeed uncertain he was the driver", Berlin police chief Klaus Kandt told reporters about the Pakistani man while forensic work and questioning continued.

Berlin police tweeted that "we remain especially vigilant", urging Berliners to do the same.

German Chancellor Angela Merkel, who was later set to visit the scene near the iconic Kaiser Wilhelm Memorial Church, said the deadly rampage was believed to be a "terrorist" attack.

Merkel said if it was confirmed that the killer had been part of the refugee influx, this would be "particularly sickening in relation to the many, many Germans who are involved every day in helping refugees".

Interior Minister Thomas de Maiziere had said the top suspect was a Pakistani man who had arrived via the so-called Balkan route last New Year's Eve and was staying at a Berlin refugee shelter.

'Bodies everywhere'
The mangled truck came to a halt with its windscreen smashed, a trail of destruction and screaming victims in its wake, with Christmas trees toppled on their side, days before the country's most important festival.

The Polish-registered vehicle, which was loaded with steel beams, had cut a bloody swathe of 60-80 metres (yards) into the popular tourist spot in the once-divided city's inner west.

A Polish man, killed with an apparent gunshot, was found on the passenger seat, said de Maiziere. He was believed to be the truck's registered driver.

The Polish owner of the lorry, Ariel Zurawski, confirmed Monday that his driver -- his 37-year-old cousin -- was missing, telling AFP: "We don't know what happened to him ... I've known him since I was a kid. I can vouch for him."

Survivors recounted harrowing stories of near misses and carnage as festive revelry turned to death and destruction in a matter of seconds.

Briton Emma Rushton was enjoying a glass of mulled wine when the Christmas scene was shattered by a loud crash and screams.

"We heard a really loud bang and saw some of the Christmas lights to our left starting to be pulled down," she told Sky news.

"Then we saw the articulated vehicle going through people and through the stalls and just pulling everything down and then everything went dark."

Local newspapers reported that after the truck driver left the cabin, a man followed him on foot and used his mobile phone to stay in touch with police, who arrested him about two kilometres (1.2 miles) away near Berlin's Victory Column.

De Maiziere said later that the Pakistani man had not appeared on any terror watch lists and had denied involvement during police questioning.

The Die Welt daily then quoted unnamed Berlin police as voicing the suspicion that "we have the wrong man".

'Free way of life'
German flags flew at half-mast on Tuesday and mourners placed flowers and candles at the site. Berlin's landmark Brandenburg Gate was to be lit in the German colours black, red and gold in honour of the victims at dusk on Tuesday.

The government declared that Christmas markets and other big events should continue because "regardless of what we may learn about the exact motives of the assailant, we must not let our free way of life to be taken from us".

Europe has been on high alert for most of 2016, with bloody jihadist attacks striking Paris and Brussels.

Germany also suffered two attacks in July in the southern state of Bavaria committed by asylum seekers and claimed by the Islamic State group.

An axe rampage by an Afghan or Pakistani man on a train wounded five people and a suicide bombing by Syrian asylum seeker left 15 people injured six days later.

The arrival of 890,000 refugees last year has polarised Germany, with critics calling the influx a serious security threat.

The attack in Berlin comes five months after Tunisian Islamist extremist Mohamed Lahouaiej Bouhlel ploughed a truck into a crowd on the Nice seafront, killing 86 people.

The United States condemned an apparent "terrorist attack", while President-elect Donald Trump blamed "Islamist terrorists" for a "slaughter" of Christians.

Russian President Vladimir Putin said that "this crime committed against peaceful civilians shocks with its brutality and cynicism".