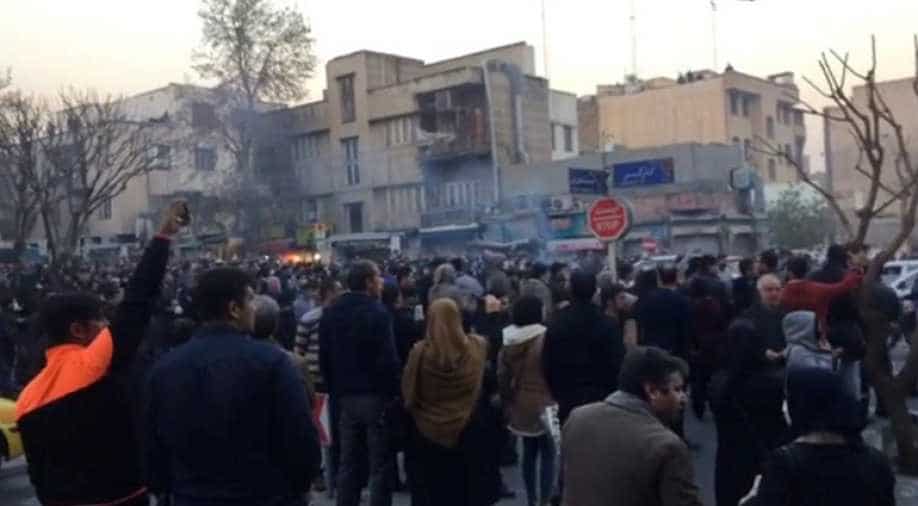 Fresh protests broke out as night fell in Iran Monday with reports of a policeman shot dead, as the authorities moved to crack down on days of unrest across the country.

There was a heavy police presence in Tehran as small groups of protesters ran through the city centre shouting anti-regime slogans, local agencies reported.

Some arrests were made before calm returned to the capital, reports said.

State television said one policeman had been killed and three others wounded by fire from hunting rifles in the city of Najafabad in central Iran.

The latest demonstrations came despite President Hassan Rouhani's vow that the nation would deal with "rioters and lawbreakers".

"Hashtags and messages about the situation in Iran come from the United States, Britain and Saudi Arabia," he said.

"What is happening on social networks concerning the situation in the country is a proxy war against the Iranian people."

US President Donald Trump, who has repeatedly criticised Tehran over four days of demonstrations, said it was "time for a change" and that Iran's people were "hungry" for freedom.

Iran's intelligence ministry released a statement saying "rioters and instigators" have been identified "and will be dealt with seriously soon".

The Revolutionary Guards published photos of three wanted people and called on the public to report any "seditionist elements".

The deadliest night yet was on Sunday, with state television reporting six people killed by gunfire in the western town of Tuyserkan, and a local lawmaker saying two people had been shot dead in the southwestern town of Izeh.

Two others, including a teenage boy, were run down and killed by a fire engine protesters stole in the western town of Dorud, the state broadcaster said.

The total death toll linked to the protests currently stands at 13.

Biggest test for regime
Rouhani tried to play down the unrest, which began in second city Mashhad last Thursday and quickly spread across the country to become the biggest test for the regime since mass protests in 2009.

"This is nothing," Rouhani said in a statement on the presidency website.

"Our nation will deal with this minority who chant slogans against the law and people's wishes, and insult the sanctities and values of the revolution."

Pro-regime rallies were held across several towns and cities.

Reporting restrictions remained tight, but videos on social media showed seemingly widespread anti-government protests, with attacks on government buildings and a school for clergy in the northwestern town of Takestan on Sunday.

'Scared of talking'
Tehran has seen relatively small protests, but many people sympathise with economic grievances driving the unrest.

"Life is really difficult. The high prices really put me under pressure. My husband is a government worker but his salary is no way enough for us to make ends meet," said Farzaneh Mirzaie, 42, a mother of two.

"Mr Rouhani says it's free for people to protest but we're scared of speaking. Even now, I'm scared of talking to you," added Sarita Mohammadi, a 35-year-old teacher.

The authorities have confirmed more than 400 arrests since the outbreak of the unrest, of whom around 100 have been freed.

"Those who have rightful demands must be guided in lawful ways and those who riot and commit sabotage and chaos and set fire to public property... must be confronted decisively," judiciary chief Ayatollah Sadegh Larijani told the state broadcaster.

"The country must have discipline," he added.

Trump, a fierce critic of Tehran, used one of his first tweets of 2018 to again lash out.

"The great Iranian people have been repressed for many years. They are hungry for food & for freedom. Along with human rights, the wealth of Iran is being looted. TIME FOR CHANGE!" he tweeted.

"We believe that there should be meaningful debate about the legitimate and important issues the protesters are raising and we look to the Iranian authorities to permit this," Johnson said in a statement.

Living costs, unemployment
After initial silence, state media have shown some footage of demonstrations, focusing on young men attacking banks and vehicles, an attack on a town hall in Tehran and images of a man burning the Iranian flag.

Rouhani came to power in 2013 promising to mend the economy and ease social tensions, but high living costs and a 12 percent unemployment rate have left many feeling that progress is too slow.

"We have no problem bigger than unemployment. Our economy needs an operation. We must all stand together," Rouhani acknowledged on Monday.

In 2009, authorities ruthlessly put down protests which followed a disputed presidential election that gave hardliner Mahmoud Ahmadinejad a second term. At least 36 people were killed in 2009, according to an official toll, while the opposition says 72 died.