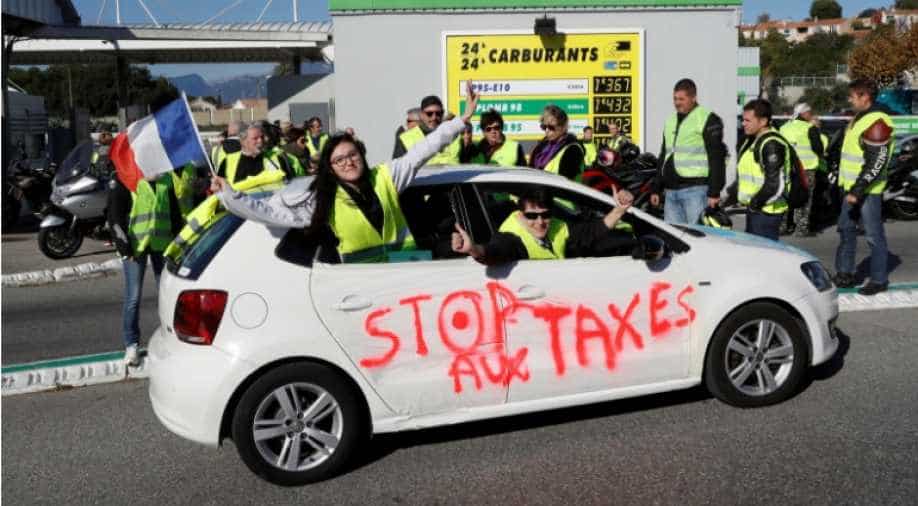 The injured, 409 in total, included 28 police, paramilitary police or firefighters.

Fresh clashes in the "yellow vest" fuel price protests across France led to more injuries on Sunday, adding to the more than 400 already reported by the government, as some demonstrators vowed to continue their action over the coming days.

Around 46,000 people took part across France in the second day of protests, police said, compared to Saturday when close to 300,000 people participated, although there were again clashes with police -- and sometimes motorists.

Police were searching for a driver who forced a roadblock at Saint-Quentin, northeast France, leaving one protester seriously injured.

And police used tear gas to break up a gathering of about a thousand protesters near the northern city of Caen, after acts of vandalism and the burning of wooden pallets.

The protesters, nicknamed "yellow vests" for the high-visibility jackets they wear, blocked roundabouts, major highways and thoroughfares on Saturday to express anger over increased taxes on fuel and their shrinking purchasing power under President Emmanuel Macron.

French Prime Minister Edouard Philippe on Sunday evening said the government would stay the course, but acknowledged the "suffering" expressed by the protests.

"A government that always changes its stance, zigzagging through difficulties... would not lead France in the right direction," he told France 2 television.

"We heard anger but also heard suffering, the lack of prospects, the idea that the authorities for a long time did not respond to the concerns and feeling of abandonment felt by part of the population," he said.

Interior Minister Christophe Castaner earlier reported that the first day and night of protests had left one person dead and more than 400 people hurt, 14 of them seriously.

The injured, 409 in total, included 28 police, paramilitary police or firefighters.

Castaner told RTL radio that 288,000 people had taken part in Saturday's protests at 2,034 locations countrywide. About 3,500 stayed out overnight, he added.

Police questioned nearly 300 protesters, and took about half of them into custody.

"There were fights among 'yellow vest' protesters. There was a lot of alcohol at certain venues, which led to this idiotic behaviour."

In the eastern Savoie region, authorities said a woman trying to get her daughter to a doctor panicked after protesters surrounded her car and banged on the roof.

She accelerated into the crowd and killed a 63-year-old woman.

The driver was on Sunday charged with manslaughter before being released on conditional bail, prosecutors said.

Budget Minister Gerald Darmanin said Sunday the government was aware of unhappiness over high fuel taxes, but said it had "a duty" to transform the French economy with the aim of making it less oil-dependent.

A poll published in the Journal de Dimanche weekly said that 62 per cent of those questioned believed their purchasing power was more important than a fast transition towards renewable energy.

In several spots across the country protesters vowed to carry on their action on Monday and beyond.

A spokesman for the movement in the western region of Morbihan said "tomorrow we will be joined by lorry drivers", while in the city of Le Mans, southwest of Paris, protesters said that farmers would help them block a major motorway, the A28 leading up to the Picardy coast.

"There are many young people among us because we can't make ends meet anymore," said Emilie, a 27-year old temporary sales manager in Cavaillon in the south of the country.

"We work like slaves and at some point enough is enough. We have no life, we're just surviving," she said.

Analysts say the movement has come to represent more widespread frustration against Macron, a former investment banker who has pushed through a series of reforms aimed at bolstering economic growth.

Another poll also published in the Journal du Dimanche indicated that Macron's popularity had dipped a further four points to 25 per cent.

The survey was conducted November 9-17 with 1,957 respondents.