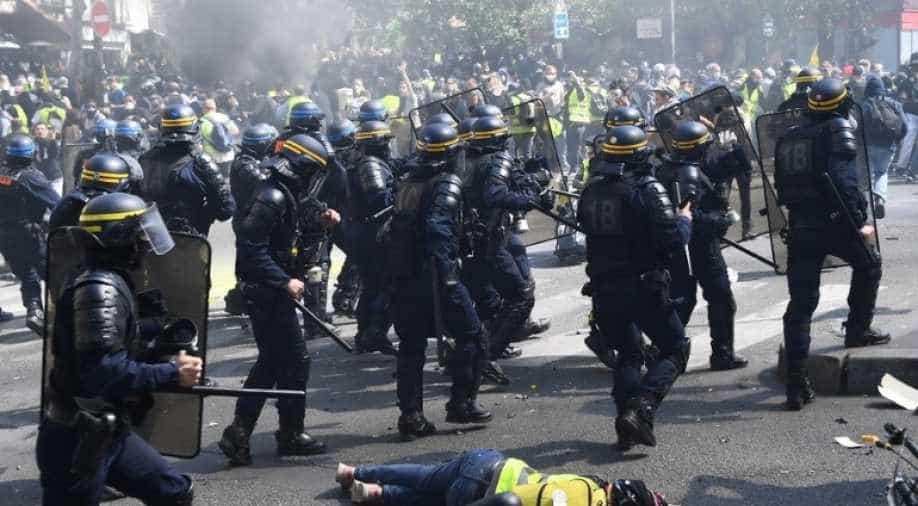 A yellow vest protester lies on the ground during clashes with police in Paris. Photograph:( AFP )

French police on Saturday said that they have arrested over 100 ''yellow vest'' protestors in Paris after thousands of demonstrators took to streets for the 23rd week of anti-government marches.

The Police headquarters reported 126 arrests and 11,000 checks on individual protestors.

Clashes broke out during the protests where demonstrators threw rocks at the police and some set fire to motorcycles in the centre of the French capital.

In response, the police used anti-riot grenades and tear gas to disperse the crowd.

The city was on high alert after Christophe Castaner, the interior minister, said domestic intelligence services had informed him of a potential return of rioters intent on wreaking havoc in Paris, Toulouse, Montpellier and Bordeaux, in a repeat of violent protests on March 16.

Meanwhile, French President Emmanuel Macron will hold a press conference on Thursday next week and will make an announcement in response to ''yellow vest'' protests.

The press conference is due to take place on Thursday next week at 6:00 pm (local time). It will start with a speech followed by questions from journalists.