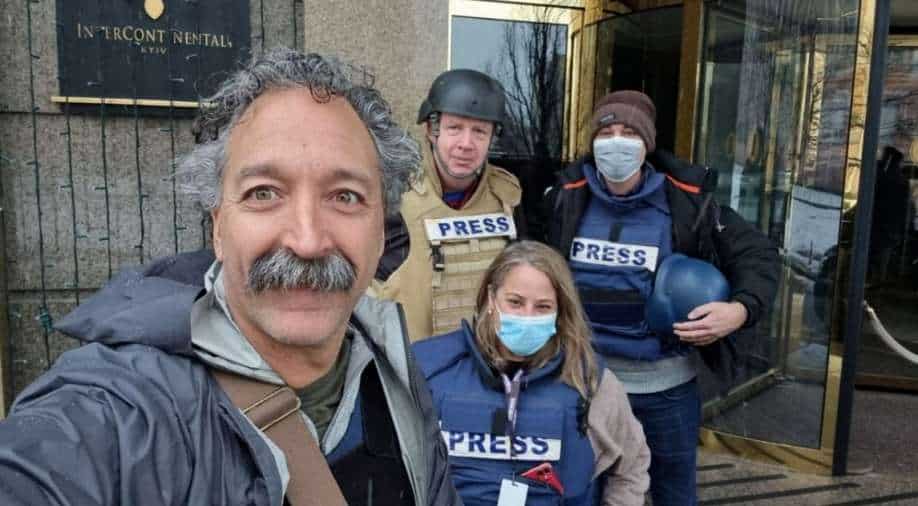 Fox News cameraman Pierre Zakrzewski, who was killed in Ukraine after the vehicle in which he was traveling was struck by incoming fire, poses for a selfie with colleagues Steve Harrigan, Yonat Frilling and Ibrahim Hazboun in Kyiv, Ukraine in an undated photograph. Photograph:( Reuters )

Zakrzewski was a veteran war-zone photographer who had covered multiple conflicts, including in Iraq, Afghanistan and Syria

The Russia and Ukraine conflict continues to escalate with reports of massive loss of life and property in the Ukrainian cities that are being shelled by the Russian forces.

Latest reports state that a French-Irish cameraman for US-based Fox News and a Ukrainian working as a producer for the US television network have been killed near Kyiv.

The media outlet informed on Tuesday (March 15) that cameraperson Pierre Zakrzewski and producer Oleksandra Kuvshynova died during the conflict.

Zakrzewski was a veteran war-zone photographer who had covered multiple conflicts, including in Iraq, Afghanistan and Syria.

Benjamin Hall, another correspondent for the news outlet was also wounded when their vehicle was struck Monday by incoming fire in Horenka, outside the capital.

Fox News Media CEO Suzanne Scott said that Hall, who is a Briton and works as the network's State Department correspondent, is currently in hospital in war-torn Ukraine.

Mentioning Zakrzewski, Scott said, "Pierre was a war zone photographer who covered nearly every international story for Fox News from Iraq to Afghanistan to Syria during his long tenure with us."

The 55-year-old Zakrzewski was based in London and he had been working in Ukraine since February. He had dual French and Irish citizenship.

"He was a warm-hearted traveler who provoked beautiful encounters, he was very humble and human and had not lost any of his sensitivity over the years," a member of his family told news agency AFP.

The family member further said that last week Zakrzewski "had helped to shelter a newborn baby found after a bombing, named Prince Charlie".

"His passion and talent as a journalist were unmatched." He is survived by his wife Michelle, a documentary filmmaker and producer, his family member said.

Irish Prime Minister Micheal Martin said he was "deeply disturbed and saddened" by the deaths of Zakrzewski and his colleague.

"My thoughts are with their families, friends and fellow journalists," Martin said on Twitter. "We condemn this indiscriminate and immoral war by Russia on Ukraine."

At least four journalists have died in nearly three weeks of fighting. American filmmaker and journalist Brent Renaud was shot dead by Russian forces in the town of Irpin in Ukraine's Kyiv region, a regional police chief said on Sunday.