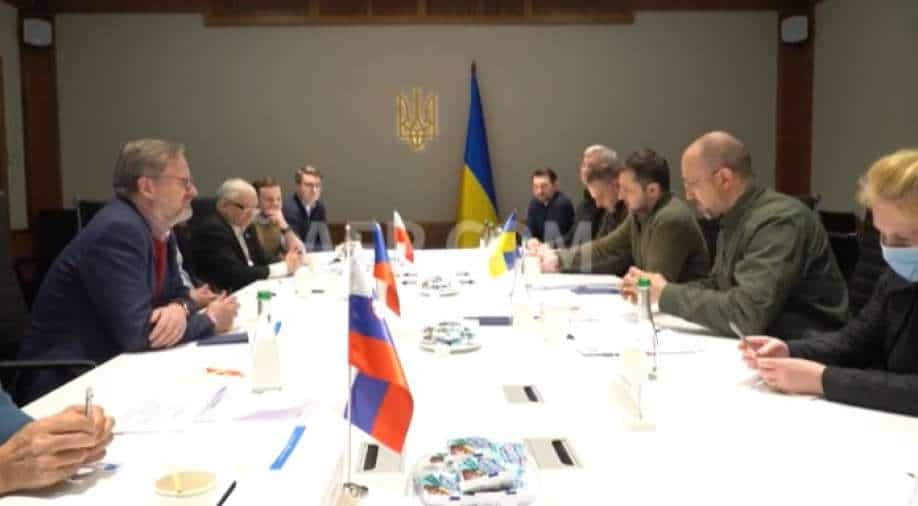 The visit comes as Russian forces attack targets across Ukraine, including Kyiv, which has nearly been encircled by Moscow's forces, and as negotiations to end the nearly three-week war are scheduled to resume

In the first foreign leaders' visit to Ukraine's besieged capital since Russia's invasion, the prime ministers of Poland, the Czech Republic, and Slovenia met with Ukrainian President Volodymyr Zelensky on Tuesday.

Upon arrival by train, the prime ministers sat around a table with their Ukrainian counterpart Denis Shmyhal and the Ukrainian president, who provided an overview of the situation.

"They are shelling everywhere. Not only Kyiv but also the western areas," Zelensky told them in comments translated into English, a video posted on his Telegram account showed.

"We have to halt this tragedy unfolding in the East as quickly as possible," Polish Prime Minister Mateusz Morawiecki said in a post on Facebook announcing their arrival.

Ukraine had the "unequivocal support" of the European Union, he added.

Shmyhal announced their arrival earlier that day on Twitter, saluting "the courage of true friends of Ukraine."

The Prime Ministers of 🇵🇱 @MorawieckiM, 🇸🇮 @JJansaSDS and 🇨🇿 @P_Fiala arrived on the behalf of @EUCouncil to #Kyiv today. The courage of true friends of 🇺🇦! Discussing support of #Ukraine and strengthening sanctions against the Russian aggression.

He said their talks would focus on support for Ukraine and "strengthening sanctions against the Russian aggression".

Also read | 'We don't know how to kill': Residents of Odessa who cannot fight help with war efforts in other ways

Prime Minister Morawiecki, Czech Premier Petr Fiala and Slovenian Prime Minister Janez Jansa are on a visit to the besieged country as "representatives" of the European Union, according to an early statement from the Polish government.

The visit comes as Russian forces attack targets across Ukraine, including Kyiv, which has nearly been encircled by Moscow's forces, and as negotiations to end the nearly three-week war are scheduled to resume.

"In such crucial times for the world, it is our duty to be in the place where history is being made," Morawiecki said in a Facebook post earlier Tuesday.

"Because this is not about us, it is about the future of our children who deserve to live in a world free from tyranny," he said.

Watch | Ukraine | Refugees of war: What do the numbers say

According to the government statement, the visit was organised "in agreement" with European Council chief Charles Michel and European Commission president Ursula von der Leyen.

"The purpose of the visit is to confirm the unequivocal support of the entire European Union for the sovereignty and independence of Ukraine and to present a broad package of support for the Ukrainian state and society," the statement said.