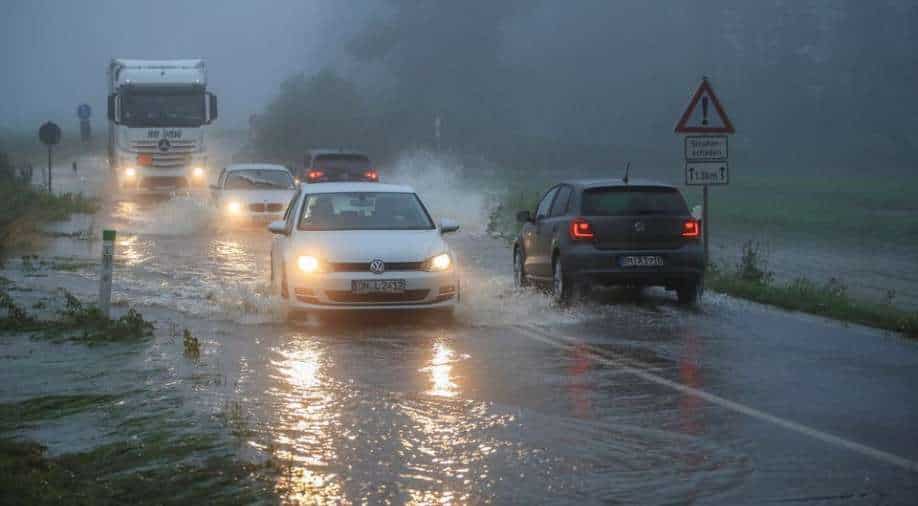 Roads flooded in Erftstadt in Germany on Wednesday, as heavy rainfall continues to affect western parts of the country. Photograph:( Reuters )

The properties collapsed in the German state of Rhineland-Palatinate and around 25 more houses are at risk.

Heavy rains and floods in western Germany have killed four people and left approximately 50 others missing, according to the local authorities.

"A lot of the people" reported missing were on the roofs of houses that were swept away by floods in the municipality of Schuld, a police spokesman in the city of Koblenz said. Schuld is in a region of the state of North Rhine-Westphalia worst hit by the storms which have caused rivers to burst their banks.

According to police, the houses that collapsed are in the German state of Rhineland-Palatinate.

Around 25 more houses are in danger of collapsing in the district of Schuld bei Adenau in the hilly Eiffel region.

The situation in the Eifelkreis Bitburg-Prum rural district has been described as "very dangerous."

Several people have been stranded on rooftops as a result of the once-in-a-generation floods.

"We currently have an unclear number of people on roofs who need to be rescued," a spokesperson for the Koblenz police said.

"There are many places where fire brigades and rescue workers have been deployed. We do not yet have a very precise picture because rescue measures are continuing," the spokesperson added.

Heavy rainstorms are forecast in southwestern Germany on Thursday, with rain continuing until Friday evening, according to a morning advisory from the German Weather Service.