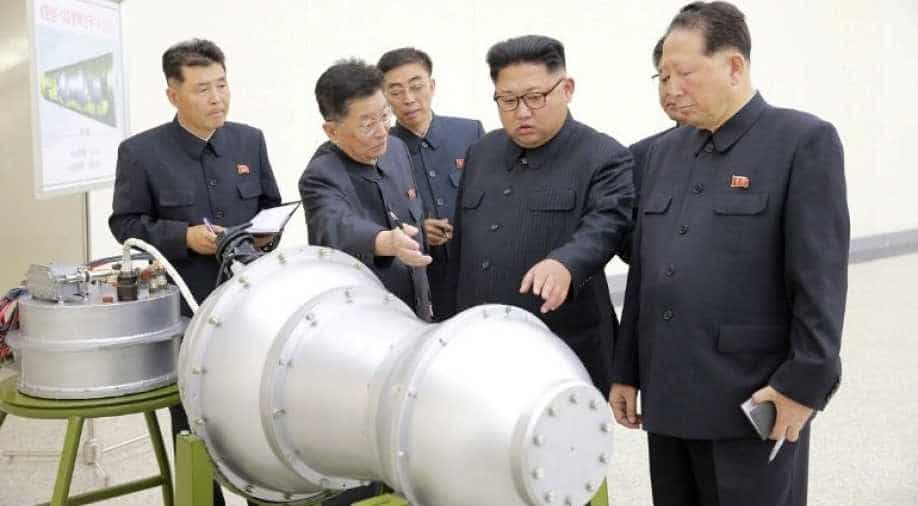 North Korea often seems more focused on making a splash with new weapons rather than pragmatically building more of the weapons it already has, said missile expert Markus Schiller.

If North Korea returns to long-range missile launches or other weapons tests in 2020, its military could make valuable technical advances and gain experience alongside whatever political message is sent to Washington.

This week North Korean leader Kim Jong Un said that the world would soon see his country's "new strategic weapon" and that there was no longer reason for Pyongyang to be bound by a self-imposed moratorium on nuclear and intercontinental ballistic missile (ICBM) tests.

Kim's comments were the strongest indication that the North could resume some of the major tests it had suspended more than two years ago in the run-up to summit diplomacy with the United States.

After years of development, the weapons programmes of North Korea are now advanced enough that it is hard to predict what it might test, said Jeffrey Lewis, a researcher at the James Martin Center for Nonproliferation Studies (CNS).

US military officials have said they see a long-range missile launch as one of the most likely possibilities.

"Any tests or drills they run will not only allow them to develop weapons that are faster, longer-range, or more reliable, but they also give the people operating these systems more exposure to and practice using and deploying the weapons," said Grace Liu, a research associate at CNS.

In December, North Korea said it had carried out two important tests at its Sohae satellite launch site, aimed at developing "another strategic weapon" to counter nuclear threats from the United States.

Although North Korean state media did not say exactly what was tested or what the new weapon might be, officials in Washington and Seoul said it appeared likely the North had tested rocket engines, possibly for ICBMs.

"They might work toward developing better liquid-propellant engines or revisit older engines that they've had trouble with in the past," said Ankit Panda, a senior fellow at the US-based Federation of American Scientists (FAS).

Analysts also speculated that North Korea could be developing better solid rocket motors (SRMs), which can offer some benefits like easier storage and transportation.

SRMs would also be important for North Korea's efforts to field an operational submarine-launched ballistic missile (SLBM), similar to what was test-fired from a submerged barge in October.

"Every missile they've flight-tested in 2019 to date has used a solid rocket motor and they're clearly becoming more adept at casting these motors in different diameters," Panda said. "There are challenges associated with moving to ICBM-sized SRMs, but perhaps North Korea will demonstrate a breakthrough on that front."

A warhead launched by an ICBM needs a protective reentry vehicle to help it survive the fiery descent through the atmosphere to hit its target.

After the November 2017 launch of its largest ICBM to date, the Hwasong-15, state media said the test confirmed "the safety of a warhead in the atmospheric re-entry environment."

US military officials later said North Korea had not demonstrated a survivable re-entry vehicle, though they did not discount the possibility.

During North Korea's last ICBM tests in 2017, its scientists may have gleaned useful data on how their reentry vehicles worked, Panda said.

However, the tests were conducted on a "lofted trajectory" high into space, potentially limiting the usefulness of some of the data, as the missile would take a much different trajectory during a war, he added.

A final card North Korea could play is an atmospheric test of a nuclear warhead, though many analysts say that is unlikely, as it could anger Pyongyang's backers in Beijing and Moscow.

But North Korea is believed to have continued producing material for nuclear weapons, and analysts said it is likely to continue stockpiling additional warheads while seeking to make them even smaller.

In 2019, North Korea conducted several tests of new short-range missiles such as the KN-23, which experts said are designed to better evade missile defences.

This year, North Korea could seek to develop multiple reentry vehicles for large-diameter missiles like the Hwasong-15, Panda said.

"Adding more nuclear warheads to a single missile can better assure them of an ability to penetrate American missile defence and, if they're worried that their warheads might have reliability issues, more warheads increase the odds that one warhead will successfully detonate," he said.

North Korea often seems more focused on making a splash with new weapons rather than pragmatically building more of the weapons it already has, said Markus Schiller, a missile expert based in Europe who focuses on the way North Korea has used outside help for its technology.

"This new stuff will again be something they have procured from somewhere else or some publicity event that our political scientists will interpret as a huge leap toward new technology," he said.

Schiller said one technology that could generate the buzz North Korea is looking for could be a hypersonic glide vehicle (HGV), which the Missile Defense Advocacy Alliance defines as weapons that travel faster than Mach 5 (3,800mph/6,174kmh) and have the capability to manoeuvre during the entire flight.

"Perhaps they will display a design model of an HGV, or launch a KN-23 on top of a bigger missile and have it do some manoeuvring at reentry while claiming to have launched an HGV," Schiller said. "This way, they can save their limited resources, and play the same game they had over the past years."