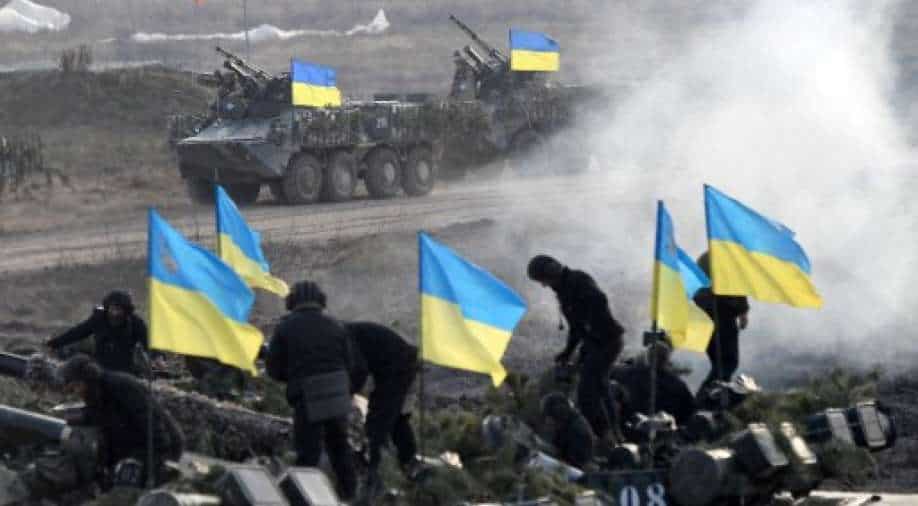 Ukrainian servicemen standing on their tanks during a drill of the airborne troops  Photograph:( AFP )

The eight-point draft treat is Putin's "red line" to the West amid tensions with over Ukraine. It covers several contentious points.

Russia submitted a draft document on legal security guarantees to the Biden administration to "ensure the security of the Russian Federation and member states of the North Atlantic Treaty Organisation (NATO)."

The Russian foreign ministry said it "provided detailed explanations regarding the logic of the Russian approach."

The eight-point draft treat is Putin's "red line" to the West amid tensions with over Ukraine. It covers several contentious points. Here is a closer look.

Draft treaty between US and Russian Federation on security guarantees:

Article 4 of the draft says, "United States of America shall undertake to prevent further eastward expansion of North Atlantic Treaty Organization(NATO) and deny accession to the alliance to the states of the former Union of Soviet Socialist Republics."

This has been Putin's key demand ever since tensions escalated with Ukraine over the border.

"The United States of America shall not establish military bases in the territory of the states of the former Union of Soviet Socialist Republics," it said, adding, "use their infrastructure for any military activities or develop bilateral military cooperation with them."

Further, Article 5 states "parties shall refrain from deploying their armed forces and armaments in the areas where such deployment could be perceived as a threat."

Russia also does not want the US to deploy "heavy bombers" equipped with nuclear or non-nuclear armaments or deploy surface warships.

Article 6 states both "parties shall undertake not to deploy ground-launched intermediate-range and shorter-range missiles outside their national territories."

It also states that both parties "shall not train military and civilian personnel from non-nuclear countries to use nuclear weapons." It also seeks to bar military exercises and training including "scenarios involving the use of nuclear weapons."

What does the US want?

White House Press Secretary Jen Psaki said, "There will be no talks on European security without our European allies and partners" indicating Ukraine and other NATO partners would be consulted before an official reaction can be put out.

Psaki said there can be no compromises on the principles of European security even as the Russian foreign ministry said it is ready to hold talks.

Psaki asserted that the US has been engaging with Russia for decades however the Biden administration has to adhere to its partnership with European allies.