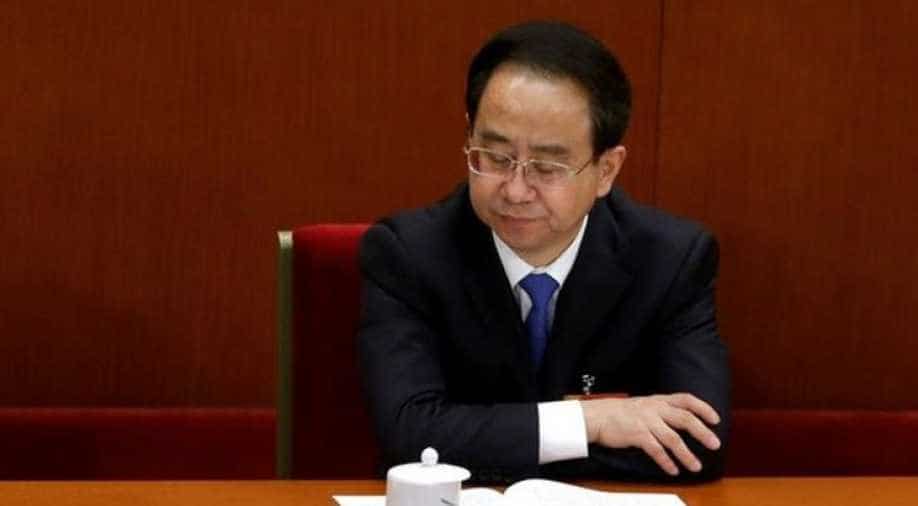 Follow Us
An ex-aide of former Chinese President Hu Jintao has been jailed for life for corruption, illegally obtaining state secrets and abuse of power, official media reported Monday.

Ling Jihua pleaded guilty and said he would not appeal, Xinhua news agency said, citing the verdict of the First Intermediate People's Court in Tianjin, which held his trial in secret last month.

Verdict and sentence come as part of a high-profile crackdown

The verdict and sentence come as part of a high-profile crackdown on graft by current President Xi Jinping that has deposed several senior officials, notably former security chief Zhou Yongkang, who was himself jailed for life last year.

Critics, however, say that a lack of transparency around the crackdown means it has been an opportunity for Xi to eliminate political enemies.

"The trial today is engraved on my bones and in my heart," it quoted Ling as saying in his final statement to the court.

The chief judge carried out his duties "fairly and lawfully", he added, and the proceedings were "solemn, meticulous, rational and civilised".

It may be noted Chinese courts are controlled by the ruling Communist party, which expelled Ling -- once Hu's chief of staff -- from its ranks last year.

Further, it may also be pertinent to mention Ling's son died in a notorious Ferrari crash in Beijing which disrupted the once-in-a-decade party leadership change when Xi took over from Hu in 2012.

Ling had powerbases in the northern province of Shanxi and the Communist Youth League -- seen as a proving ground for politicians who, unlike Xi, do not benefit from family links to high-ranking revolutionaries.

One of his brothers, Ling Zhengce, a senior official in Shanxi, was put under investigation in 2014 for serious violations of "discipline and the law" -- a euphemism for corruption -- and expelled from the party last year.

Another brother, Ling Wancheng, has fled to the United States, a Chinese anti-graft official confirmed in January, adding Beijing was "in touch" with Washington about his case.

His exile has led to speculation in overseas Chinese media that Ling Jihua had given him top state secrets, including the launch codes for China's nuclear weapons, to secure some leverage in negotiations with Beijing over his case.

'It was a relatively lenient sentence'

Under Chinese law, the death penalty is available for corruption cases, but Xinhua said Ling was given a reduced sentence for having "faithfully" confessed to his crimes and being penitent for his actions.

It was "a relatively lenient sentence", Willy Lam of the Chinese University of Hong Kong told AFP. "It's possible Ling drove a bargain with authorities."

His former boss Hu was probably safe, Lam added, saying that the former president "made a wise decision by refusing to support Ling".

But other Hu proteges "may now be blocked from promotion", he said, as Xi consolidates his power over the government.

The Ferrari crash scandalised China despite a mainland media blackout -- partly because two young women, one nude and one partially clothed, were also injured in the crash, with one reportedly dying months later.

Internet users questioned how the son of a party official could afford a car worth a reported five million yuan.

The politician, his wife and son received bribes worth a total of 77.1 million yuan ($11.6 million), Xinhua said.

The court found that the bribes Ling took were "exceptionally enormous" and "the criminal circumstances" under which he obtained state secrets were severe, said the report.

His abuse of power caused "huge losses to public property and the interests of the state and the people" and had "especially vile social impact", it said.

When Ling was charged the country's national prosecuting authority said he "abused his power" as director of the General Office of the Communist Party's Central Committee, where he worked under Hu.

Graft is endemic in China's authoritarian system, and Xi has acknowledged it as a threat to the ruling party's survival.