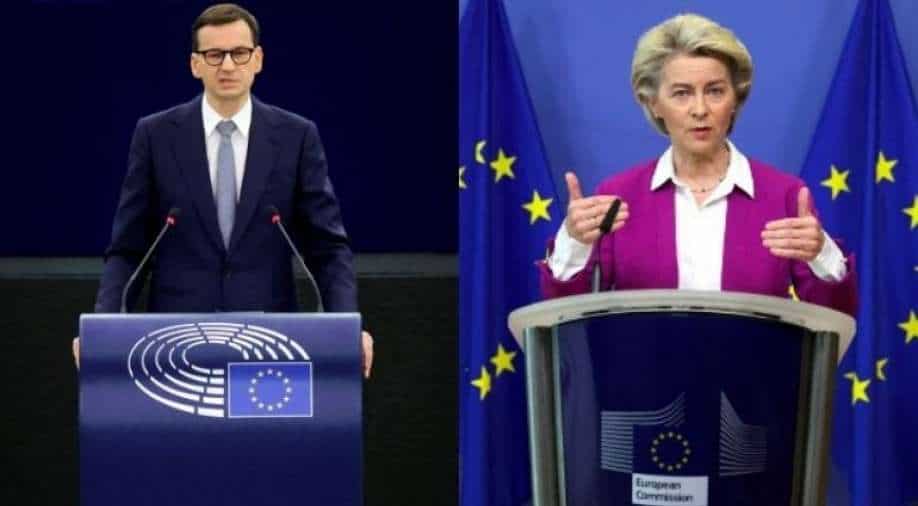 This dispute, which took place in the European Parliament, emphasized the severity of the topic, which both Brussels and Warsaw claim threatens the cohesion of the 27-nation bloc

Polish Prime Minister Mateusz Morawiecki accused the EU of "blackmail" during a public clash with the EU chief over Poland's rejection of parts of EU law.

Speaking during a public confrontation with European Commission chief Ursula von der Leyen, Morawiecki said that "it is unacceptable to talk about financial penalties... I will not have EU politicians blackmail Poland."

In her remarks, Von der Leyen warned that her Commission, which is tasked as the guardian of EU treaties, would "act" to rein Poland in.

Enumerating the legal, financial, and political options being considered, she said, "We cannot and we will not allow our common values to be put at risk."

A Polish Constitutional Court ruling on October 7 had raised questions about parts of EU law, igniting long-simmering tensions between Poland and Brussels.

This dispute, which took place in the European Parliament, emphasized the severity of the topic, which both Brussels and Warsaw claim threatens the cohesion of the 27-nation bloc.

Analysts said the partial rejection of EU supremacy could be the first step in Poland's eventual departure from the European Union.

Morawiecki maintained, however, that Poland's place was in the European Union, with EU law derived from the EU's treaties only applicable in specified areas and Poland's national constitution supreme in all other areas.

What can the EU do?

Withholding recovery cash from a pooled EU fund that was established for the bloc to recover from the impact of the Coronavirus pandemic could be one of the measures the Commission uses against Poland.

In a letter released on Monday, Morawiecki described this as "financial blackmail, punishment, 'starving' of unsubordinated states".

For its part, Poland can play a spoiler in a number of key EU policy areas that require unanimity among the 27 member states, including its position on climate change and migration. It also has the support of Hungary, another bete noire for Brussels, seen to be flouting the rule of law.

On Thursday and Friday, EU leaders will meet in Brussels. With the Netherlands and Luxembourg particularly critical of Warsaw, Poland could rise to the top of its agenda.

The European Commission and Parliament have taken Warsaw to task, for moves to scrap judges' independence and other policies that are seen as regressive to democratic norms.

Additionally, they have sharply criticized Poland's extreme social policies, including restrictions on LGBTQ rights and a near-total ban on abortions pushed by the ruling Law and Justice (PiS) party.