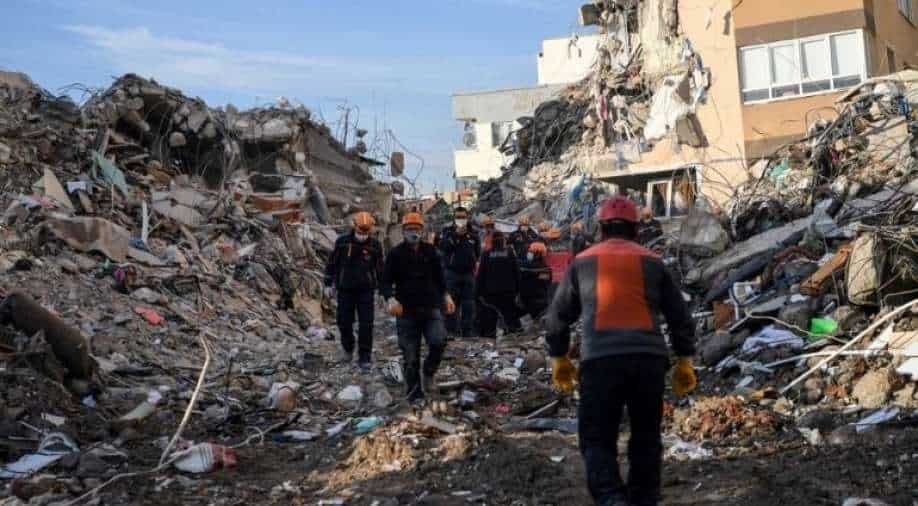 Rescue personnel search through the rubble of buildings at Bayrakli district in Izmir on November 3, 2020, as they look for survivors after a 7.0-magnitude earthquake struck Turkey and Greece on October 29 Photograph:( AFP )

An earthquake of magnitude 6.2 struck Greece on Wednesday, the European Mediterranean Seismological Centre (EMSC) said, having earlier reported magnitudes of 6.9 and 5.9 for the tremblor.

The fire department said that according to the first reports, a home and a school had been damaged. Police also sealed off a bridge cracked by the quake.

The Civil Protection agency also reported that landslides occurred in the region, and authorities were assessing further damage.

"Everything happened very fast, people ran out of buildings, there are still aftershocks," Chrissoula Katsiouli, a staffer at the mayor's office in the local town of Elassona said.

"Fortunately, the teachers managed to get the children out very quickly and there were no victims," the mayor of Tyrnavos Yiannis Kokkouras told Skai TV.

According to the Athens observatory, the epicentre of the quake was 21 kilometres (13 miles) south of the town of Elassona, near Larissa and was eight kilometres deep.

There were at least three aftershocks following the main tremor -- including one at magnitude 4.0 -- and authorities warned there could be more.

However, experts stress that quake faults in the area rarely produce tremors larger than the one clocked on Wednesday.

The last major earthquake in the area was in the 18th century and was magnitude 6.2, Manolis Skordilis, a seismologist at Thessaloniki's Aristotle University, told state agency ANA.

Greece is located on a number of fault lines, and is sporadically hit by earthquakes.

But the quakes often happen at sea and do not often kill people or cause extensive damage.

The last fatal earthquake was in October, when a magnitude 7.0 hit in the Aegean Sea between the Greek island of Samos and the city of Izmir in western Turkey.

The majority of damage from that temblor was in Turkey, where 114 people were killed and more than 1,000 injured. In Greece, two teenagers were reported dead on the island of Samos.