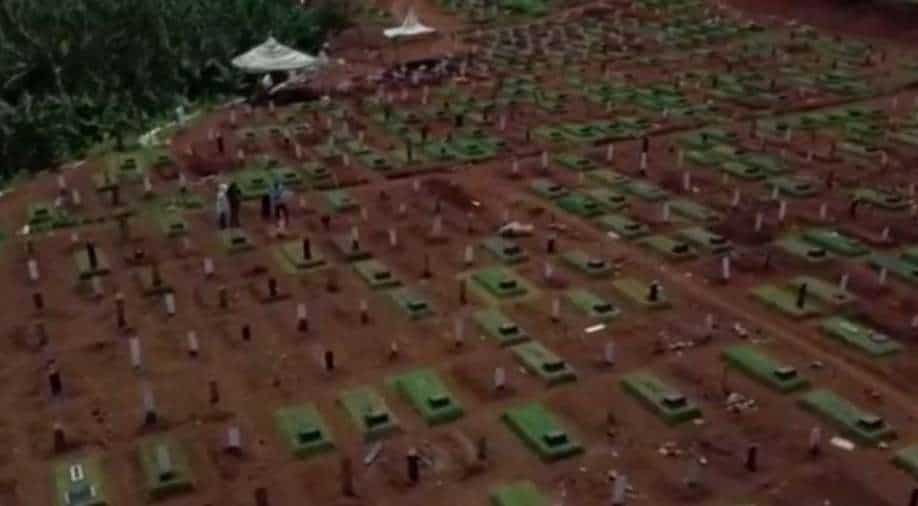 Indonesia is among the worst-hit south-east Asian countries with the virus with reportedly the world's lowest testing rates.

Amid rising cases of coronavirus cases in the country, drone footage of the Indonesian capital Jakarta has shown burial grounds have been rapidly expanding as fatalities increase due to the virus.

The country has also been plunged into a recession due to the coronavirus crisis with the economy slumping 3.49 per cent on-year in July-September which is the worst since the Asian financial crisis over 20 years ago.

Indonesia is among the worst-hit south-east Asian countries with the virus with reportedly the world's lowest testing rates. The country reported a rapid rise in cases in November with daily rising to 5,534 as the country grapples with the virus.

Health experts have repeatedly focussed on shortfalls in testing and contact tracing as the country struggles to contain the virus which has been spreading since March.

According to reports, patient occupancy at referral hospitals is at an all-time high even as the country's COVID-19 task force called for more action to ensure hospital occupancy does not rise further.

As the number of cases continues to rise, Indonesia's foreign minister Retno Marsudi said developing countries must have "equal access" to future coronavirus vaccines as he met representatives of UK-based pharma company AstraZeneca to cement a vaccine deal for the country.

Jakarta had first introduced restrictions in early April but had begun relaxing it in June, however, just weeks later coronavirus cases began to rise as authorities deployed soldiers and police to enforce the restrictions.