Democrats consider next steps after Bolton revelations on Trump 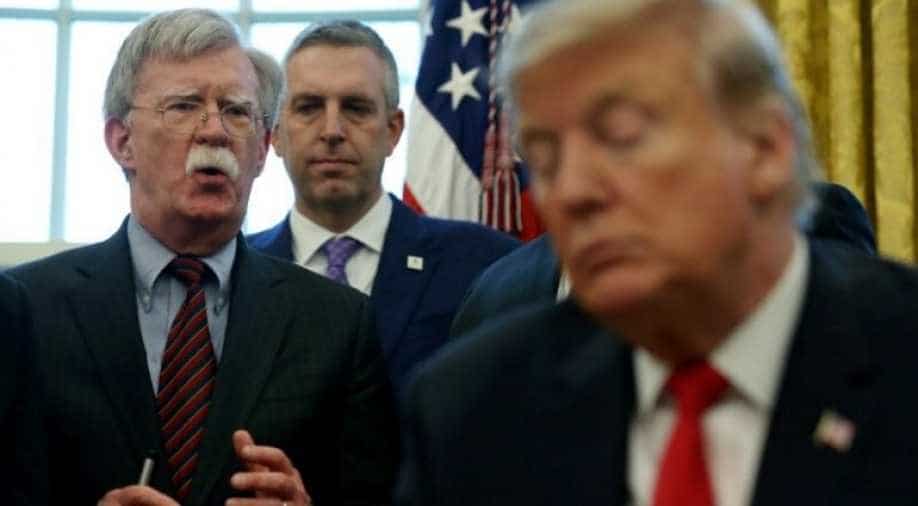 In a new book that paints a withering portrait of his ex-boss, the former national security adviser accused Trump of sweeping misdeeds that included explicitly seeking Chinese President Xi Jinping’s aid in winning a second term in the Nov. 3 presidential election.

Democratic lawmakers on Thursday said they were considering next steps, including a subpoena, on how to respond to allegations by former top White House aide John Bolton that President Donald Trump sought foreign help to get re-elected.

In a new book that paints a withering portrait of his ex-boss, the former national security adviser accused Trump of sweeping misdeeds that included explicitly seeking Chinese President Xi Jinping’s aid in winning a second term in the Nov. 3 presidential election.

The Republican president rejected the book as a "compilation of lies" and called his former adviser a "sick puppy" who was trying to avenge his firing.

Democrats were angry that Bolton saved his revelations for a book, rather than participate in the probe.

"We will continue to hold Trump accountable, and work to expose his abuses and corruption. In the coming days, we will be consulting with the Speaker and other chairs on next steps," he said in a statement.

The new allegations, Schiff said, are "further proof" that Trump's actions in Ukraine are part of a pattern of abusing his power and the US government for personal political gain.

Asked whether the Democratic-led House would consider subpoenaing Bolton now, US Representative James Clyburn said, "I think that's something we ought to consider."

Clyburn told CNN that Bolton cannot claim executive privilege and should "come down and let the American people know that this election this year is under threat of being invaded once again by a foreign power."

Bolton, who left the White House in September, also said Trump expressed a willingness to halt criminal investigations to favor dictators he liked, according to excerpts published in several major newspapers on Wednesday.

The allegations include far more extensive accusations of impropriety than those that drove Trump's impeachment.

The US Justice Department on Tuesday sued to block Bolton from publishing the book.

In the memoir, Bolton cited multiple conversations in which Trump demonstrated behavior "that eroded the very legitimacy of the presidency."

"There really isn't any guiding principle that I was able to discern other than what's good for Donald Trump's re-election," Bolton told ABC News.

Trump told China's Xi in June 2019 to go ahead and build camps for its mostly Muslim Uighur minority and other Muslim groups despite the Trump administration's criticism of China's mass detention.

Bolton also wrote that Trump said invading Venezuela would be "cool" even as the US government has said it does not favor using force to topple Venezuela's socialist President Nicolas Maduro.

At a summer 2019 meeting in New Jersey, Trump made some of his most alarming remarks to date on the media, saying journalists should be jailed so they have to divulge their sources and "should be executed," Bolton said, according to one excerpt.