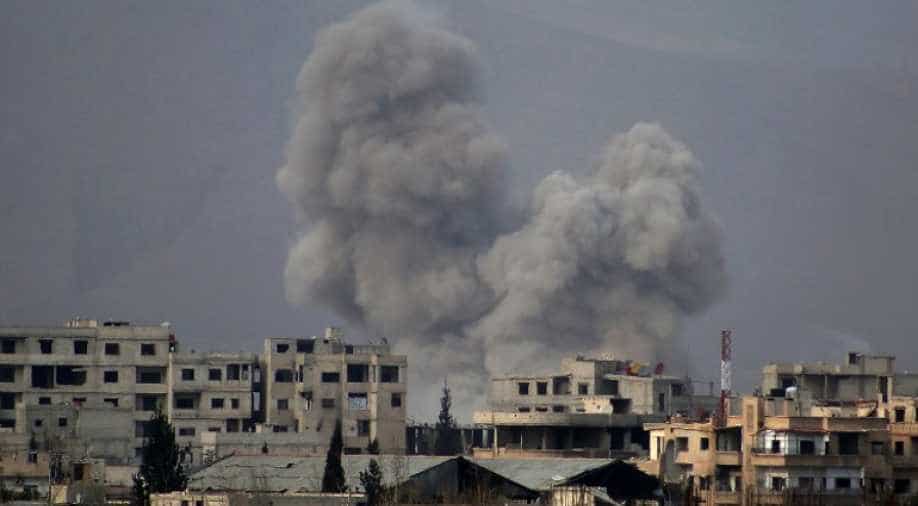 Smoke billows following Syrian government bombardment on the rebel-controlled town of Misraba, in the eastern Ghouta region on the outskirts of the capital Damascus on March 10. Photograph:( AFP )

The two main rebel groups in the region, which borders Damascus, have firmly and repeatedly denied negotiating with the Syrian regime

A delegation from Syria's rebel-held Eastern Ghouta was on Sunday considering a partial evacuation deal to halt a fierce government offensive, a negotiator and monitor told AFP.

The two main rebel groups in the region, which borders Damascus, have firmly and repeatedly denied negotiating with the Syrian regime.

But on Sunday, as the government's Russian-backed assault entered its fourth week, influential figures in one rebel-held town were considering a possible evacuation offer.

A committee from Hammuriyeh met with regime representatives on Saturday, a member of the committee told AFP, speaking on condition of anonymity.

"The committee discussed a proposed reconciliation that would guarantee exit for those that want to leave, both civilians and rebels, from Hammuriyeh to other areas in Syria under rebel control," the delegation member said.

Civilians and fighters may be bussed to rebel-controlled parts of Daraa province in Syria's south, or to Idlib in the northwest, held by rebels and a former Al-Qaeda affiliate.

"The committee is meeting on Sunday to take a decision and inform the regime. If they do not agree, there would be a resumption of the military operation on Ghouta, including Hammuriyeh," the delegation member added.

The Syrian Observatory for Human Rights, a Britain-based war monitor, said negotiations for evacuations from multiple towns were ongoing Sunday.

"A decision could be taken any moment for Hammuriyeh, Jisreen, and Saqba," said Observatory chief Rami Abdel Rahman.

In recent years, the regime has recaptured several areas around Damascus from rebels by pursuing fierce military offensives culminating in evacuation deals.

But Faylaq al-Rahman, the opposition faction that holds Hammuriyeh, denied it was engaging in talks.

"There are no direct or indirect negotiations with the Russian enemy or its allies," said the group's spokesman Wael Alwan.

"No one has been authorised to negotiate on behalf of Ghouta's revolutionaries, institutions, or the Free Syrian Army.