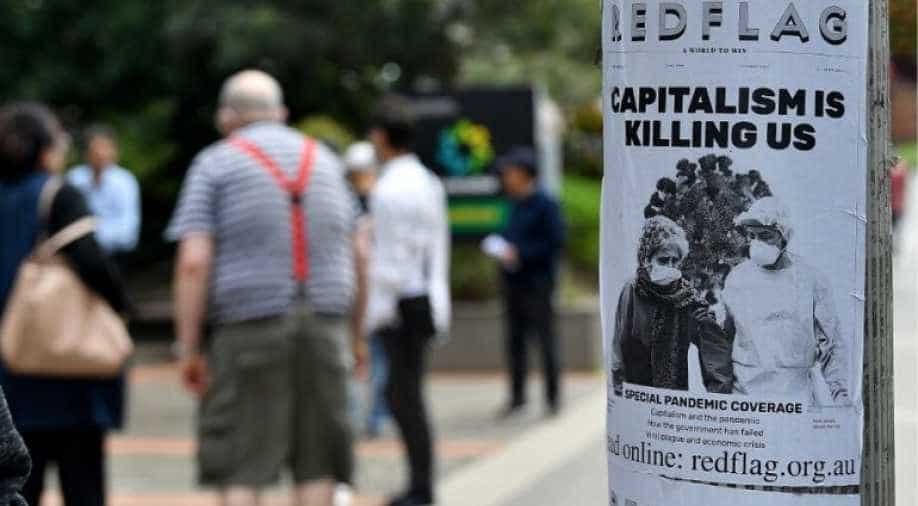 An anti-capitalist flyer is seen on a pole as people wait in a queue to receive benefit payouts, including unemployment and small business support as the novel coronavirus inflicts a toll on the economy Photograph:( AFP )

People applying for unemployment benefits in the US have gone up

As the number of coronavirus cases continues to rise, experts say global job losses as a result of the crisis would far exceed the 25 million estimated just days ago.

Earlier today, the number of COVID-19 cases in the US surpassed the count in Italy and China.

People applying for unemployment benefits in the US have gone up.

3.3 million Americans filed claims for unemployment last week as large parts of the US economy continued to remain shut. The surge in weekly applications was a stunning reminder of the damage the viral outbreak is inflicting on the economy. Requests for unemployment aid generally reflect the pace and intensity of layoffs.

"Well, this number of new claims for unemployment benefits is truly unprecedented and it represents the unprecedented nature of what we're going through right now. During the financial crisis and great recession, the highest or maximum number of new claims for unemployment benefits we saw was approaching, let's say, the 700,000 mark. So, we've done several times over that record number", Mark Hamrick, Senior Economic Analyst at Bankrate.Com, told Reuters.

Thousands of businesses have been shut as people’s movement remains restricted. The layoffs are sure to accelerate as the US Economy slides into a recession, with most employers cutting jobs to save expenses.

Some economists say that the unemployment rate in the US could reach 13 per cent by May.

Statistically, nearly a third of US workers could lose their jobs in the midst of this pandemic.

These numbers project a much bigger loss than even the Great Recession, whereby the unemployment rate reached ten per cent.

On the other side of the pond in Germany, researchers say that unemployment could top three million if the coronavirus crisis deepens.It is also expected that Germany’s economy will shrink by two per cent this year.

Countries across the world are struggling to contain the pandemic which has brought economic activity to an eerie halt.

Millions to be unemployed in India?

In India, where a 21-day nationwide lockdown has been announced, industry groups have warned that job losses could run into tens of millions. It is estimated that 38 million jobs could be lost in the tourism and hospitality sector alone.

In a bid to reduce financial losses, many companies have given employees the option to work from home.

Experts believe that the outbreak of coronavirus has the potential to make the concept of work from home a more common practice, thereby shifting the workplace dynamics.