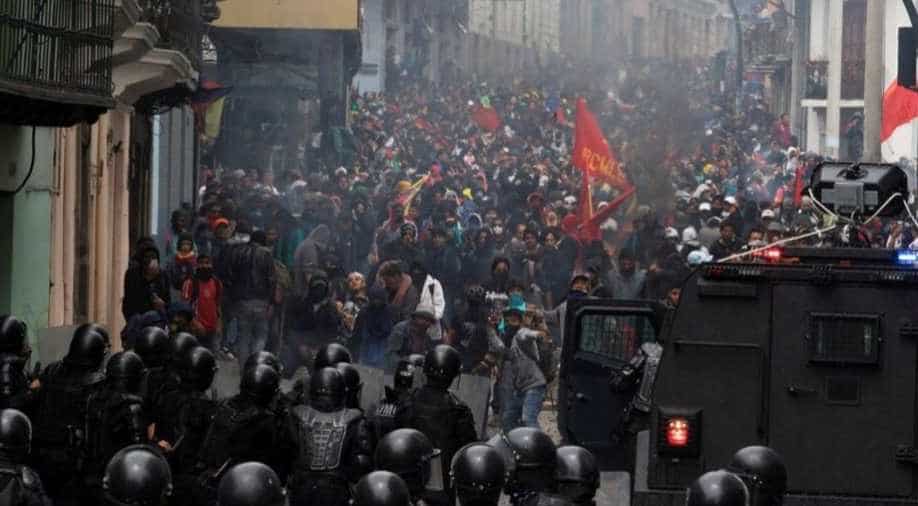 Police fired tear gas at protesters who threw stones and firebombs close to the seat of government in the historic centre of the capital Quito.

Clashes broke out between protesters and police in Ecuador after President Lenin Moreno declared a state of emergency Thursday following demonstrations against rising fuel prices due to the government scrapping subsidies.

Police fired tear gas at protesters who threw stones and firebombs close to the seat of government in the historic centre of the capital Quito.

Moreno told reporters he had taken the measure "to safeguard the security of citizens and to avoid chaos."

The protests -- the largest in a decade -- were led by the transport sector but included students and other groups.

They paralyzed public transportation in some areas, while clashes between police and demonstrators blocked roads.

More than 21 police officers had been injured in the violence while 277 people had been arrested for "vandalism," said defence minister Oswaldo Jarrin.

No figures were available for the total number of people wounded but some press photographers were hurt during the clashes.

The demonstrations came in response to increases of up to 120 per cent in fuel prices, which came into force on Thursday after the government eliminated subsidies as part of an agreement with the International Monetary Fund to obtain loans despite its high public debt.

Moreno blames the deterioration in the country's finances on his predecessor, Rafael Correa, who has sought asylum in Belgium.

He is wanted back home on suspicion of kidnapping a political opponent in 2012 during his 10-year presidency.

The emergency measure allows the government to restrict movement, to employ the armed forces to maintain order and to censor the press.

It will be in place for 60 days, after which it can be extended for a further 30 days, the government said.

School suspensions were extended into Friday, while buses and taxis stopped operating in Quito and other large cities.

Moreno said he would not allow protesters to "impose chaos," and also called for an end to "acts of vandalism and acts of violence."

Between 1996 and 2007, mass street protests forced the resignation of three presidents -- a turbulent period in which Ecuador had a total of seven holders of its highest office.