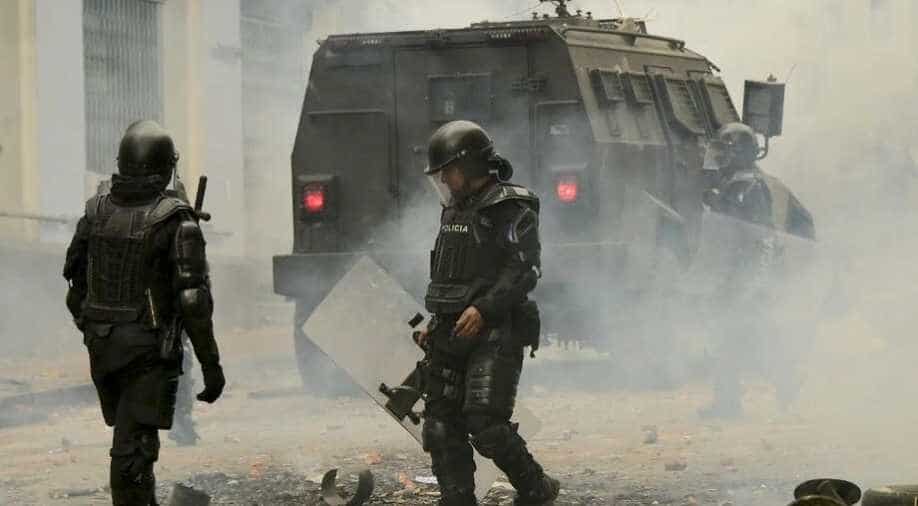 Police responded with tear gas in the worst unrest for years in the oil-producing Andean nation.

Ecuador's President Lenin Moreno declared a state of emergency on Thursday as protesters hurled stones and erected burning barricades after the end of decades-old fuel subsidies as part of a $2 billion government fiscal reform package.

Police responded with tear gas in the worst unrest for years in the oil-producing Andean nation.

"Down with the package!" demonstrators shouted, referring to measures enacted this week as Moreno puts Ecuador on a centrist, market-friendly path after years of leftist rule.

With the fuel subsidy cut taking effect on Thursday, taxi, bus and truck drivers blocked streets from early morning in the highland capital Quito and in Guayaquil on the Pacific coast.

In Quito, masked youths faced off with riot police who drove them back with tear gas and deployed armoured vehicles.

"It's an indefinite action until the government overturns the decree on subsidies. We're paralysing the nation," said bus transport leader Abel Gomez.

Officials say the elimination of fuel subsidies was necessary to lift a struggling economy and stop smuggling.

Moreno, who won election in 2017 to replace Rafael Correa, told reporters the "perverse" and highly costly subsidy, in place for 40 years, had distorted the economy and protests would not be allowed to paralyse Ecuador.

"To ensure citizens' security and avoid chaos, I have ordered a national state of emergency," the president said of the measure that suspends some rights and empowers the military to keep order.

"I have the courage to make the right decisions for the nation."

As darkness fell, several thousand marchers headed for the presidential palace in downtown Quito, which was ringed by police and soldiers. The protesters were eventually dispersed.

Early in the day, Interior Minister Maria Romo said 19 people were arrested, but that number was expected to rise.

Speaking mid-evening on a visit to Guayaquil, Moreno said that violent unrest was "almost totally" under control and praised security forces for restoring order.

With a population of more than 17 million people, Ecuador has a long history of political instability. Street protests toppled three presidents during economic turmoil in the decade before Correa took power in 2007.

Ecuador hopes to save about $1.5 billion a year from eliminating fuel subsidies. Along with tax reforms, the government would benefit by about $2.27 billion.

Earlier this week, Ecuador announced it was leaving the Organization of the Petroleum Exporting Countries (OPEC) to pump more oil and raise revenues.

The government wants to reduce the fiscal deficit from an estimated $3.6 billion this year to under $1 billion in 2020.

Ecuador's debt grew under Correa, who endorsed Moreno in the 2017 election but has since become a critic of his successor's turn toward more market-friendly economic policies.

Moreno's government has improved relations with the United States and reached a $4.2 billion loan deal with the International Monetary Fund (IMF) in February, dependent on unspecified structural changes.

Scepticism of the IMF runs strong in Ecuador and throughout Latin America, where many blame austerity policies for economic hardship.

"We're tired of false promises ... we can't be blind to a government that has done nothing for the people."