Chinese government bodies call for prohibition on vaping in public 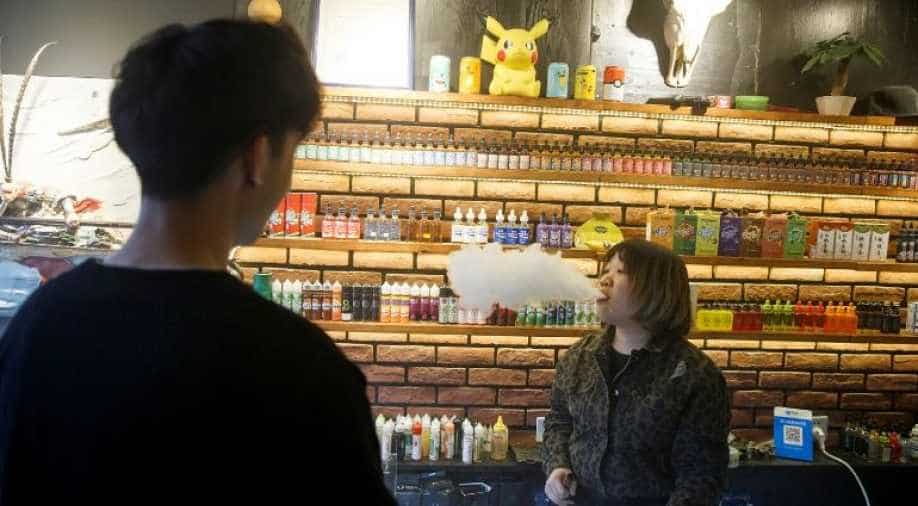 File photo: A saleswoman exhales vape as she talks to a customer at the Vape Shop that sells e-cigarette products in Beijing, China.  Photograph:( Reuters )

The regulators state that e-cigarette use in China "has shown a clear upward trend among the youth population", and add that the composition of e-cigarette liquid and its second-hand smoke are "unsafe".

Chinese government bodies have jointly called for a ban on consuming e-cigarettes in public, as the country gradually works to regulate its fast-growing vaping industry.

In a document dated October 29 and published online on Thursday, China's National Health Bureau, the State Administration for Market Regulation, the domestic tobacco monopoly China Tobacco, and five other bureaus urged local governments to curb both tobacco consumption among young people, as well as e-cigarette consumption.

The regulators state that e-cigarette use in China "has shown a clear upward trend among the youth population", and add that the composition of e-cigarette liquid and its second-hand smoke are "unsafe".

"There is no conclusive evidence that e-cigarettes can help to effectively quit smoking," the regulators state.

The agencies add that China "must actively promote the prohibition of electronic smoking in public places".

China produces an overwhelming majority of the e-cigarettes sold on the global market, though only a tiny fraction are purchased by domestic buyers.

That is changing quickly as dozens of Chinese start-ups, inspired by the potent e-cigarette made by Juul Labs Inc that grew popular in the United States, have flooded the market with products of their own targeting local consumers.

At present there are no national-level regulations providing standards for the manufacture and sale of e-cigarettes in China. Industry insiders expect that such regulations will be released in the near future.

China's tobacco industry is controlled by China Tobacco, a state monopoly that doubles as the tobacco market's regulator. In 2018, China Tobacco generated 5.45 per cent of China's tax revenue, amounting to 10.8 trillion yuan.