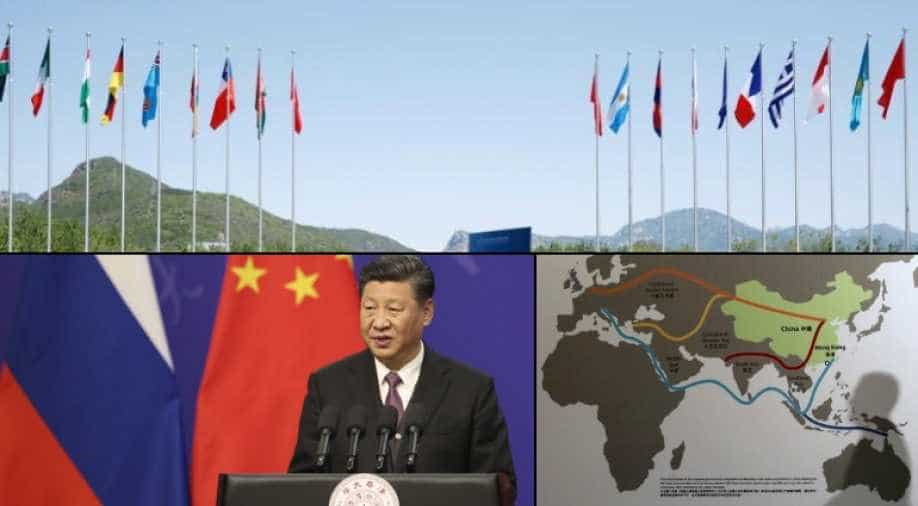 Belt and Road Initiative. Photograph:( Others )

China’s boom has been powered by debt as the Communist Party began chasing superpower status with a credit card and the world knows when you buy something with a credit card, you are spending money that you don’t really have and one day you will have to return it.

The Communist Party has set ambitious targets for itself. It wants to dominate this century and wants to be the ultimate superpower by dethroning America. It's a mission requires cash and a lot of it.

There are three telltale signs that the Dragon is running out of cash. Firstly, China's tax revenue growth has dropped. In 2018, tax revenues grew by 6.2 per cent. In 2019 it was less than four per cent. Secondly, China's budget deficit is growing. It touched almost five per cent last year but the world knows these figures are fudged.

The International Monetary Fund(IMF) says the shortfall is not five per cent but more than 12 per cent and finally, the Belt and Road is full of roadblocks even before the pandemic, it was widely believed that it was an over-ambitious plan.

In 2016, China gave 46 loans worth well over $1 billion dollars all of it went for overseas investment projects. In 2018, China only funded 28 projects and now, due to the coronavirus projects have been delayed.

There are also demands for debt relief as some countries have even shelved projects. The BRI project is Xi Jinping’s dream but, it could now become the reason for his downfall. The reason is simple - it costs too much.

A report in 2017 estimated China needed $5 trillion dollars in the next five years to keep the BRI project going which basically means BRI’s five-year budget from 2017 to 2022 is $5 trillion.

The Chinese state and its subsidiaries have lent around $1.5 trillion to 150 countries in the form of direct loans making China the world’s biggest lender in the world- bigger than the World Bank or the IMF.

China-backed international institutions have also pitched in including China’s silk road infrastructure fund, the Asian infrastructure investment bank and the new development bank based in Shanghai.

According to numbers from 2017, their contribution is around 190 billion dollars.

However, there are no answers on how China is getting the rest of the money but Beijing has a bigger headache right now which is the demand for debt relief from countries which cannot afford to pay right now.

At home, China is struggling with banks in poor health and abroad Chinese cash has gone to high-risk countries. The organisation for economic co-operation and development(OECD) ranks countries based on their risk profile.

In the list of 20 names, 17 can be deemed as high-risk who have weak credit ratings. The risk of default is very high since the Belt and Road Initiative began China has lent up to $350 billion to member countries. about half of them are high-risk debtors.

Several of them have called for debt relief in the last two decades even as China has embarked on a lending spree. It became the largest banker for the developing world but now it faces potential collapse.