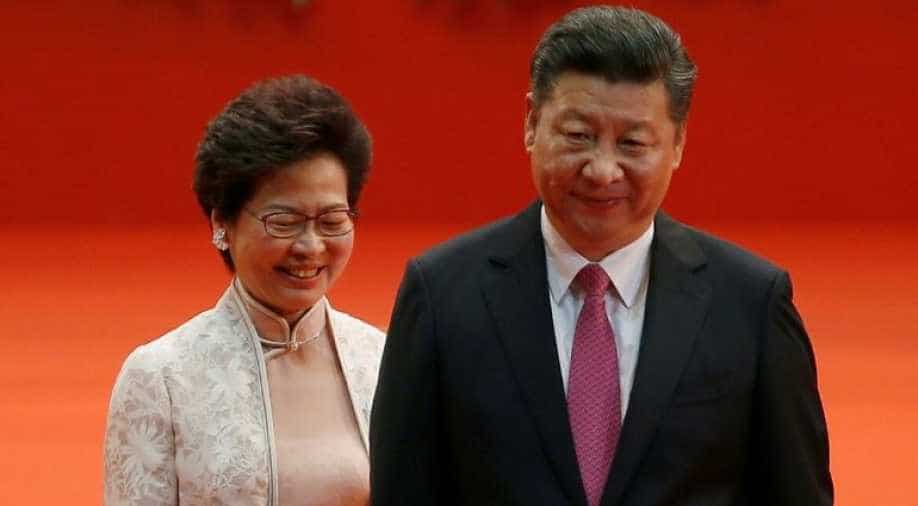 As violent protests roil Hong Kong, top Chinese leaders in recent months have been managing their response from a villa on the outskirts of Shenzhen

Tightening control over efforts to manage the upheaval in Hong Kong, the Chinese leadership has set up a crisis command centre on the mainland side of the border and is considering replacing its official liaison to the restive semi-autonomous city, people familiar with the matter said.

As violent protests roil Hong Kong, top Chinese leaders in recent months have been managing their response from a villa on the outskirts of Shenzhen, bypassing the formal bureaucracy through which Beijing has supervised the financial hub for two decades.

Ordinarily, communications between Beijing and Hong Kong are conducted through a Chinese government body: the Liaison Office of the Central People's Government in Hong Kong. The Liaison Office is housed in a Hong Kong skyscraper stacked with surveillance cameras, ringed by steel barricades and topped by a reinforced glass globe.

In a sign of dissatisfaction with the Liaison Office's handling of the crisis, Beijing is considering potential replacements for the body's director, Wang Zhimin, two people familiar with the situation said. Wang is the most senior mainland political official stationed in Hong Kong.

The office has come in for criticism in Hong Kong and China for misjudging the situation in the city. "The Liaison Office has been mingling with the rich people and mainland elites in the city and isolated itself from the people," a Chinese official said. "This needs to be changed."

The Liaison Office may face increased pressure after city voters delivered a resounding defeat to pro-Beijing parties in local district elections on Sunday. Pro-democracy candidates won over 80 per cent of the seats, securing their first-ever majority after running a campaign against Beijing's perceived encroachments on Hong Kong's liberties.

The State Council's Hong Kong and Macau Affairs Office and the Liaison Office in Hong Kong did not reply to faxed requests for comment.

The office of Hong Kong Chief Executive Carrie Lam declined to comment for this story.

The crisis centre is located at the secluded Bauhinia Villa, a property owned by the Hong Kong Liaison Office, according to sources and official media, and named after the orchid that adorns the Hong Kong flag and currency. The villa, located just across Hong Kong's border with the mainland, has served as a crisis centre before: Senior Chinese officials stayed at the resort during the pro-democracy "Occupy Central" protests that rocked Hong Kong in 2014.

Top mainland officials have been gathering at the leafy compound to plot strategy and issue instructions aimed at defusing the crisis, according to six people familiar with the matter. Beijing authorities have been summoning key Hong Kong officials to meet at the villa during the five months of the increasingly violent anti-government protests, the sources said.

Among those who have attended, two of the people said, is embattled city leader Carrie Lam, who in September dramatically scrapped the controversial extradition bill that had ignited the protests, with approval by China's top leadership. Hong Kong police officials, business leaders and local pro-Beijing politicians have been summoned to the villa as well.

In an indication of the operation's importance, Chinese President Xi Jinping is receiving daily written briefings from Bauhinia Villa, said two officials and another person familiar with the operation.

The mainland Chinese and Hong Kong officials interviewed for this article spoke on condition of anonymity, citing the sensitivity of the matter.

A Shenzhen businessman with close ties to Chinese officials described the villa complex as a "frontline command centre" that authorities are using as a base for coordinating and monitoring the Hong Kong situation in a secure environment. The complex is "packed with people," the businessman said.

The establishment of the Shenzhen villa as a crisis centre with a channel to top leader Xi points to the gravity and delicacy of the situation in Hong Kong, diplomats said.

Mass protests erupted in June over an extradition bill that would have allowed individuals to be sent for trial to the mainland, where justice is controlled by the ruling Communist Party. Beijing wants to restore order in the city, but without being seen to be calling the shots.

Though the extradition bill has been killed, the protests have grown angrier, powered by a broad perception that Beijing is meddling improperly in city affairs and by complaints of police brutality. Hong Kong is governed under a charter which grants British-style rule of law until 2047, and its high degree of autonomy is widely seen as key to its prosperity as an international financial hub.

City and mainland officials say the police response has been measured and that any violence has been initiated by extreme protesters.

The lakeside setting of the villa, in a wooded neighbourhood, enables Beijing and Hong Kong officials to meet away from the glare of the Hong Kong media and the chaos of the city's protest-clogged streets.

The use of Bauhinia Villa to manage the crisis sets up a supplementary channel to the system Beijing put in place to oversee Hong Kong after China regained control of the city from Britain in 1997.

The Liaison Office, which reports to China’s State Council, has long served as the platform for Beijing to radiate its influence in the city. The office fosters relationships with the Hong Kong government as well as establishment figures and an array of pro-Beijing and youth groups, including business and clan associations from Chinese provinces and regions.

"The Hong Kong situation has increasingly made Beijing authorities uncomfortable," said Sonny Lo, a veteran Hong Kong political commentator. Their desire for security and discretion, he said, is "the reason they select Shenzhen rather than Hong Kong as a kind of parallel headquarters in dealing with the Hong Kong crisis."

Senior Chinese officials initially tried to find a middle ground between not capitulating to the demands of the protesters, while trying to avoid a bloody crackdown that could damage the city's stature as a business centre, according to three of the people familiar with the Bauhinia operation. Beijing sought to give the impression it wasn't intervening in Hong Kong even after a million people took to the streets on June 9, the people said.

Shortly after that show of mass defiance, however, the senior-most Chinese leader in charge of Hong Kong affairs took action. That official, Vice Premier Han Zheng, authorized Lam to communicate directly with his office, rather than going through the Liaison Office, according to a person briefed on the matter, effectively establishing a hotline.

Subsequently, vice minister-level officials with China's Ministry of Public Security, Ministry of State Security, the Cyberspace Administration of China and other departments all visited the villa, three of the sources said, an indication of just how seriously Beijing took the situation.

The two most senior Chinese leaders overseeing Hong Kong have been using Bauhinia Villa to deal more closely with the local leaders of the restive city while remaining behind the scenes.

One is Zhang Xiaoming, the head of the Hong Kong and Macau Affairs Office, which sits under China's top policy-making body, the State Council. He has been a regular presence at the villa during the crisis, according to two sources who met with him there. A third person who met Zhang at Bauhinia Villa said Zhang spoke in detail about the now-shelved extradition bill and its importance, as well as subsequent attempts by Beijing to quell the unrest.

The other is Vice Premier Han himself. A day after Hong Kong protesters blocked access to the city's legislature on June 12, Han arrived at Bauhinia Villa and summoned Lam for a meeting, according to a person briefed on their discussions. Gathered at Bauhinia was a multi-departmental team of Chinese public security, cybersecurity and intelligence officers, as well as advisers on Hong Kong affairs, three sources said.

The Liaison Office and senior pro-Beijing politicians in the city "didn't know about the withdrawal until close to the decision," a senior Hong Kong official said.

The concession didn't placate the protesters, who demanded full and formal scrapping of the bill.

As the protests have persisted, Beijing has taken a more visible role in Hong Kong: Chinese aviation authorities called for Hong Kong's Cathay Pacific Airways to suspend staff who supported or participated in the demonstrations, mainland paramilitary forces conducted exercises openly just across the border in Shenzhen, and China last week criticised a Hong Kong court ruling that overturned the city's ban on face masks used by protesters, rare interference in the territory's judiciary.

Bauhinia Villa has long been an outpost for mainland China's dealings with semi-autonomous Hong Kong.

In addition to serving as a crisis centre during the 2014 protests, the villa has been used as a low-key venue for Chinese officials to meet with city figures, with lodging facilities and ample space for conferences and events. Bauhinia Villa also has hosted delegations from the Hong Kong pro-establishment and pro-Beijing camps for training sessions and preparatory meetings before annual legislative sessions in Beijing. Another government-owned resort that hosts official functions, Kylin Villa, sits nearby.

Xi himself stayed in Bauhinia Villa before he took power in 2012 and planted a tree inside the lake-side resort.

Security is tight, with checkpoints, spiked fences topped with barbed wire and numerous surveillance cameras. At the back is a steep tree-covered hill ringed with fencing, while on another side lies a conference centre. A Reuters journalist was turned away recently when he approached the property.