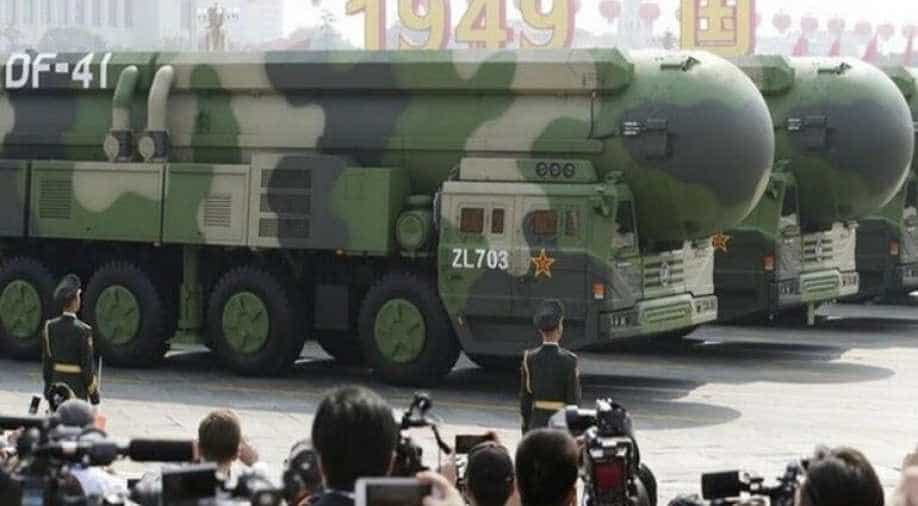 The Dongfeng-41 made its debut along with a clutch of new military hardware showcased at the National Day parade. Photograph:( ANI )

The Dongfeng-41 is a ballistic missile that is said to have the furthest range of any nuclear missile and could reach the US in 30 minutes.

China unveiled the Dongfeng-41 intercontinental-range ballistic missile, touted to be the most powerful missile on the planet at the National Day parade in Beijing on Tuesday.

The missile capable of carrying 10 independently targeted nuclear warheads and could theoretically, hit the United States in 30 minutes, according to the Missile Defense Project at the Center for Strategic and International Studies.

The Dongfeng-41 made its debut along with a clutch of new military hardware showcased at the National Day parade, as China observed its 70th anniversary of Communist rule.

China has the world's largest standing army and the world's third-largest air force. The day kicked off earlier with an opening address by Chinese President Xi Jinping in Tiananmen Square in which he said: "No force can stop the Chinese people and the Chinese nation forging ahead."

This is Xi's fourth major military parade as Chinese leader. It was followed by a show of discipline and order from marching troops pageant involving more than 100,000 performers at Chang'an Avenue.

Helicopters flew national flags across the sky above BeijingApart from traditional air drones, China has also displayed its underwater vehicles and new stealthy DR-8 drones thought to be able to fly up to five times the speed of sound.

Moreover, a large number of tanks paraded ahead of the other heavy weaponry, including what is expected to be some never-before-seen machines.

A giant portrait of Communist leader Mao Zedong, under whose leadership the People's Republic of China was founded in 1949, was carried down at the Chang`an Avenue while videos of him played on big screens.

The parade involved around 15,000 personnel. Today`s parade also features more than 160 aircraft and 580 pieces of equipment, alongside 59 formations and a military band, as per state-run news agency Xinhua.

Earlier on Monday, in a rare gesture, President Xi Jinping paid tribute to Mao Zedong ahead of the celebration to mark 70 years of communist rule in the country.