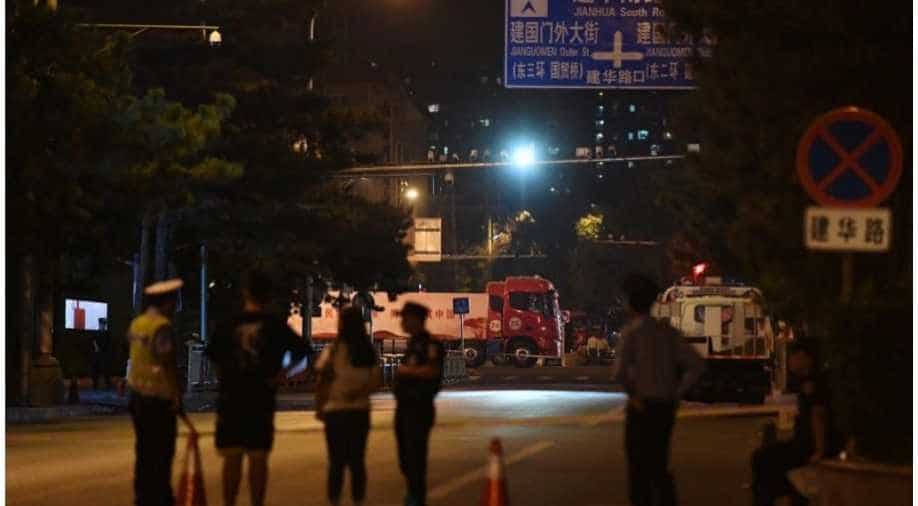 The enormous Avenue of Eternal Peace was closed to traffic for about a dozen kilometres (seven miles) to allow troops to parade around Tiananmen Square, the symbolic heart of Chinese power.

The centre of Beijing was under lockdown early Sunday for a nighttime parade rehearsal by the Chinese military which is preparing for October 1 ceremonies to mark Communist China's 70th anniversary.

The enormous Avenue of Eternal Peace, which leads to Tiananmen Square and runs east-west, was closed to traffic for about a dozen kilometres (seven miles) to allow troops to parade around Tiananmen Square, the symbolic heart of Chinese power.

It is where Mao Zedong in 1949 proclaimed the founding of the People's Republic of China.

The official news agency Xinhua said about 90,000 people were "involved in the rehearsal and related supporting services", and organisers said the run-through "reached the expected results".

Areas around the Avenue of Eternal Peace were gradually closed to traffic from late Saturday afternoon and were expected to stay off-limits until Sunday morning, causing traffic jams.

Security forces blocked access to residences with views of the avenue, ordering several foreign media outlets in the area to leave their offices for the weekend.

"We warmly celebrate the 70th anniversary of the founding of the People's Republic of China," proclaimed immense signs being transported by trucks heading towards Tiananmen Square.

Other rehearsals are expected each weekend leading up to October 1, leaving residents facing the same restrictions, a guard told AFP.

Every 10 years Beijing traditionally marks the republic's anniversary with a giant military parade.

The army said at the end of August that the next parade would be larger than those in 1999 and 2009, and even bigger than one in 2015 which commemorated the end of World War II 70 years earlier.

On that occasion, 12,000 soldiers marched -- far fewer than the number of people involved in Sunday's rehearsal.

The parade is expected to showcase some of the most advanced weaponry of the Chinese army, in an effort to drum up patriotic fervour.

But it will not be targeted "at any countries or districts," General Cai Zhijun, a member of the Chinese Army General Staff, said last month. Cai said the size of the military parade was not a sign of aggression and the Chinese army was "committed to safeguarding world peace and regional stability."

This year's anniversary comes at a sensitive time for Beijing. It is in a trade war with the United States, Hong Kong is rocked by demonstrations, and it faces criticism over the treatment of Muslims in the western Xinjiang region.

China's two-million-member armed forces is the world's largest and its military budget is the second-biggest, though still far behind that of the United States.