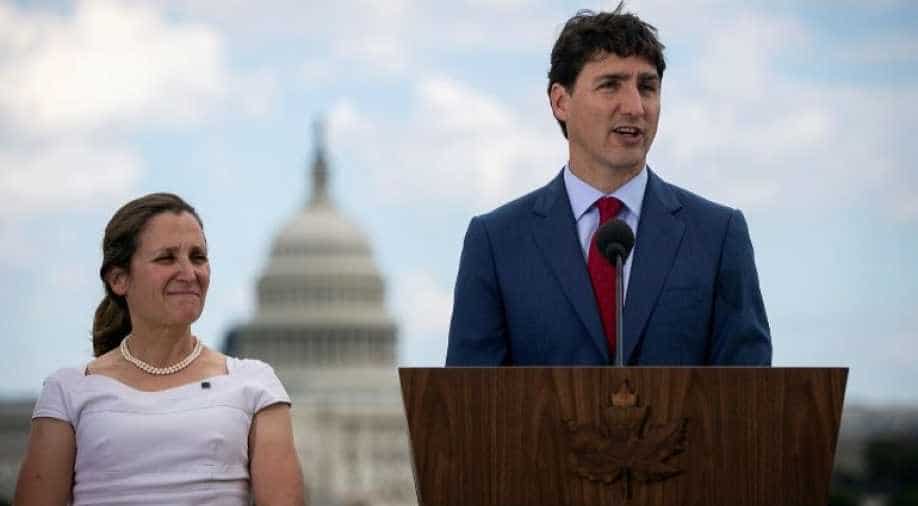 Canadian Prime Minister Justin Trudeau will shuffle his cabinet on Wednesday and insiders say he may well move Foreign Minister Chrystia Freeland into a new job and ask her to prevent a national unity crisis.

Trudeau's Liberals lost their majority in an October election and now have no legislators in the western energy-producing provinces of Alberta and Saskatchewan, which oppose tougher environmental laws that critics say could cripple the oil industry. Polls show separatist sentiment is growing.

Public broadcaster Radio-Canada said on Tuesday that Freeland would be replaced by Infrastructure Minister Francois-Philippe Champagne, indicating she will move.

Freeland was born in Alberta and grew up there. Three Liberal sources say Trudeau's team is seriously considering whether to make her minister of intergovernmental affairs, the government's point person to deal with the provinces.

"There are still some big foreign affairs files but does she need to handle them? No," said one senior Liberal, who requested anonymity given the sensitivity of the situation.

"You have to take the people with star power and deploy them to address your biggest concerns."

National unity tensions are a particularly painful issue in Canada, where the province of Quebec held a 1995 referendum on independence that only just failed.

Alberta premier Jason Kenney regularly castigates Ottawa for treating his province badly and the Liberal government's challenge grew ever larger on Tuesday when workers at Canadian National Railway went on strike, hitting western exports such as grain and oil.

The Liberal sources said nothing had been decided finally, adding last-minute changes were still possible. Trudeau is to due unveil his cabinet at 1.30 pm Eastern Time (1830 GMT) and hold a news conference at 3.30 pm.

The offices of Trudeau and Freeland declined to comment.

A potential drawback is that the minister of intergovernmental affairs is a second tier role and would on paper represent a demotion for Freeland.

One solution could be to also give her the job of deputy prime minister, which is a largely ceremonial post and much less significant than the role of U.S. vice-president.

Giving Freeland the formal title though could help strengthen her credentials as one of the leading candidates to one day replace Trudeau. Trudeau did not name a deputy prime minister after taking power in 2015.

As coronavirus deaths rise in US, funeral homes overwhelmed with bodies