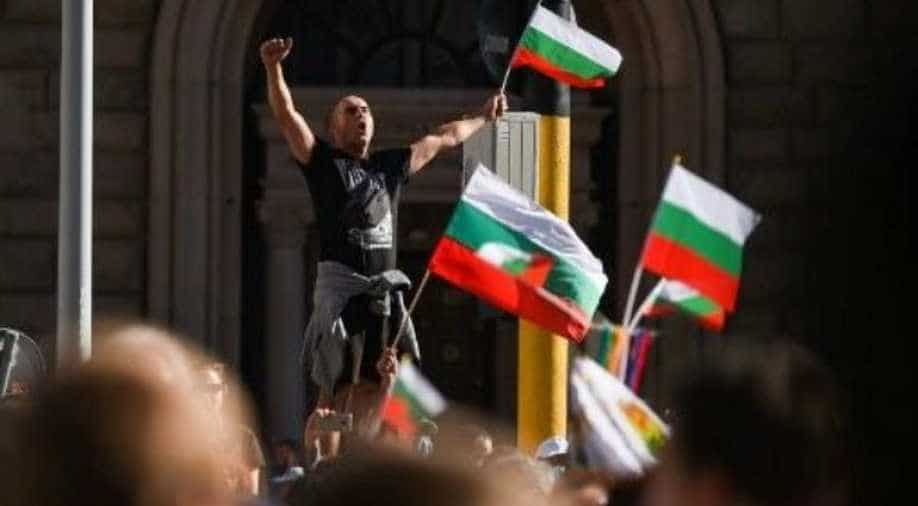 A file photo of Bulgaria's flags being waved by citizens of the country Photograph:( AFP )

More than 5,000 demonstrators gathered in Sofia in pouring rain to shout "Mafia!" and "Resignation!" for a 30th consecutive evening on Friday

Anti-government protesters in Bulgaria had restored their week-long blockades in central Sofia by early Saturday, less than a day after they were removed by police.

More than 5,000 demonstrators gathered in Sofia in pouring rain to shout "Mafia!" and "Resignation!" for a 30th consecutive evening on Friday in the biggest protest wave in the poorest EU country since 2013-14.

Rallies were also held in at least five other cities.

Protesters had occupied major crossroads in Sofia, Varna and Plovdiv, severely disrupting traffic, and blocked a road in central Bulgaria before police moved to clear their tents on Friday, warning that no more blockades would be tolerated.

Despite the warning, the Sofia security police did not intervene, saying Saturday that protesters had prepared to respond with stones and bottles.

The protesters are demanding the resignation of the conservative cabinet of Prime Minister Boyko Borisov and of chief prosecutor Ivan Geshev, accusing them of being beholden to behind-the-scenes oligarchs.

Borisov has resigned his previous two premierships. His current minority coalition with two nationalist parties decided Thursday that they would fulfil their current mandate that runs until March 2021.

Polls this week showed that the ongoing protest wave is severely eroding support for Borisov and his conservative GERB party.