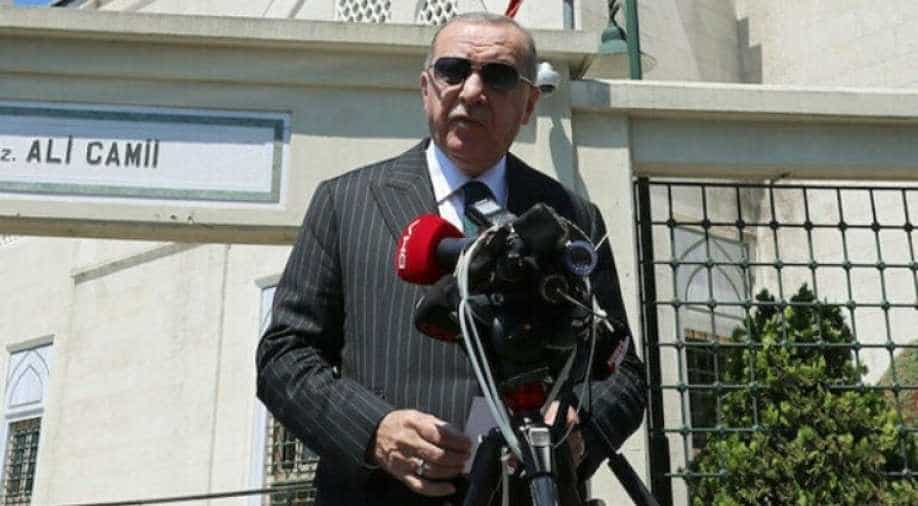 Erdogan, who is accused by critics of chipping away at the Muslim-majority country's secular pillars, announced Friday that Muslim prayers would begin on July 24 at the UNESCO World Heritage site.

President Recep Tayyip Erdogan on Saturday rejected worldwide condemnation over Turkey's decision to convert the Byzantine-era monument Hagia Sophia back into a mosque, saying it represented his country's will to use its "sovereign rights".

Erdogan, who is accused by critics of chipping away at the Muslim-majority country's secular pillars, announced Friday that Muslim prayers would begin on July 24 at the UNESCO World Heritage site.

''Accusations against our country about Hagia Sophia directly target our sovereign rights,'' said Erdogan, responding to concern over the proposal from the West, particularly Greece, France and the United States.

''We are determined to continue to protect the rights of Muslims, our country’s majority faith, as well as members of all other faiths and religions,'' he added at the formal opening of another mosque in Istanbul.

In the past, he has repeatedly called for the stunning building to be renamed as a mosque.

"Those who do not take a step against Islamophobia in their own countries ... attack Turkey's will to use its sovereign rights," Erdogan said during a ceremony he attended via video-conference.

A magnet for tourists worldwide, the Hagia Sophia was first constructed as a cathedral in the Christian Byzantine Empire but was converted into a mosque after the Ottoman conquest of Constantinople in 1453.

Erdogan's announcement came after the cancellation by a top court of a 1934 cabinet decision under modern Turkey's secularising founder Mustafa Kemal Ataturk to preserve the church-turned-mosque as a museum.

Erdogan went ahead with the plan despite an open appeal from the NATO ally the United States as well as Russia, with which Ankara has forged close relations in recent years.