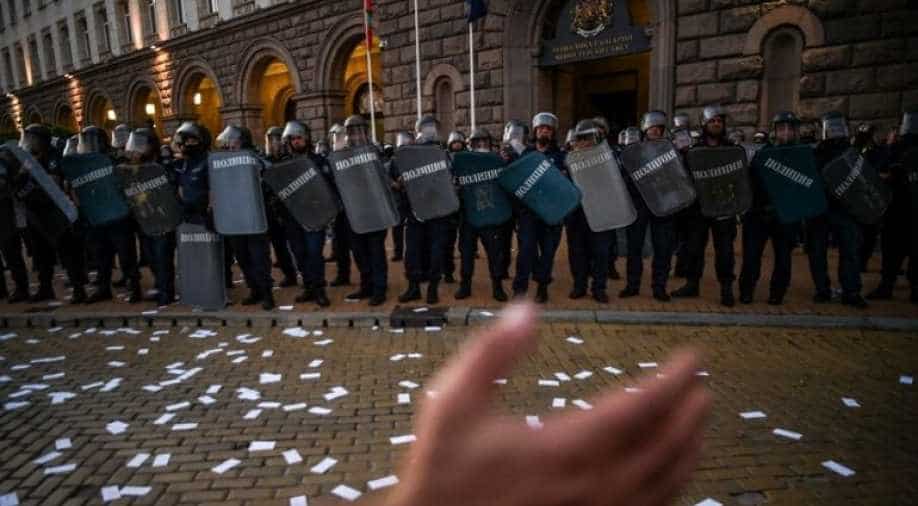 vA protestor opens his arms in front of police officers during an anti-government protest in Sofia, on July 11, 2020. Photograph:( AFP )

Over 3,000 protesters shouted "Mafia" and "Resign" outside the government headquarters in Sofia and marched to parliament

Thousands of Bulgarians gathered for a fourth day  on Sunday in Sofia and other cities to protest against corruption and demand the resignation of the conservative government.

Over 3,000 protesters shouted "Mafia" and "Resign" outside the government headquarters in Sofia and marched to parliament.

The protests in the capital were sparked by an unprecedented raid by heavily armed police and prosecutors on the presidential headquarters on Thursday.

President Rumen Radev's legal affairs and anti-corruption secretary and his security and defence advisor were detained for questioning and their offices searched as part of two separate probes into influence-peddling and disclosure of state secrets.

Protesters also gathered in at least ten other towns on Sunday.

The searches on Thursday sparked public anger and brought thousands of demonstrators onto the streets of Sofia to condemn the raids as an attack by the government and the chief prosecutor against the Socialists-backed Radev.

The president is an outspoken critic of the cabinet of Prime Minister Boyko Borisov, accusing it of "links with oligarchs".

Borisov on Saturday refused to resign but opponents launched an online petition aiming to gather as many as one million signatures to demand his ouster.

The Socialist opposition in parliament also said Sunday that they would table a no confidence motion against the cabinet for "corruption" next Wednesday, appealing to protesters to back them.

Friday's rallies turned violent with 18 protesters arrested, including two men who were hospitalised after being beaten, prompting an even bigger turnout on Saturday when Radev joined protesters in their demand for the resignation of the cabinet and the chief prosecutor.

Police had appealed for restraint ahead of Sunday's demonstration and the interior ministry announced late Sunday that the rally had ended without incident.

Thirteen years after joining the EU as its poorest country, Bulgaria has also remained the bloc's most graft-prone member state, according to Transparency International's corruption perception index.

A new rally is scheduled for Monday afternoon and another nationwide protest for Thursday.