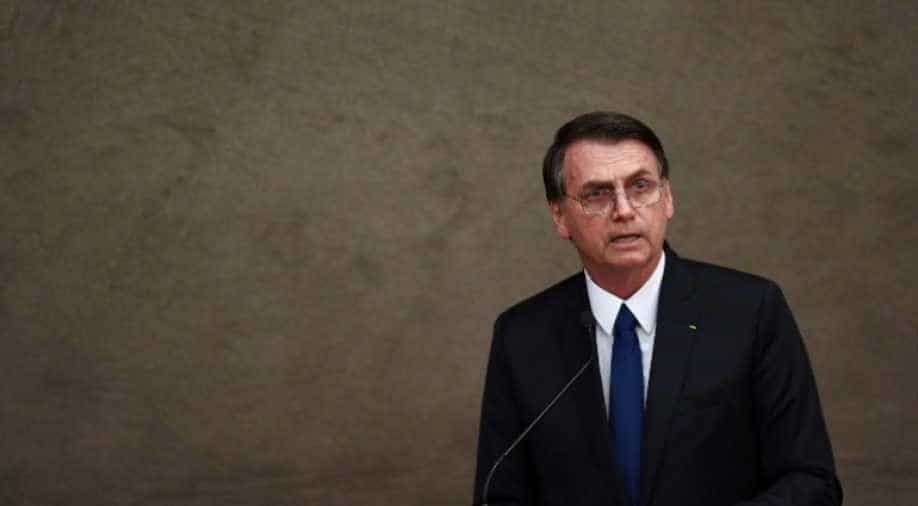 That's the final composition that has emerged after weeks of announcements and casting about to fill the top posts of 22 ministries, down from 29 in the outgoing administration.

Brazil's next government, under incoming far-right president Jair Bolsonaro who takes power in three weeks, will be neo-liberal economically, morally conservative and heavy reliant on a contingent of ex-military figures.

That's the final composition that has emerged after weeks of announcements and casting about to fill the top posts of 22 ministries, down from 29 in the outgoing administration.

Seven of the ministers will be military men. Eight have technocrat profiles. And seven are politicians.

All are united by fierce criticism of the leftwing governments that ruled under former president Luiz Inacio Lula da Silva (2003-2010) -- who is now in prison for corruption -- and his protegee Dilma Rousseff (2011-2016) -- whose second mandate was cut short by impeachment.

Bolsonaro said at a ceremony on Monday he would govern "without distinction of social origin, race, sex, age or religion."

There are just two women in Bolsonaro's government, which is double the number in the outgoing lineup under President Michel Temer.

There are no blacks, despite half of Brazil's population being at least partly descended from Africans.

Oliver Stuenkel, a professor of international relations at the Getulio Vargas Foundation, said there were three distinct groups to be seen: "A nationalist, anti-globalist group that is oriented towards the populist politics of Donald Trump, a group of neo-liberals that controls the economic part, and another of military men with influence in various areas."

He added: "We'll soon see how the power play will work out between these three axes."

A big challenge for Bolsonaro will be to bring Brazil's economy back to full health. The country exited its worst recession on record two years ago but has put in an anemic performance since.

To that end he has tapped Paulo Guedes, a product of the University of Chicago's economic liberalism, to head up an economy superministry in charge of finances, planning, trade and a chunk of the scrapped labour portfolio.

Guedes, a strong advocate of privatization and small government, has named a bunch of veteran economists -- nicknamed the "Chicago Oldies" by the Brazilian press -- to take charge of state oil company Petrobras, the central bank and the BNDES development bank.

"The formation of the economic team suggests that Guedes will enjoy fairly big autonomy to carry out the reform agenda without interference from other parts of the government," Thomaz Favaro, an analyst at the firm Control Risks, told AFP.

Another priority is to fight corruption and rampant crime.

Another superministry -- for justice this time -- will be under the command of Sergio Moro, a celebrated anti-graft judge who led the Car Wash investigation that led to Lula and other politicians being sent to prison.

But it remains to be seen how Moro will be able to operate under Bolsonaro's extreme right direction, with divergences already possible over the next president's push to ease gun laws and to label radical rural groups as "terrorists."

Wladimir Gramacho, a political sciences professor at the University of Brasilia, said Moro and Guedes, as well as Onyx Lorenzoni who will become Bolsonaro's chief of staff, "have the confidence of the three pillars supporting a government: Congress, the economy and public opinion."

Brazil's 63-year-old leader-to-be has never hidden his nostalgia for the 1964-1985 military dictatorship he served, nor his intent to dose his cabinet with ex-military types.

In addition to the post of vice president, retired generals have been named as the ministers of defense, the secretariat of government, institutional security, mines and energy, science and technology, infrastructure, and the comptroller's office.

"We'll see what the military men in the future government bring and their interest in taking on greater portions of power," Gramacho told AFP.

Bolsonaro has also brought in people who share his ultraconservative values -- he is against abortion and gender identity as defined by individuals -- and his Christian faith, as well as his pro-US, anti-globalization, anti-left views that include scepticism toward climate change.

His future foreign minister, Ernesto Araujo, has promised to clean out any trace of "cultural Marxism" from his ministry. His education minister, a Colombian philosopher named Ricardo Velez Rodriguez, has stated that "it's nature that defines gender."

His environment minister is a lawyer, Ricardo Salles, who is sympathetic to the powerful rural sector according to Greenpeace and other groups fighting deforestation.

The new minister for human rights, women and the family will be a female evangelical pastor, Damares Alves, who has surprised some by saying she believed it was possible to have "a government of peace between the conservative movement, the LGBT movement and other movements."

Bolsonaro has eschewed the custom of doling out ministries to parties supporting him.

Instead he has put some portfolios -- agriculture for instance -- in the hands of what is being called the "BBB" lobbies, standing for "Beef, Bullets and the Bible."

They cut across several parties and put forward the interests of Brazil's powerful agribusiness groups, gun advocates, and an influential and growing evangelical movement.