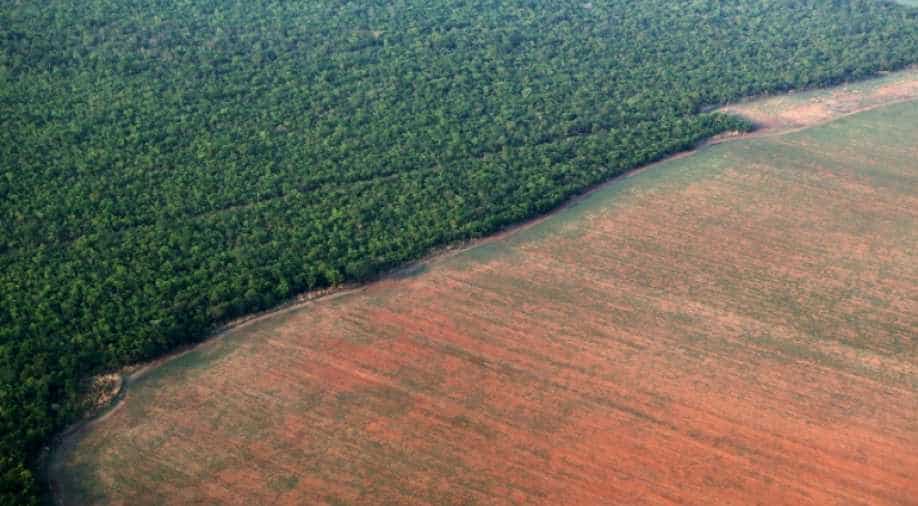 The Amazon rainforest (L), bordered by deforested land prepared for the planting of soybeans. Photograph:( Reuters )

On Monday, Bolsonaro redeployed the military to stop deforestation in the world's largest rainforest.

Brazil's President Jair Bolsonaro on Tuesday issued a broad 120-day ban on unauthorized outdoor fires as the country suffered its worst drought in decades ahead of the annual burning season in the Amazon rainforest.

On Monday, Bolsonaro redeployed the military to stop deforestation in the world's largest rainforest.

Both moves repeat policies instituted by Bolsonaro annually since 2019, in response to the international outcry that Brazil was not doing enough to stop the destruction of the vital bulwark to climate change.

Neither policy has previously been effective in lowering deforestation or forest fires. Generally, criminals first cut down the valuable timber and later set fire to the area, clearing it for future agricultural use in speculative land grabs.

Deforestation in the Amazon has accelerated under Bolsonaro, hitting a 12-year-high in 2020 as an area seven times the size of London was cut down, according to national space research agency Inpe. Last year the region also recorded the most fires since 2017, Inpe data show.

Preliminary Inpe data show deforestation rose a further 25% in the first five months of 2021 from a year ago.

Scientists warn the risk for fires is greater this year due to extreme drought, with many parts of the Amazon recording drier weather than last year.

Between September and May, hydroelectric plants across the country have reported the lowest water inflows in 91 years, according to the Mines and Energy Ministry.

"To make matters worse, this is a year affected by La Niña, which especially makes it dry in the southern Amazon – which expands the window of deforestation and burning," said the non-profit Amazon Environmental Research Institute (IPAM) in a statement.

Fire season, which generally peaks in August and September, is beginning to accelerate, with 23 major fires recorded so far this year, according to Matt Finer, who leads a fire tracking project for the Amazon Conservation non-profit. All the fires have been in Mato Grosso state at the southeastern edge of the Amazon, Finer said.

Bolsonaro issued this year's fire ban in a decree published in the official government gazette on Tuesday. The decree redeploying the military was published Monday night.

This military deployment will be much more focused than past deployments restricted to 26 municipalities in four states - Amazonas, Mato Grosso, Pará and Rondônia. The most recent past deployment, which ended in April, was for the entire Amazon region.

Bolsonaro authorized the current deployment until the end of August.