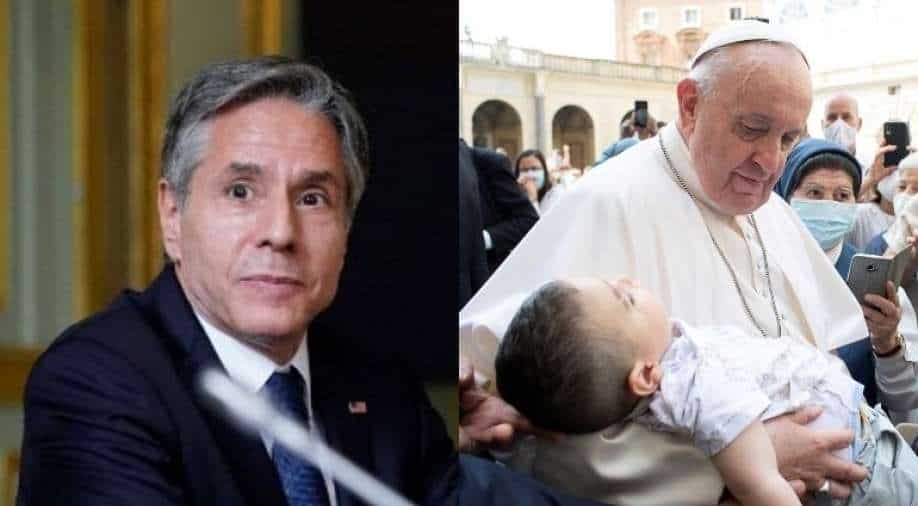 It will also set the scene for a visit to the pope by Joe Biden, only the second Catholic US president, expected for October

The last time a US secretary of state visited the Vatican, the diplomatic sparks flew and Pope Francis declined to receive Mike Pompeo.

When Antony Blinken meets the pope and top Vatican officials on Monday, the new secretary of state's visit will put relations between Washington and Holy See on a new footing.

It will also set the scene for a visit to the pope by Joe Biden, only the second Catholic US president, expected for October.

The visit follows a conference at which US Roman Catholic bishops voted to draft a statement on Communion that may admonish Catholic politicians, including Biden, who support abortion rights despite opposing the practice personally.

He irked the Vatican before arriving, saying on Twitter and in an editorial that it was "endangering its moral authority" by continuing a bilateral deal with China over the appointment of bishops there.

Pompeo published the editorial in a conservative Catholic journal that has been highly critical of Pope Francis and whose editor in 2019 wrote a long critique titled "A Failing Papacy".

One Vatican official rebuked Pompeo for violating "one of the rules of diplomacy" by making public demands. Another said his request for an audience with the pope was denied because it was too close to the US presidential election and the Vatican did not want it used for domestic political purposes.

"Pompeo did an own goal on China. The way he broached it in such a brusque, arrogant way made it easier for the Vatican to justify the renewal of the deal," said Massimo Franco, a columnist for Italy's Corriere della Sera who has written extensively on US-Vatican relations.

"The Biden administration will be much more subtle in reminding the Vatican about freedom of religion in China," Franco told Reuters.

After NATO took a tough line on China at Biden's debut summit, Washington could press the Vatican to be more outspoken on human rights in China and Hong Kong, said Alberto Melloni, an Italian Church historian and advisor to the European Commission.

"The question is 'will the US let the Vatican be exempt from criticising China just because of its deal on the bishops'?" he told Reuters.

One of the main points of contention between the Vatican and the White House, while Donald Trump was US president, was climate change. Trump was dismissive of the problem as he dismantled climate policies and regulations on fossil fuels.

The pope criticised Trump's withdrawal of the United States from the 2015 Paris accord to limit global warming. The Vatican welcomed Biden's return to the accord.

Francis, who in May received Biden's climate envoy, Roman Catholic John Kerry, has urged nations to work together to save the planet.

"We see working together (with the Vatican) as an opportunity to raise countries' collective ambition and to address the climate crisis by raising and implementing national emissions reduction targets, for instance," said Philip Reeker, acting assistant secretary of state for European and Eurasian affairs.

The Vatican will host world religious leaders and scientists before the United Nations Climate Change Conference (COP26) in November in Britain, which many expect the pope to attend.

In another scratchy moment, the pope criticised Trump's pledge to build a wall along the US-Mexican border as "not Christian". Trump said it was "disgraceful" for the pope to question his faith but later called him "a wonderful guy". They met at the Vatican in 2017.