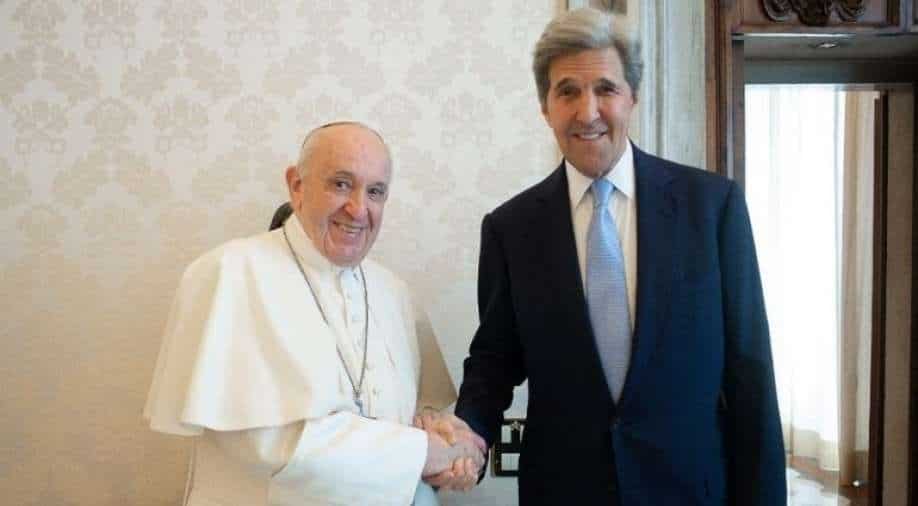 But because he is above politics and outside of national conflicts, I think he can shake people up a little bit and bring them to the table of dialogue with a better sense of our common duty

Pope Francis is a "convincing moral authority" in the fight against climate change, the US' special climate envoy John Kerry told Vatican News Saturday after a meeting with the pontiff.

"But because he is above politics and outside of national conflicts, I think he can shake people up a little bit and bring them to the table of dialogue with a better sense of our common duty."

Kerry, who is on a European tour that will take him to Britain and Germany after Rome, met with the Argentine pope at the Vatican a day after a meeting with Prime Minister Mario Draghi.

"The Pope is one of the great voices of reason and a convincing moral authority on the issue of the climate crisis," Kerry said, adding he believed the pontiff would be attending November's United Nations Climate Change Conference in Glasgow.

"We need everybody in this fight. All the leaders of the world need to come together and every country needs to do its part," he said.

The pope has called climate change "one of the principal challenges facing humanity" today. He has rebuked industrialised countries most responsible for the crisis while speaking up for the poor in developing countries who will feel its worst effects.

Last month, US President Joe Biden announced that the world's largest economy would cut emissions blamed for climate change by 50 to 52 per cent by 2030 compared with 2005 levels, doubling the country's previous commitments.

Kerry, a former senator who served as secretary of state under President Barack Obama, has said the next six months will be critical in shoring up support to upgrade commitments in the 2015 Paris Agreement.

The summit in Glasgow, he said in April, was "our last best hope to be able to coalesce the world in the right direction."