Biden to announce that US will move to revoke 'most favoured nation' trade status for Russia: Report 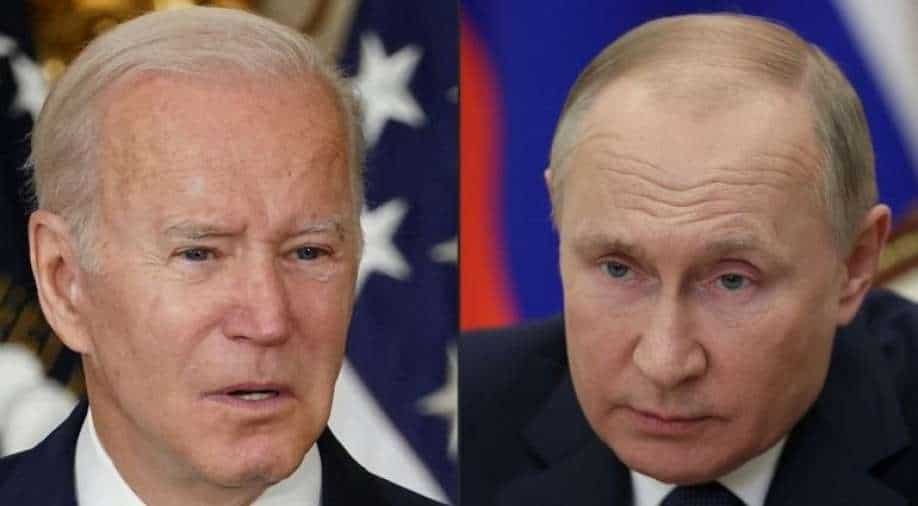 In this combination of images, US President Joe Biden can be seen along with Russian President Vladimir Putin. Photograph:( AFP )

Stripping Russia of its favoured nation status paves the way for the United States and its allies to impose tariffs on a wide range of Russian goods, which would further ratchet up pressure on an economy that is already heading into a 'deep recession'

President Joe Biden is poised to announce the revocation of Russia’s “most favoured nation” trade status, which would allow higher tariffs to be imposed on some Russian imports, as per US media.

He will announce the plans "to continue to hold Russia accountable for its unprovoked and unjustified war on Ukraine" at the White House at 10:15 a.m. EST (1515 GMT), as per CNN.

Stripping Russia of its favoured nation status paves the way for the United States and its allies to impose tariffs on a wide range of Russian goods, which would further ratchet up pressure on an economy that is already heading into a "deep recession."

In the United States, removing Russia's "Permanent Normal Trade Relations" (PNTR) status will require an act of Congress, but lawmakers in both houses - and on both sides of the political aisle - have already signalled their support.

"I believe the Russians, the inhumane behavior of Russia does not justify it to get the fruits of the international community," said Senate Finance Chairman Ron Wyden.

Unbowed by the sanctions, Russia kept up its bombardment of besieged Mariupol while Kyiv braced for an onslaught, its mayor boasting that the capital had become practically a fortress protected by armed civilians.

Also see | Why has Ukraine been able to stall Russian advance?

The head of the Kyiv Region administration, Oleksiy Kuleba, said a missile hit the town of Baryshivka, about 20 kilometers east of Kyiv’s main international Boryspil Airport.

“They have a clear order to hold Mariupol hostage, to mock it, to constantly bomb and shell it,” Ukrainian President Volodymyr Zelensky said in his nightly video address to the nation.

The number of refugees fleeing Ukraine has topped 2.3 million, and some 100,000 people have been evacuated during the past two days from seven cities under Russian blockade in the north and center of the country, including the Kyiv suburbs, Zelensky said.

Zelensky told Russian leaders that the invasion will backfire as their economy is strangled.

Western sanctions have already dealt a severe blow, causing the ruble to plunge, foreign businesses to flee and prices to rise sharply.

“You will definitely be prosecuted for complicity in war crimes,” Zelensky said in a video address, adding that “you will be hated by Russian citizens.”

Putin dismissed such talk, saying the country has endured sanctions before.

″We will overcome them,” he said at a televised meeting of government officials, but acknowledged the sanctions create “certain challenges.”

In 2019, Russia was the 26th largest goods trading partner of the United States, with some $28 billion exchanged between the two countries, according to the US Trade Representative's office.