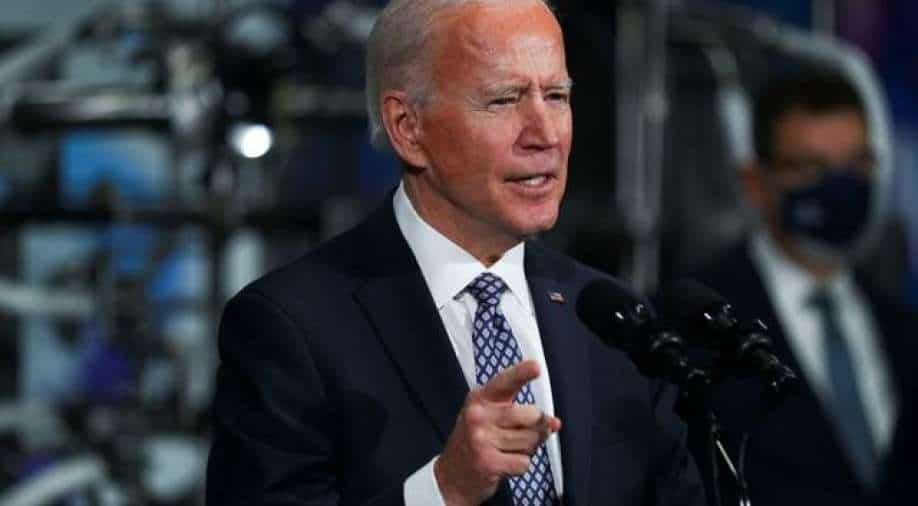 In a deal announced at the so-called Quad Summit, a virtual meeting of leaders of the four countries, the Biden administration committed to providing financial support to help Biological E, a major vaccine manufacturer in India, produce at least 1 billion doses of coronavirus vaccines by the end of 2022.

In a deal announced at the so-called Quad Summit, a virtual meeting of leaders of the four countries, the Biden administration committed to providing financial support to help Biological E, a major vaccine manufacturer in India, produce at least 1 billion doses of coronavirus vaccines by the end of 2022.

That would address an acute vaccine shortage in Southeast Asia and beyond without risking domestic political blowback from exporting doses in the coming months, as Americans clamor for their shots.

The United States has fallen far behind China, India and Russia in the race to marshal coronavirus vaccines as an instrument of diplomacy. At the same time, Biden is facing accusations of vaccine hoarding from global health advocates who want his administration to channel supplies to needy nations that are desperate for access.

Insisting that Americans come first, the president has so far refused to make any concrete commitments to give away U.S.-made vaccines, even as tens of millions of doses of the vaccine made by the British-Swedish company AstraZeneca sit idly in U.S. manufacturing facilities.

In fact, the president has a lot of work ahead of him domestically to make good on the promises he has made in recent days: that all states must make all adults eligible for vaccinations by May 1, that enough vaccine doses will exist by the end of May to inoculate every American adult, and that by July 4, if Americans continue to follow public health guidance, life should be returning to a semblance of normalcy.

Vaccine supply appears on track to fulfill those goals, but the president must still create the infrastructure to administer the doses and overcome reluctance in large sectors of the population to take them.

Still, Biden has also made restoring U.S. leadership a centerpiece of his foreign policy agenda after his predecessor frayed alliances and strained relationships with allies and global partners. His secretary of state, Antony Blinken, said in a recent BBC interview that a global vaccination campaign would be part of that effort; Washington, he said, was “determined” to be an “international leader” on vaccinations.

“It’s time for U.S. leaders to ask themselves: When this pandemic is over, do we want the world to remember America’s leadership helping distribute lifesaving vaccines, or will we leave that to others?” said Tom Hart, the North America executive director of the One Campaign, a nonprofit founded by U2 singer Bono and dedicated to eradicating world poverty.

The federal government has purchased 453 million excess vaccine doses, the group says. It has called on the Biden administration to share 5% of its doses abroad when 20% of Americans have been vaccinated, and to gradually increase the percentage of shared doses as more Americans receive their vaccines.

As of Friday, 13.5% of people in the United States who are 18 or older have been fully vaccinated, according to the Centers for Disease Control and Prevention.

The authoritarian governments of China and Russia, which are less buffeted by domestic public opinion, are already using vaccines to expand their spheres of influence. While the Biden administration plans its strategy to counter China’s growing global clout, Beijing is burnishing its image by shipping vaccines to dozens of countries on several continents, including in Africa, Latin America and particularly in its Southeast Asian backyard.

Russia has supplied vaccines to Eastern European nations, including Hungary, the Czech Republic and Slovakia, at a time when Biden officials want to keep the European Union unified against Russian influence on the continent.

“We may be outcompeted by others who are more willing to share, even if they’re doing it for cynical reasons,” said Ivo H. Daalder, a former NATO ambassador and the president of the Chicago Council on Global Affairs. “I think countries are going to remember who was there for us when we needed them.”

With worrisome and highly infectious new variants emerging in the United States and around the world, public health experts say vaccinating people overseas is also necessary to protect Americans.

“It has to be sold to Americans as an essential strategy to make Americans safe and secure over the long term, and it has to be sold to a highly divided, toxic America,” said J. Stephen Morrison, a global health expert at the Centers for Strategic and International Studies. “I don’t think that’s impossible. I think Americans are beginning to understand that in a world of variants, everything that happens outside our borders ups the urgency to move really fast.”

Blinken said as much to the BBC: “Until everyone in the world is vaccinated, then no one is really fully safe.”

The Quad Vaccine Partnership announced at the summit meeting on Friday involves different commitments from each of the nations, according to the White House.

Beyond assistance for the Indian vaccine manufacturer, the United States pledged at least $100 million to bolster vaccination capacity abroad and aid public health efforts. Japan, it said, is “in discussions” to provide loans for the Indian government to expand manufacturing of vaccines for export and will aid vaccination programs for developing countries. Australia will contribute $77 million to provide vaccines and delivery support with a focus on Southeast Asia.

The four countries will also form a Quad Vaccine Experts Group of top scientists and government officials who will work to address manufacturing hurdles and financing plans.

Morrison said the administration deserved “some credit” for the effort, adding, “It shows diplomatic ingenuity and speed.” But a spokesman for the One Campaign, which focuses on extreme poverty, said his group would still like to see a plan for the United States’ vaccine stockpile and noted that Africa had administered far fewer doses per capita than Asia.

Biden’s efforts to ramp up vaccine production have helped put the United States on track to produce as many as 1 billion doses by the end of the year — far more than necessary to vaccinate the roughly 260 million adults in the United States.

The administration has said those efforts are aimed at having enough vaccine for children, booster doses to confront new variants and unforeseen events. But Jeffrey Zients, Biden’s coronavirus response coordinator, told reporters Friday that the deal between Johnson &amp; Johnson and Merck would also “help expand capacity and ultimately benefits the world.”

In addition to resisting a push to give away excess doses, Biden has drawn criticism from liberal Democrats by blocking a request by India and South Africa for a temporary waiver to an international intellectual property agreement that would give poorer countries easier access to generic versions of coronavirus vaccines and treatments.

“I understand why we should be prioritizing our supply with Americans — it was paid for by American taxpayers, President Biden is president of America,” said Rep. Ro Khanna, a liberal Democrat from California. “But there is no reason we have to prioritize the profits of pharmaceutical companies over the dignity of people in other countries.”

Biden recently announced a donation of $4 billion to Covax, the international vaccine initiative backed by the World Health Organization. David Bryden, the director of the Frontline Health Workers Coalition, a nonprofit aimed at supporting health workers in low- and middle-income countries, said money was also desperately needed to help train and pay those workers to administer vaccines overseas.

But that donation, and the announcement Friday of the Quad’s financial support for vaccine production, still falls short of the urgent calls by public health advocates for the United States to immediately supply ready-to-use doses that can quickly be injected.

The Quad’s focus on Southeast Asia, however, most likely reflects an awareness of the gratitude to China in the region, which Beijing has made a focus of its vaccine distribution efforts.

If Biden is widely seen as helping the world recover from the coronavirus pandemic, it could become part of his legacy, as when President George W. Bush responded to the AIDS crisis in Africa in the 2000s with a huge investment of public health funding. More than a decade later, Bush and the United States remain venerated across much of the continent for the President’s Emergency Plan for AIDS Relief, or PEPFAR, which the government says spent $85 billion and saved 20 million lives.

Michael Gerson, a former White House speechwriter under Bush and a policy adviser who helped devise the PEPFAR program, said that its effect had been both moral and strategic, and that the program had earned the United States “a tremendous amount of goodwill” in Africa.

“I think the principle here should be that the people who need it most should get it no matter where they live,” he said. “It doesn’t make much moral sense to give a healthy American 24-year-old the vaccine before a front-line worker in Liberia.”

But, he added, “that’s very hard for an American politician to explain.”