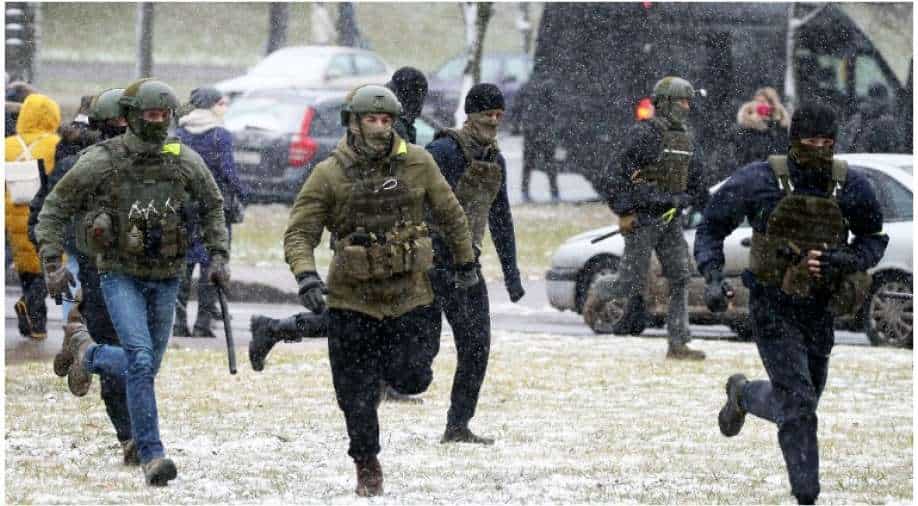 Law enforcement officers run to disperse demonstrators as they gather to protest against police violence and the Belarus presidential election results in Minsk, on November 29, 2020 Photograph:( AFP )

United Nations on Friday expressed its concern over Human Rights conditions in Belarus. The country has been roiled with protests in number of cities. UN rights chief Michelle Bachelet said that the human rights situation in Belarus has seen a "continued deterioration" in recent weeks.

"I regret to report that since the (UN human rights) council's urgent debate on Belarus in September, there has been no improvement in the human rights situation in the country. On the contrary, recent weeks have seen continued deterioration, particularly with respect to the right of peaceful assembly," she told the council.

Continuous protests have rocked Belarus ever since country's strongman Alexander Lukashenko claimed to have won sixth presidential term in elections held in August. The opposition alleges that the elections were rigged and political novice Svetlana Tikhanovskaya -- who ran against Lukashenko in the place of her jailed husband -- was the true winner of the polls. The country has seen widespread protests ever since.

In recent weeks, authorities imposed an intense crackdown in which hundreds were detained and protesters were prevented from gathering in central Minsk.

Bachelet pointed to reports that more than 27,000 people had been arrested since the August 9 vote, with around 1,000 reportedly arrested on November 8 and 700 on November 15.

Senior citizens were among some of the peaceful protesters taken into custody.

The UN High Commissioner for Human Rights decried "multiple and credible reports of people beaten by members of the security forces during and after their transport to police stations or detention centres," warning that such incidents could amount to torture.

She also voiced particular alarm over the "numerous allegations of torture and other cruel, inhuman or degrading treatment in custody," pointing to the some 2,000 complaints reportedly lodged by the end of October.

Among those rounded up since August were 373 journalists, including six who remain in detention, Bachelet said, stressing that lawyers associated with the opposition were also under pressure, with some facing criminal charges and others disbarred.

Most of the diplomats who participated in the hybrid session echoed Bachelet's concerns, denouncing police violence and the crackdown on protesters.

Some, including Russia, Iran, Cuba and Venezuela, came to Belarus's defence

Russian ambassador Gennady Gatilov reminded the council of police violence in a range of other countries, including in France and the United States.

"The champions of human rights are very discreet about all of that," he said.