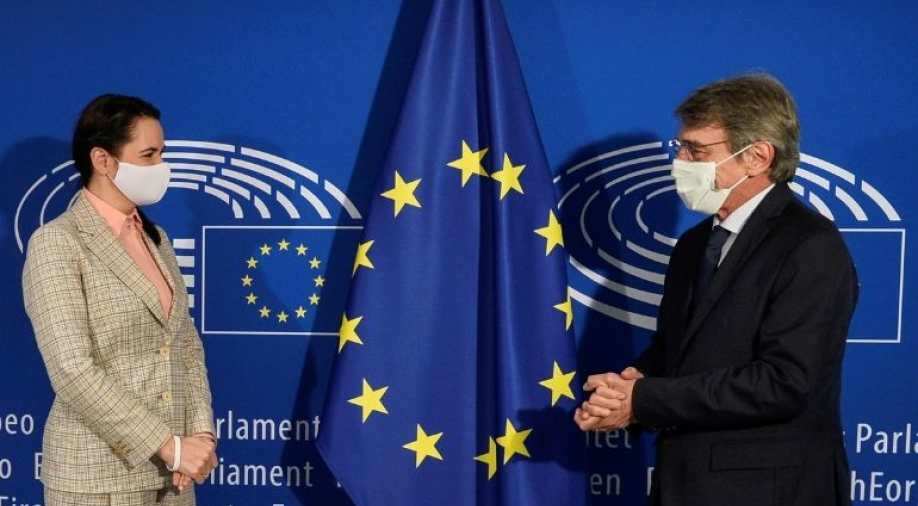 Tikhanovskaya met EU foreign ministers in Brussels and urged them to sanction Lukashenko but, despite repeated statements condemning the veteran strongman and warning of measures, after 44 days the bloc has yet to act.

Belarus opposition leader Svetlana Tikhanovskaya on Monday urged the EU to show courage and step up its support for her movement, as the bloc's internal squabbles about sanctions rolled on.

Tikhanovskaya met EU foreign ministers in Brussels and urged them to sanction Lukashenko but, despite repeated statements condemning the veteran strongman and warning of measures, after 44 days the bloc has yet to act.

"EU leaders have reasons not to push sanctions but I asked them to be more brave," Belarus opposition leader Sviatlana Tsikhanouskaya, who fled to Lithuania after the election, told reporters after meeting foreign ministers.

"Sanctions are important in our fight because it's part of pressure that could force the so-called authorities to start dialogue with us in the opposition council."

The EU said in late August it would impose asset freezes and travel bans on Belarusian officials. But sanctions require agreement among all 27 member states, and the Belarus issue has become entangled in a debate over separate sanctions against Turkey, sought by Cyprus in a dispute over energy resources.

The former Soviet republic has been convulsed by unprecedented demonstrations against President Alexander Lukashenko since he was returned to power in a disputed August 9 election and launched a brutal crackdown.

Cyprus says it supports sanctions on Belarus but wants the bloc to act over Turkey as well.

"Our reaction to any kind of violation of our core, basic values and principles cannot be a la carte. It needs to be consistent," Foreign Minister Nikos Christodoulides said.

EU leaders will discuss the Cyprus issue on Thursday at a summit. EU diplomats say Germany is concerned sanctions would undermine diplomatic progress in easing tension with Ankara.

Lithuania's Foreign Minister Linas Linkevicius, one of the strongest advocates for Belarus sanctions, said he hoped other EU countries "will not keep the European Union in limbo and will not take (it) hostage".

The presidents of Lithuania, Poland and Romania said on Monday they will ask EU leaders at this week's summit to offer an economic support package for Belarus if it holds a democratic election. That would include a favourable trade regime with the EU, visa-free travel and support as a candidate for the World Trade Organization.