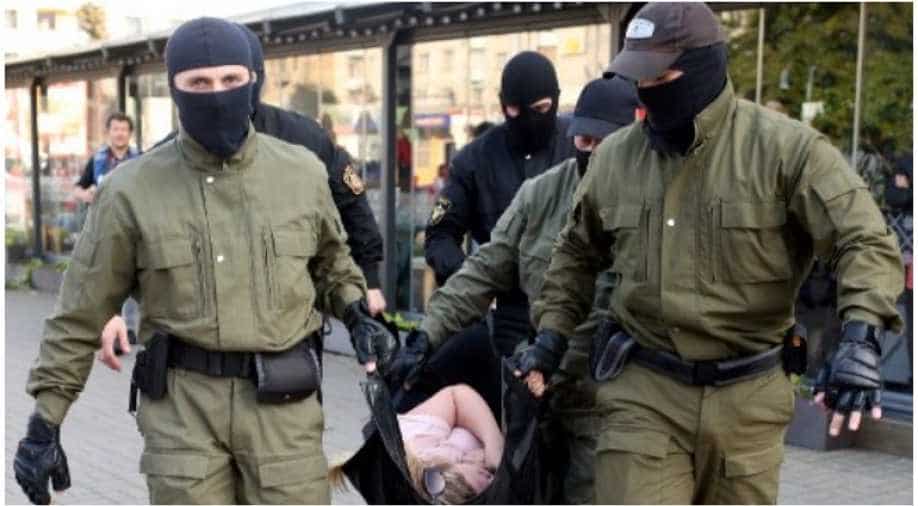 Law enforcement officers carry a woman to be transported by ambulance during a rally to protest against the Belarus presidential election results in Minsk on September 19, 2020. Photograph:( AFP )

The development was reported by opposition websites that posted videos and photos of convoy of trucks being mobilised towards central Minsk.

Latest opposition protests were scheduled to take place at 1100 GMT (4:30 pm IST). As the hour drew closer, military trucks were moved by the authorities to central Minsk. The development was reported by opposition websites that posted videos and photos of convoy of trucks being mobilised towards central Minsk.

The latest protests were planned after riot police cracked down on a march taken out by women protesters on Saturday.

Lukashenko's opponent Svetlana Tikhanovskaya who has taken refuge in Lithuania, had praised the "brave women of Belarus".

"They are marching despite being constantly menaced and put under pressure," she said in a statement she released ahead of the march.

Riot police cracked down on the protesters. The women were dragged into vans, some of them were even lifted off their feet by the riot police. Viasna rights group released an online list of names of 217 women detained. The group said that the list was being updated.