Barrett’s testimony is a deft mix of expertise and evasion 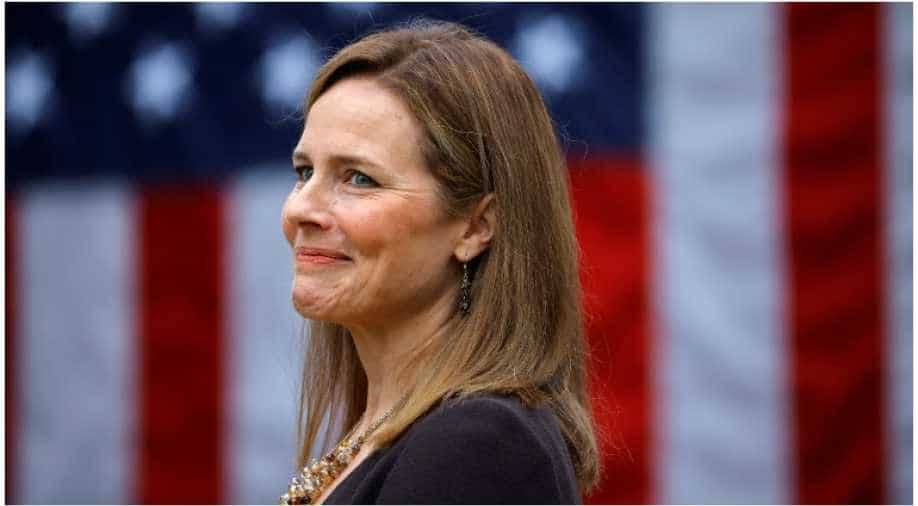 She would not say how she would rule in potential cases on abortion, the election and same-sex marriage

“The safest and surest route to the prize,” she wrote, “lay in alternating platitudinous statement and judicious silence.”

Judge Amy Coney Barrett expertly followed that playbook at her confirmation hearings Tuesday, in her first day of answering questions from the Senate Judiciary Committee. Speaking without notes, she gave sure-footed accounts of Supreme Court precedents and then, almost without exception, declined to say whether the decisions were correct.

Barrett was patient, calm, a little stern and sometimes surprisingly terse when she spoke about the law, easily parrying most questions from the Democratic senators who tried to put her on the spot.

She would not say how she would rule in potential cases on abortion, the election and same-sex marriage — or a pending one on the Affordable Care Act.

Barrett’s stance was in line with the approach of nominees since Judge Robert H. Bork’s answers at his 1987 confirmation hearings helped doom his nomination.

Nominated by President Ronald Reagan, a Republican, Bork gave extended answers to the senators’ questions, in tones that struck some as candid and thoughtful and others as prickly and arrogant. Democrats said his legal views, particularly his skepticism about the constitutional right to privacy, were extreme and signaled hostility to abortion rights.

The Senate, which was controlled by Democrats, defeated the nomination by a 58-42 vote. That was the largest margin by which it had ever rejected a Supreme Court nomination, and it was the last time the Senate has voted down a nominee for the court.

But Kagan, in her 1995 article, said the hearings were a high-water mark.

“The Bork hearings presented to the public a serious discussion of the meaning of the Constitution, the role of the court and the views of the nominee,” she wrote. “Subsequent hearings have presented to the public a vapid and hollow charade, in which repetition of platitudes has replaced discussion of viewpoints, and personal anecdotes have supplanted legal analysis.”

Barrett seemed to have studied recent hearings carefully, absorbing their lessons. They were presciently summarized in a 1981 memorandum written by a young White House lawyer named John Roberts, who helped prepare Justice Sandra Day O’Connor, another Reagan nominee, for her confirmation hearings.

“The approach was to avoid giving specific responses to any direct questions on legal issues likely to come before the court,” the memo said, “but demonstrating in the response a firm command of the subject area and awareness of the relevant precedents and arguments.”

Also read| Trump's Supreme Court pick says she is not 'hostile' to Obamacare, dodges on abortion

Roberts took his own advice at his confirmation hearings in 2005. Some said he retired the trophy. Barrett held her own, too.

“I do want to be forthright and answer every question,” she said when asked about whether two key abortion precedents had been correctly decided. But she said she could not describe her views.

“It would be wrong of me to do that as a sitting judge,” she said. “Whether I say I love it or I hate it, it signals to litigants that I might tilt one way or another in a pending case.”

Nor would she say if the Supreme Court’s 2015 decision establishing a right to same-sex marriage might be overturned, as Justices Clarence Thomas and Samuel Alito seemed to urge this month.

Barrett acknowledged that she had written and spoken critically of the reasoning in the controlling opinions in two Supreme Court decisions upholding major provisions of the Affordable Care Act. But she said the key issue in the latest challenge, to be argued next month, presented a different issue.

That is correct: The central question now is whether the entire law must fall because Congress in 2017 zeroed out the penalty for failing to obtain health insurance. Barrett said she had expressed no view on that issue.

“I assure you I am not hostile to the ACA,” she said.

And she invoked Kagan, whose views had evolved by the time she appeared before the committee in 2010 for her own confirmation hearings, having been nominated by President Barack Obama, a Democrat. “She said that she was not going to grade precedent or give it a thumbs-up or thumbs-down,” Barrett said, paraphrasing Kagan.

At her confirmation hearing in 1993, Ginsburg distilled the responsibilities of nominees into a pithy phrase: “no hints, no forecasts, no previews.”

As it happened, though, Ginsburg was quite forthcoming during her hearing about her views on abortion. The main exception to the Ginsburg rule, at least where abortion was concerned, was Ginsburg.

“The decision whether or not to bear a child is central to a woman’s life, to her well-being and dignity,” Ginsburg said of abortion at her hearings. “It’s a decision that she must make for herself. When government controls that decision for her, she’s being treated as less than a fully adult human, responsible for her own choices.”

In general, though, Ginsburg had taught a master class in avoiding direct responses to senators’ questions, Kagan wrote in her 1995 article.

“Justice Ginsburg’s favored technique took the form of a pincer movement,” Kagan wrote. If a question was too specific, she would decline to answer on the ground that she did not want to forecast a vote. If it was too general, she would say a judge should not deal in abstractions or hypothetical questions.

Barrett recited the usual factors for considering whether a precedent should be overruled: whether people had come to rely on it in ordering their affairs, whether it was workable in practice and whether it has been undermined by later decisions or factual developments. She would consider those factors, she said, for “abortion or anything else.”

She made an exception for Brown v. Board of Education, the landmark 1954 school desegregation case. That was a “super-precedent,” she said, “one that is so well-established that it would be unthinkable that it would ever be overruled.”

Barrett refused to say whether she would recuse herself from the case on the health care law or potential ones arising from the election next month. She would, she said, consider judicial ethics rules and consult with her colleagues.

“I certainly hope that all members of the committee have more confidence in my integrity than to think that I would allow myself to be used as a pawn to decide this election for the American people,” she said.

She was adamant that she had made no promises about how she would rule: “I have made no commitment to anyone, not in the Senate, not over at the White House, on how I would decide any case.”