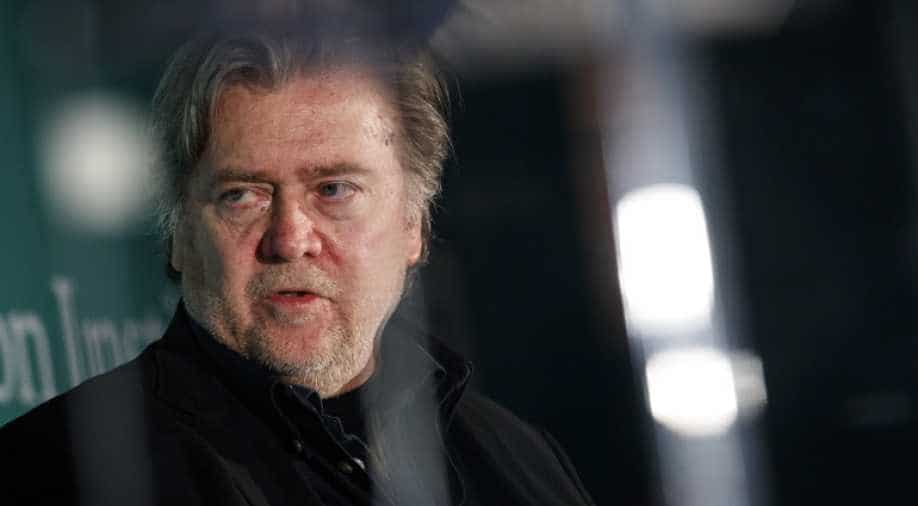 Bannon, 64, was a powerful figure in the Trump election campaign and the White House in the early months of Trump`s presidency. Photograph:( AFP )

Former White House strategist Steve Bannon was expected to be peppered with questions on the Trump campaign`s links to Russia in closed testimony to the House Intelligence Committee Tuesday.

Bannon, who has been mostly quiet since the release of an incendiary book about President Donald Trump in which he figured prominently as a source, was seen arriving in Congress for the hearing early Tuesday.

His insider role during the Trump election campaign and in the White House could provide crucial details to the committee, which is seeking to understand the extent of contact between Trump and his advisors and Russia, which is accused of interfering with the 2016 election.

It come after the release of "Fire and Fury: Inside the Trump White House," by Michael Wolff, who notably quotes Bannon as saying a pre-election meeting involving Trump`s eldest son Donald Jr. and a Kremlin-linked Russian lawyer was "treasonous."

Bannon allowed Wolff, who painted a picture of an erratic and poorly informed president, substantial access to the White House during Trump`s first year.

Bannon, 64, was a powerful figure in the Trump election campaign and the White House in the early months of Trump`s presidency, pushing a hard-line nationalism aimed at shaking up US domestic and foreign policy.

But he was forced out from his job advising Trump in August, and his actions since then -- most notably supporting the failed Senate campaign of Alabama Republican Roy Moore, but also his comments in the Wolff book -- have left him increasingly isolated in conservative circles.

Last week he was forced to step down from Breitbart News, which he had helped make a powerful conservative force, and he lost the support of the Mercer family, wealthy conservative power brokers.

Underscoring the break, Trump said Bannon had "lost his mind" and branded him "Sloppy Steve" via Twitter.