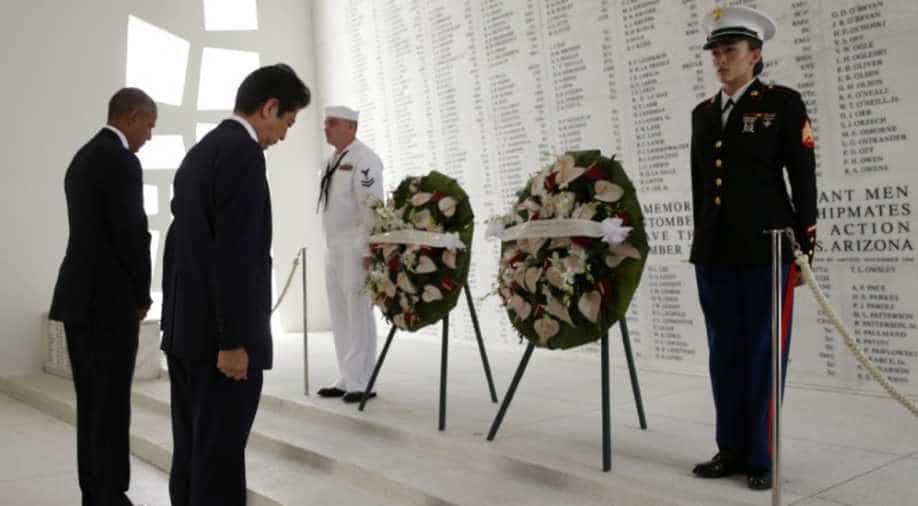 Abe and Obama stood solemnly in front of a wall inscribed with the names of those who died in the 1941 attack and took part in a brief wreath-laying ceremony, followed by a moment of silence. Photograph:( Reuters )

Japanese Prime Minister Shinzo Abe visited Pearl Harbor on Tuesday and offered his condolences for victims of the 1941 attack in a historical first visit for the Japanese leader.

In a joint visit to the sunken battleship USS Arizona with US President Barack Obama, Abe pledged Japan will never wage war again.

"President Obama, the people of the United States of America and the people around the world, as the prime minister of Japan I offer my sincere and everlasting condolences to the souls of those who have lost their lives here," Abe said.

“We must never repeat the horrors of war again. This is the solemn vow we, the people of Japan, have taken.

“To the souls of the servicemen who lie in eternal rest aboard the USS Arizona, to the American people, and to all the peoples around the world, I pledge that unwavering vow here as the prime minister of Japan.”

Abe became the first Japanese prime minister to visit the memorial, a centrepiece of the historic site.

The two leaders took part in a wreath-laying ceremony followed by a moment of silence.

"In Remembrance, Shinzo Abe, Prime Minister of Japan" was written on one wreath and "In Remembrance, Barack Obama, President of the United States" on the other. Pearl Harbor was attacked on the morning of December 7, 1941.

"I welcome you here in the spirit of friendship," Obama told Abe. "I hope that, together, we send a message to the world that there is more to be won in peace than in war, that reconciliation carries more rewards than retribution."

"Even when hatred burns hottest, even when the tug of tribalism is at its most primal, we must resist the urge to turn inward," Obama said against the backdrop of the USS Arizona, AFP reported.

Obama became the first US president in May this year to visit Hiroshima, the target of a 1945 US nuclear bomb.

Japan hopes to present a strong alliance with the United States amid concerns about China's expanding military capability, Reuters reported.

"I don't think there is any feeling of antipathy towards the Japanese, 75 years after the attack."