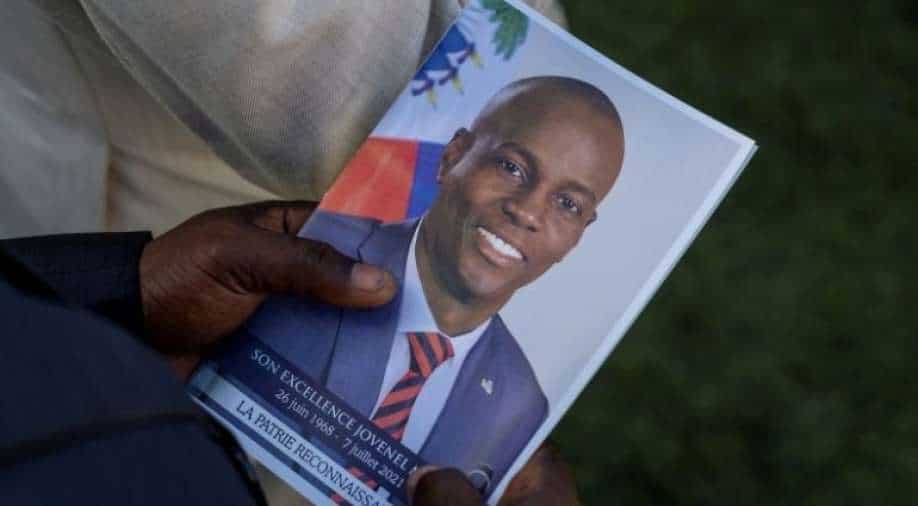 A person holds a photo of late Haitian President Jovenel Moise, who was shot dead earlier this month, during his funeral at his family home in Cap-Haitien, Haiti, July 23, 2021. Photograph:( Reuters )

The mastermind behind the assassination of President Jovenel Moïse of Haiti is most likely still at large, the country’s caretaker leader says. He remains baffled by the motive, he says, and doubts that the conspirators accused of plotting the killing had the ability to pull it off on their own.

"I think there were a lot of people involved; there were people with access to a lot of money," Prime Minister Ariel Henry said Tuesday at his residence in the capital, Port-au-Prince. "The people they have accused up until now, I don’t see that they have the capacity, the web, to do it."

More than 40 people have been detained after Moïse was shot 12 times and his wife seriously injured July 7 by a group of assailants who stormed into their bedroom. The police and the prosecutor’s office continue to issue warrants for new suspects on a near daily basis. Some of the detainees have been charged, but none have been brought to court.

Few in Haiti believe the authorities have yet closed in on the people who organized and financed the complex plot. It appears to have been planned for months in Florida and Haiti and involved flying in two dozen Colombian ex-commandos to the country.

Although the president had many enemies, Henry, who was appointed by Moïse shortly before his death, said he remained baffled by the crime’s ultimate motive.

Also read | Exile headquarters: Why is Miami the 'hotbed' of Latin American assassinations and coup?

"Maybe I'm at risk, too, from the people who killed him," Henry said. "Could they do it again? I don’t know."

The opposition had said that Moïse’s five-year term should have ended Feb. 7, five years to the day since his predecessor, Michel Martelly, stepped down. But Moïse had clung to power, ruling by decree. He argued that an interim government had occupied the first year of his term. Protesters took to the streets of Haiti demanding his removal.

But Moïse had said he would not seek another term in the general elections scheduled for Sept. 26 and had been expected to step down seven months before the killing.

Claude Joseph, then the prime minister, took control of Haiti’s government immediately after the assassination, but pressure from foreign powers led to an agreement to let Henry, 71, take office July 21.

On Monday, Port-au-Prince’s chief prosecutor began issuing the first charges in the assassination investigation. The arrested suspects — who include Moïse’s security chiefs, the Colombian ex-commandos and Haitian businessmen — have been moved to a jail in preparation for trial. But despite some progress, the investigation has been mired from the start in irregularities and attempts at subversion.

Henry said his main goal now was to hold free and fair elections to stabilize the country. He said he was in talks with political parties and civil leaders to appoint a new electoral board and draft a new Constitution that will be presented to voters for approval.

He promised to improve Haiti’s dire security crisis before the vote: Swaths of the capital remain in the control of the gangs. He also ruled out requesting troop assistance in preparation for the vote from allies, including the United States, saying that the task would be handed by the national police.

Henry said he would not run for office in the elections. Despite the challenges of guiding the country through a political and security crisis, he said, he continues to practice his main profession, as a neurosurgeon. He will perform his next surgery Thursday.

“My mission is to set an environment for elections with a large participation,” he said, adding that he hoped the vote would help to break Haiti’s chronic political instability. “If we can have one, two democratic transfers of power, Haiti will be fine.”

But, raising a note of uncertainty, the caretaker prime minister said Haiti’s security and political challenges made the expected election date, Sept. 26, unlikely. He declined to provide a new time frame.

His ambivalence on keeping the election date has been criticized by some Haitian politicians, who say the country needs a road map to a new government to avoid mass unrest in the aftermath of Moïse’s murder.

“If they don’t hold the elections before 2022, this country will explode,” said Mathias Pierre, Moïse’s former minister of elections, who had organized this year’s vote until the president’s death. “It’s a volcano burning inside.”