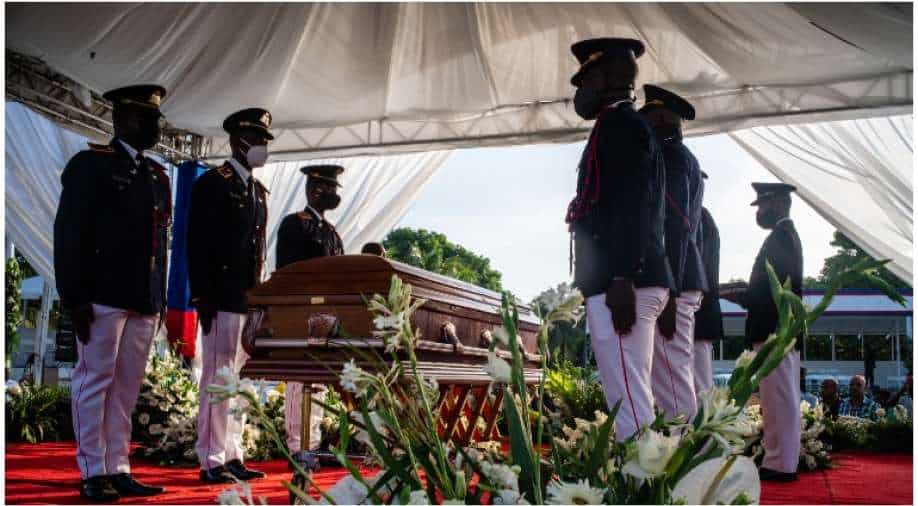 The funeral of Haiti’s assassinated president, Jovenel Moïse, at his family homestead on the outskirts of Cap-Haitien, Haiti on Friday, July 23, 2021. Photograph:( The New York Times )

As the flag-covered coffin President Jovenel Moïse was brought onto a central stage lined with white curtains, carried by men in military uniforms, a moment that many had hoped would help promote reconciliation was overshadowed by tensions that had exploded in the streets the day before

Heckled by protesters and surrounded by phalanxes of heavily armed guards, foreign diplomats and Haitian politicians attended the funeral of Haiti’s assassinated president Friday at his family homestead, an event that laid bare a fractured nation’s problems instead of providing an opportunity for healing.

Less than a half-hour into the funeral, the U.S. delegation, led by Linda Thomas-Greenfield, the U.S. ambassador to the United Nations, departed. It was not immediately clear why but there were unconfirmed reports of shooting outside, raising additional security concerns.

As the flag-covered coffin President Jovenel Moïse was brought onto a central stage lined with white curtains, carried by men in military uniforms, a moment that many had hoped would help promote reconciliation was overshadowed by tensions that had exploded in the streets the day before.

A line of Moïse’s supporters stood by the entrance and yelled at arriving politicians, shouting “Justice for Jovenel!”

When Haiti’s national police chief, Leon Charles, arrived, the crowd surged around him and erupted into shouting and finger pointing. As he passed a grandstand of invited guests, many there also jumped to their feet to holler their displeasure.

“He killed the president!” shouted Marie Michelle Nelcifor, adding that she believed Moïse had telephoned Charles while assassins attacked his home but that Charles had not sent police officers to defend him. “Where were the security guards?” she asked.

Others were angry that the president would be buried before the investigation into his assassination was completed. “They are burning him surrounded by his assassins!” shouted Kettie Compere, a mother of two looking up at the grandstand of diplomats and Haitian politicians where Charles had settled.

When Martine Moïse, the president’s widow, arrived dressed in black with a large black hat and a mask with a photo of her husband affixed to it, the crowd surged around her, singing “arrest them, arrest them.”

In remarks after the delegation’s arrival at Cap-Haïtien’s airport earlier Friday, Thomas-Greenfield said: “Our delegation is here to bring a message to the Haitian people: You deserve democracy, stability, security and prosperity, and we stand with you in this time of crisis. So, we come here in solidarity with the Haitian people during this difficult time.”

The July 7 killing of Moïse, 53, in the bedroom of his home near Port-au-Prince, the capital, has plunged the Caribbean nation of 11 million into one of its deepest crises. Officials have blamed a group of Colombian mercenaries, but many questions remain unanswered, including who planned the assassination and why no members of his security detail were hurt. Several members of that security detail have been questioned and taken into custody.

Pressured by Western countries led by the United States, Haiti’s other political leaders, jostling for power, have pledged an orderly transition and a democratic process. But it was clear even before the funeral that deep divisions would shape and possibly subvert what many hoped would be a venue for reconciliation.

Just hours earlier, the northern city of Cap-Haïtien — 30 minutes from his family homestead — had burned with anger and frustration, exposing Haiti’s the distrust of the elite in the country’s less developed north.

On Thursday, the streets billowed with the black smoke of burning tires, a common form of protest in a country split by geography, wealth and power. Large crowds of demonstrators ran though the narrow colonial streets, chanting, “They killed Jovenel, and the police were there.”

“We sent them someone alive; they sent him back a cadaver,” screamed Frantz Atole, a 42-year-old mechanic, promising violence. “This country is not going to be silent.”

A new government was installed in the capital this week, and its leaders vowed to get to the bottom of the killing and to build consensus among the country’s political factions and its civic groups.

Yet the unrest Thursday threatened to turn hopes of consensus into a naive, unrealized dream.

“The bourgeoisie from Port-au-Prince are responsible. They are the reason for all of this,” said Emmanuella Joseph, a 20-year-old secondary school student, crying into a face cloth on the side of the road at the tail end of a running protest.

She added that the president’s killers were outsiders who had long meddled with the country’s destiny. “What kind of nation comes and kills a president?”

Cap-Haïtien was once the capital of the French colony of St. Domingue, which claimed one of the most brutal slave plantation economies in the world and was later overwhelmed by the world’s most successful slave rebellion. Banners strung across its roads read “Justice for President Jovenel” and “Thank you President Jovenel. You gave your life for the people’s fight and it will continue.”

Just off the city’s main stone square, where rebel leaders were executed more than two centuries ago, mourners lined up Thursday to sign condolence books and light candles before a large photo of the president in a government building.

“We are living in a time that’s so fragile,” said Maxil Mompremier, standing outside the colonial-era Notre Dame de L’Assomption Cathedral, where Moïse’s supporters had gathered earlier for a service. “Nobody understands what happened. A lot of people are afraid.”

Hailing from the north of the country, Moïse was not well-known in the country’s power center of Port-au-Prince when the governing party chose him as its candidate in the 2015 election. He was born in the town of Trou-du-Nord, and later began his entrepreneurial career from Port-de-Paix, where he became president of the Chamber of Commerce.

That he was killed far away in Port-au-Prince inflamed old divisions between the less developed north and the country’s capital and economic center. It also deepened the rifts between the country’s small elite and its destitute majority.

“It comes back incessantly in all the history of Haiti,” said Emile Eyma Jr., a historian based in Cap-Haïtien, speaking of the resentment felt by northerners.